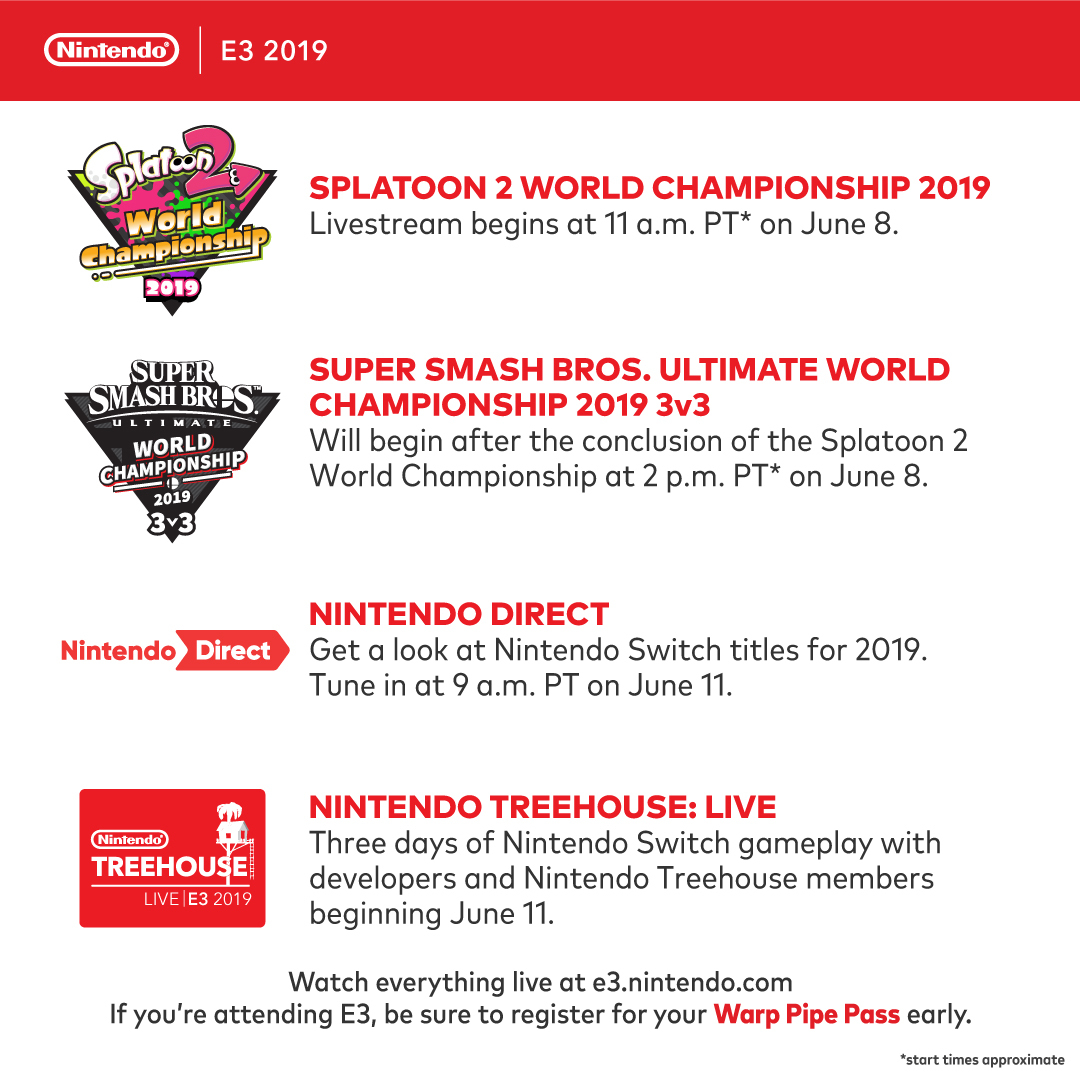 REDMOND, Wash.–(BUSINESS WIRE)–Nintendo has outlined its plans for the E3 2019 video game trade show, which takes place June 11-13 at the Los Angeles Convention Center. The weekend before the show includes two competitions featuring top players of the Super Smash Bros. Ultimate and Splatoon 2 games from around the world. Returning activities during the week include a Nintendo Direct presentation on the morning of June 11 and Nintendo Treehouse: Live—a daily livestream from E3 featuring live gameplay and in-depth analysis of games featured at E3. Nintendo will feature many playable Nintendo Switch games at its booth, and a new Warp Pipe Pass will help transport people to a priority access part of lines for select games.

“We’re starting with some heated competitions and delivering new content the whole week,” said Nintendo of America President Doug Bowser. “Whether people are attending the show in person or watching from home, our goal is to provide them with the best possible Nintendo experience.”

Some of Nintendo’s activities at E3 2019 include:

For the most up-to-date information about Nintendo’s presence at E3 2019, keep an eye on https://e3.nintendo.com/.

About Nintendo: The worldwide pioneer in the creation of interactive entertainment, Nintendo Co., Ltd., of Kyoto, Japan, manufactures and markets hardware and software for its Nintendo Switch™ system and the Nintendo 3DS™ family of portable systems. Since 1983, when it launched the Nintendo Entertainment System™, Nintendo has sold more than 4.7 billion video games and more than 740 million hardware units globally, including Nintendo Switch and the Nintendo 3DS family of systems, as well as the Game Boy™, Game Boy Advance, Nintendo DS™ family of systems, Super NES™, Nintendo 64™, Nintendo GameCube™, Wii™ and Wii U™ systems. It has also created industry icons that have become well-known, household names, such as Mario, Donkey Kong, Metroid, Zelda and Pokémon. A wholly owned subsidiary, Nintendo of America Inc., based in Redmond, Wash., serves as headquarters for Nintendo’s operations in the Americas. For more information about Nintendo, please visit the company’s website at https://www.nintendo.com.

Note to editors: Nintendo press materials are available at https://press.nintendo.com/, a password-protected site. To obtain a login, please register on the site.