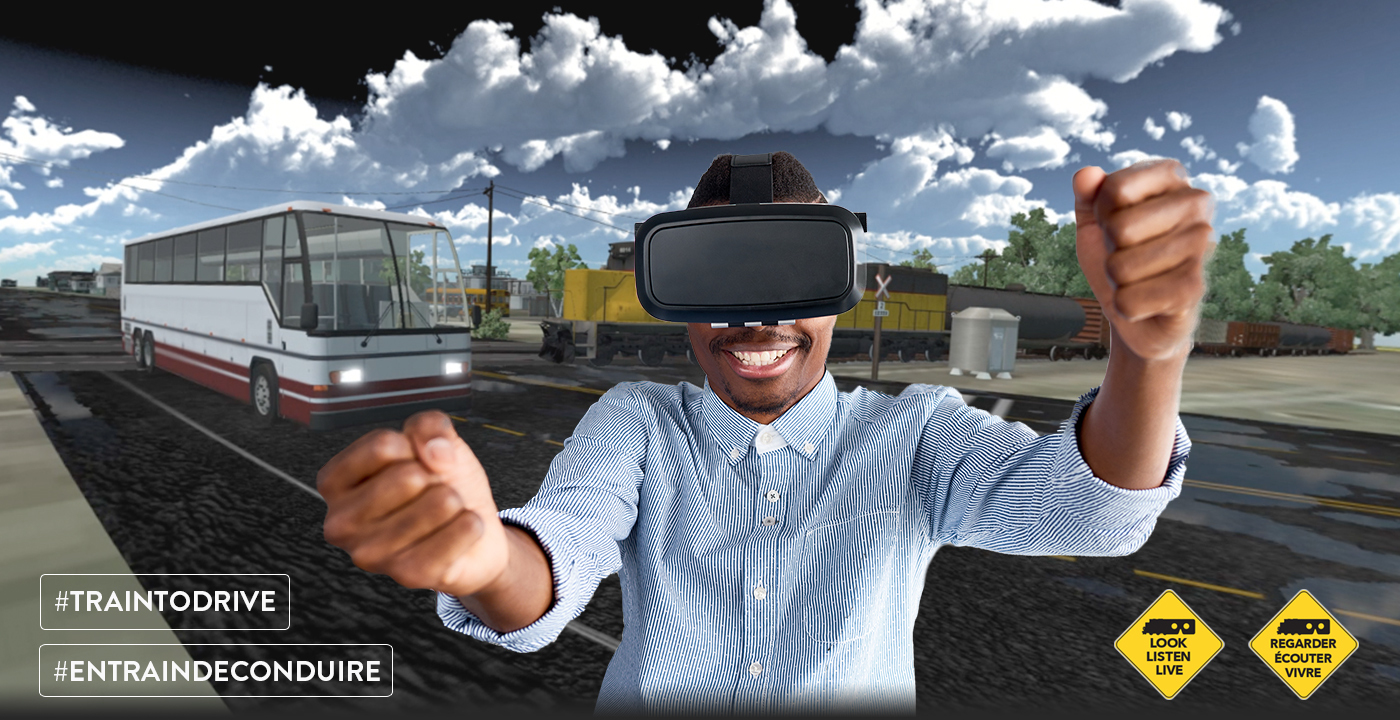 OTTAWA, Ontario–(BUSINESS WIRE)–#ILCAD–Bus and truck drivers play a vital role in connecting Canadian communities, and in moving Canada’s economy. Whether they’re transporting people or cargo, professional drivers need to make safety a priority — and knowing how to safely approach railway crossings is key.

Today, Operation Lifesaver — a national not-for-profit dedicated to rail safety — is raising awareness about Canada’s 40,000 rail crossings, and the hazards they can pose to bus and truck drivers specifically. To mark International Level Crossing Awareness Day, OL has unveiled two new Train to Drive virtual-reality (VR) videos, designed to test whether professional drivers know the rail safety rules and how to respond in life-or-death situations such as stalling on the tracks.

“Vehicle-train collisions can happen in a split second, with tragic consequences,” said Sarah Mayes, National Director of Operation Lifesaver Canada. “In designing these Train to Drive videos, we tried to incorporate some of the real-world challenges that bus and truck drivers face near tracks and trains, to actually test their decision-making abilities in real time.”

Collisions at road-rail crossings are tragically common in Canada. In 2018, there were 167 such incidents which killed 19 people and seriously injured another 42.

“Our hope is that drivers, trucking and bus companies, driving schools, and even governments will use this program, and that OL’s “Look. Listen. Live.” rail safety message will resonate with them,” said Mayes.

These latest videos will build on the success of the original Train to Drive program — designed for new and inexperienced Canadian drivers — which has been viewed 80,000 times since its launch in February 2019.

Professional drivers wishing to experience Train to Drive can visit TraintoDrive.ca, click on the “Professional Driver” tab, and play the embedded video. They’ll be asked to choose their “vehicle” — a motor coach or a transport truck — and will then face a series of virtual driving challenges, including poor road conditions near a crossing, and angled tracks with reduced sight lines. The Train to Drive website also provides instructions on how to view the VR videos on mobile phones or tethered headsets, and offers rail safety tips for professional drivers to use the next time they’re behind a real wheel.

Established in Canada in 1981, Operation Lifesaver is a national rail-safety public-awareness program sponsored by Transport Canada and the Railway Association of Canada and its members, including CN, CP, VIA Rail, Metrolinx, exo, West Coast Express and Genesee & Wyoming, among others. Through partnerships with safety councils, police, the trucking industry, labour and community groups, Operation Lifesaver works to save lives by educating Canadians about the hazards of rail crossings and trespassing on railway property. Members of the public are invited to follow OL on Facebook, Twitter and Instagram to keep up-to-date on the latest rail safety news.