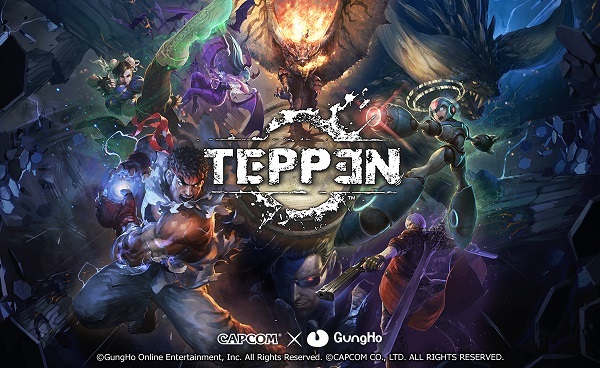 “TEPPEN” is the ultimate card battle created through a powerful tag-team collaboration between GungHo and Capcom—a collaboration that has culminated in a game featuring a comprehensive set of techniques and multiple popular Capcom characters. This battle game features an original story that unfolds with brand new, impressive illustrations for each of the TEPPEN heroes, and is a fusion of real-time gameplay that makes you feel as if you’re right in the action and turn-based strategy that plays out in a quick-paced battle of the minds. These features along with TEPPEN’s intuitive, easy-to-control battles result in a totally new experience for players.

The initial heroes that players will start with the game are Ryu and Chun-Li from the Street Fighter series, Rathalos and Nergigante from the Monster Hunter Series, X from Mega Man X series, Morrigan Aensland from the Darkstalkers series, Dante from the Devil May Cry series, and Wesker from the Resident Evil series. From today, Jill Valentine from the Resident Evil series will join the battle as a new Hero! More new Heroes are planned to be added in the future.

At TEPPEN Asia Japan Premiere, the first exhibition match with Pro Gamer has occurred, and they have announced events such as e-Sports and a World Championship supported by Amazon. Starting today, TV commercial “The Beginning of the Ultimate Battle” will be aired in Japan. New information of the update in the game is planned to be announced on the official website.

* Compatible with Android devices that have 2 GB RAM or more.
* Game images are from the development stage and may differ from the final versions.
* Android and Google Play logos are trademarks or registered trademarks of Google LLC.
* Apple and the Apple logo are trademarks of Apple Inc. registered in the United States and other countries. The App Store is an Apple Inc. service logo.
* Please always be aware of your surroundings and play with caution. Do not use your smartphone while driving or walking.
* Company name, logo mark, product name, and service name are trademarks or registered trademarks.
* Details listed above are as of the date of announcement. Details are subject to change without notice.