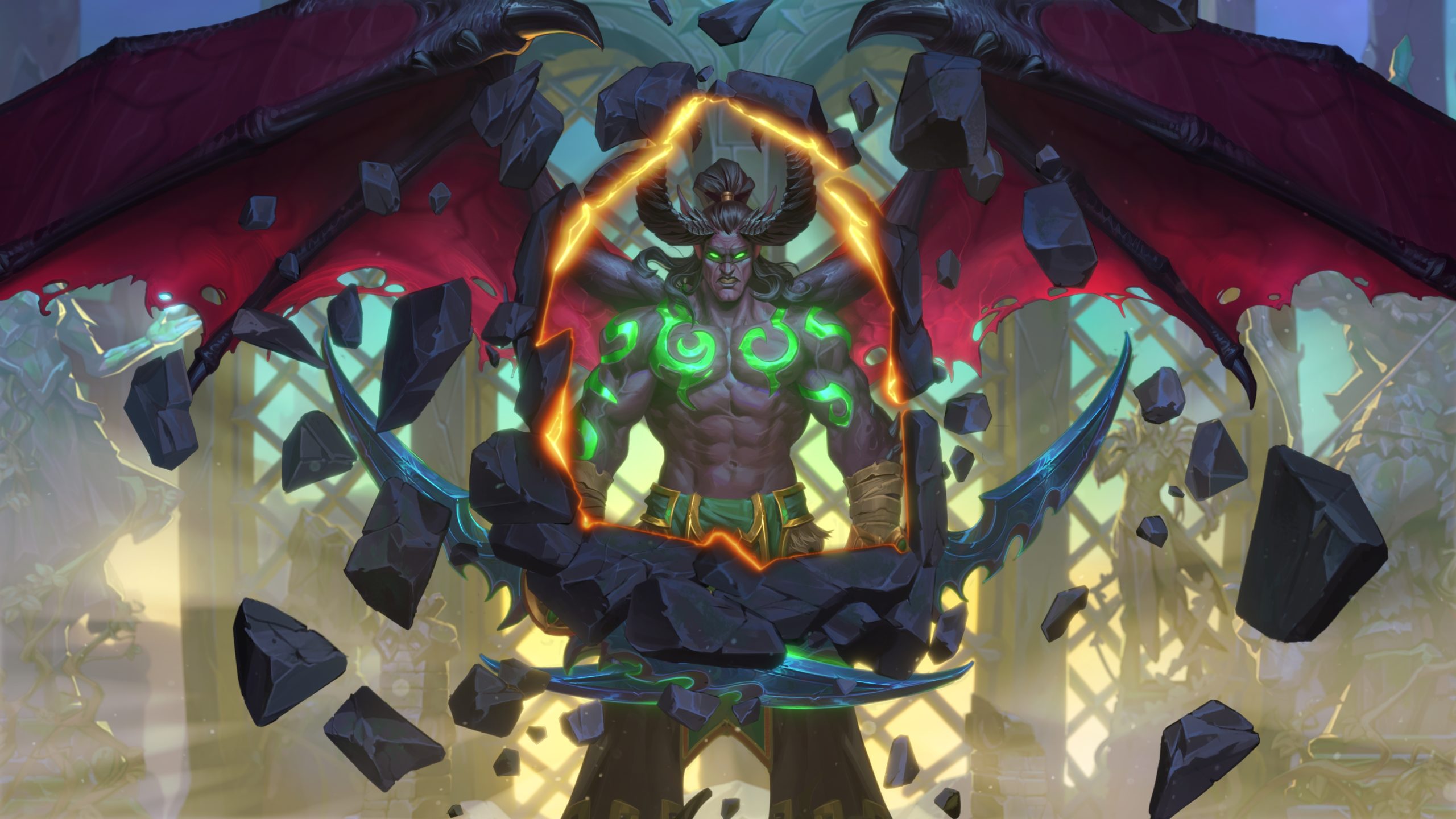 The new Hearthstone year kicks off with the debut of the Demon Hunter, the first entirely new class added since the game’s launch

Available for pre-purchase now with special bonuses, the upcoming Ashes of Outland™ expansion explores one of Azeroth’s most storied locales and introduces 135 fel-infused new cards

The Year of the Phoenix will bring monumental changes to Hearthstone, including a thorough overhaul of ranked play, updates for Battlegrounds, and more

IRVINE, Calif.–(BUSINESS WIRE)–The Year of the Phoenix will rise in Hearthstone® on April 7, bringing monumental changes to Blizzard’s smash-hit digital card game. This fiery new era will commence with the introduction of the Demon Hunter, the first all-new class to be added to Hearthstone since the game’s launch. All players will get the Demon Hunter class and corresponding Illidan Stormrage Hero free, as well as 30 of the class’s specially tailored cards—and even be able to dive right into the action with a pre-built decklist using those cards. Coinciding with this grand debut is Ashes of Outland™, the first expansion in the Year of the Phoenix, which takes players beyond the Dark Portal and into the war-torn realm that was the setting for 2007’s World of Warcraft®: The Burning Crusade®. Additionally, Hearthstone will see a staggering array of features, updates, and in-game events—including substantial additions to the Battlegrounds game mode.

“We’re excited to kick off the Year of the Phoenix by introducing Hearthstone’s first all-new class together with the epic Ashes of Outland expansion,” said J. Allen Brack, president of Blizzard Entertainment. “The Demon Hunter is iconic to Warcraft®, and the class is a natural fit for Hearthstone. When you look at everything coming to the game in April, and everything we have planned for 2020—this is going to be the best year yet for Hearthstone players.”

The Demon Hunter and the new Demon Hunter class cards will enter Hearthstone on April 7 alongside the launch of Ashes of Outland, the first expansion of the year.

For more information on the Demon Hunter, visit the official blog.

Ashes of Outland takes Hearthstone beyond the Dark Portal into the shattered, war-torn realm that was the setting for 2007’s World of Warcraft: The Burning Crusade. Illidan Stormrage, the original Demon Hunter, has proclaimed himself Lord of Outland. Along with the Illidari—Illidan’s elite cabal of fellow Demon Hunters and their motley thralls and allies—he serves as the last bastion of hope against the dreaded Rusted Legion.

Visit the official blog for more details on Ashes of Outland.

Year of the Phoenix Updates

The Year of the Phoenix will be an explosive one for Hearthstone, with a vast roadmap of expansions, features, updates, and in-game events in the works. Here’s a peek at what players can expect:

For more information on everything coming to Hearthstone in the Year of the Phoenix, please visit https://blizzard.gamespress.com/Hearthstone.

With more than 100 million players worldwide, Hearthstone is Blizzard Entertainment’s internationally acclaimed, free-to-play digital card game designed for novice and veteran card-slingers alike. Players can choose from 10 powerful hero classes and customize their decks with minions, spells, and weapons based on the unique fantasy of the Warcraft® universe. Featuring a variety of game modes ranging from epic head-to-head duels to story-driven Solo Adventures, Hearthstone offers a vibrant and rewarding experience stacked with strategy, personality, and fun. Hearthstone is available globally for Windows and Mac PCs; Windows, iOS, and Android tablets; and iOS, and Android mobile phones.

Best known for blockbuster hits including World of Warcraft®, Hearthstone, Overwatch®, the Warcraft, StarCraft®, and Diablo® franchises, and the multifranchise Heroes of the Storm®, Blizzard Entertainment, Inc. (www.blizzard.com), a division of Activision Blizzard (NASDAQ: ATVI), is a premier developer and publisher of entertainment software renowned for creating some of the industry’s most critically acclaimed games. Blizzard Entertainment’s track record includes twenty-two #1 games** and numerous Game of the Year awards. The company’s online gaming service, Battle.net®, is one of the largest online-gaming services in the world, with millions of active players.

*Tavern Pass perks are unlocked for a limited time and reset at the end of the Ashes of Outland expansion cycle. For more information about Battlegrounds bonuses and the new Tavern Pass, please visit the official blog.

**Sales and/or downloads, based on internal company records and reports from key distributors.

EA and FIFA Announce the EA SPORTS FIFA 20 Stay and Play Cup to Bring the Football Community Together Through “Stay Home, Play Together.”

Shinsekai Into the Depths – Recensione

Zynga to Present at the Morgan Stanley Technology, Media & Telecom...

Pick a Side and Scramble Your Starfighters in Star Wars™: Starfighter...