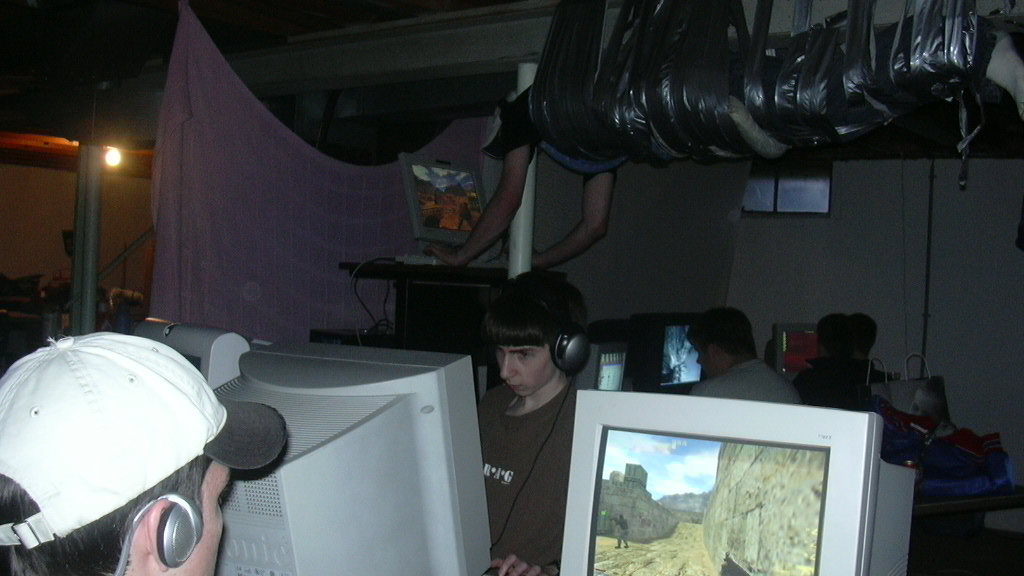 The Internet has always been a forge of photographs, at least bizarre, if not worse.

One of the most famous photos in the history of online gaming this is surely the one above, where a person was literally attached to the ceiling with plenty of adhesive tape (who knows if it was fine, as well as the good Rocket Raccon), while his dangling arms reach the keys of a Dell mechanical keyboard.

Obviously the metropolitan legends on the flame issue everywhere and every time, with people who swear on their honor that he was present or even the author of the photo.

Many have been contacted for a veritable version of the story, but most simply have not responded or did not provide evidence to prove that what they say corresponds to reality.

But apparently the search was not in vain: a group of players in a small town (Mason - Michigan) seems to be responsible for this piece of history.

The guys in question were usually organized LAN Party (and here is the nostalgic music from scenes, with many of us, especially the elders, who sigh "Ah, what good times") in which era ruled sovereign Counter Strike.

Through Reddit and email exchange, kids of Kotaku, they are committed to finding this group and contacting them to receive confirmations and further tests.

Brian Schaeffer, one of the guys in this group, said the story behind this photo was never a state secret, but most of the fun was to see what the people of the web could invent about it.

Apparently the group was usually encountered in the homes available and, sometimes, even in a tire store, dragging behind computers to play.

It was the summer of 2002 (though our Fraws swears to remember this photo well before) and at that time, Counter Strike was the game to play. There were also Command & Conquer, Battlefield 1942 and Starcraft (thinking back, what a great year for video games), but anyway Counter Strike it was always the first choice because it spun on computers of all those without any problems.

The name of "Gamer Duct Taped"Has been revealed and is Drew Purvis. The story is pretty simple: the LAN was already super crowded, there were already a dozen players playing at least 3 or 4 different games.

Tyler, one of the participants, looks around and exclaims:

"I think you can stick someone on that steel beam with tape."

No sooner said than done! The guys gather everything they need to do the work, they go to buy a sticker tape from a friend's discount and the tallest of them all, Brian, keeps Drew while others begin to stick to the ceiling.

But the photo that has been passed on to history is not the first attempt. In fact, after 10 minutes where it was pasted to the ceiling, the tape started digging the sides of Drew, who asked to step down and make changes to the initial project. At that point they added cushions and put it on and then someone had the brilliant idea of ​​stacking the tables to allow Drew to play with his computer.

It turns out that so the idea of ​​allowing him to play was born alone AFTER hang it on the ceiling (which makes the story much more fun).

Our "Gamer Duct Taped"He resisted two hours suspended in this way before being brought back to earth (apparently a cocoon of duct tape becomes very hot).

Brian, who fortunately had taken her camera from the photo lessons of that day, saved some shots to commemorate the moment. Drew posted photos on a gaming forum, immortalizing the event and getting into the gaming world forever.

At first, the guys tried to keep track of all the forums or sites where the photo would appear, but soon they became viral and could not keep up, discovering that once something is coming over the internet it is impossible to hide it in the future .

Every time the photo begins to recirculate for the web for i Mason guys it's like a small meeting.

Now some of the participants in the LANs have been separated, but some of them continue to cultivate the passion for gaming, sometimes physically, other times online, to play games like League of Legends.

Brian he said in one of the recent reunions that it is not the same as the Lan Party. Dragging the computers behind to get together now has become more difficult because they are all adults and no longer have the time they once had.

This photo remains the emblem of a past time when we met at our friends' home with our computers on the go (gaming laptops were a dream away) and kept their parents awake with the sound of mechanical keyboards ... the times change, as the great singing Bob Dylan.

Andrea Schietroma - October 23, 2020
xCloud is undoubtedly one of the strong points of the Xbox video game offer and seems destined to evolve over time, expanding its methods of ...
News

The controversy of Alex Hutchinson's tweets on the copyright of live ...

Matteo Runchi - October 23, 2020
It was predictable that Twitch's action against DMCA violations by streamers would cause mixed reactions. In addition to those that everyone ...