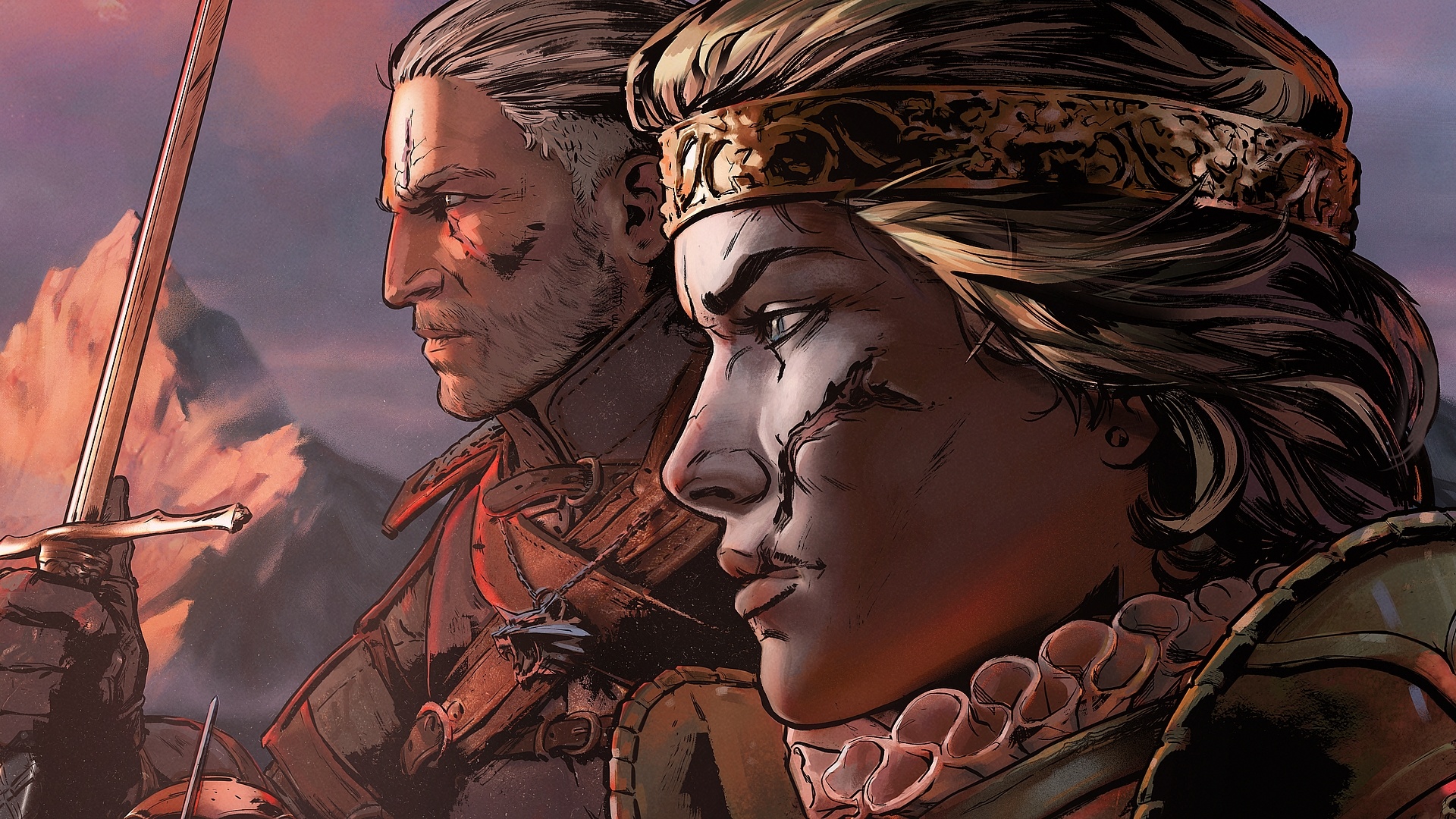 Thronebreaker: the Witcher Tales , a title that represents the long-awaited single player campaign of Gwent, which over time became a real game in itself, has finally arrived on PC, with just a year of delay. Despite being presented as an independent and proposed chapter at a cost not indifferent (about 30 euro on Good Old Games), it was equally feared that it was little more than a glorified tutorial for the Cd Projekt Red card game. The reality, as we can now touch, is quite different: Thronebreaker is in all respects a worthy spin-off of The Witcher saga, and the quality of the product, especially in the narration, is that with which Cdpr has spoiled us from when the first title in the 2007 came out. 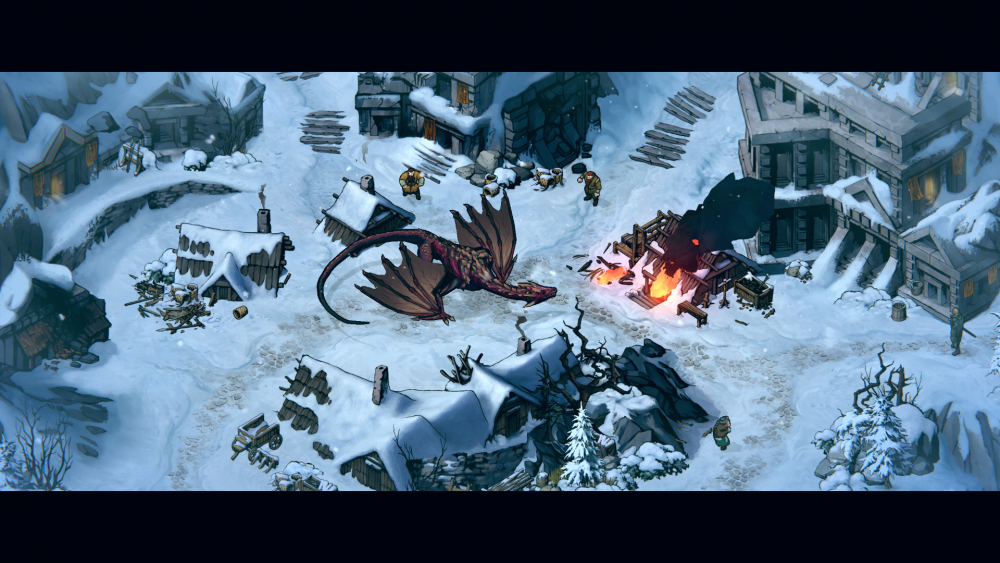 As already known, Thronebreaker has a role-playing and exploration component and a combat system essentially taken over by Gwent, the mini-game already present in Wild Hunt in its embryonic stage, that is a card game with mechanics that are certainly unique in their kind. The thread that unites these two aspects is the excellent narrative of the title, characterized by the fact that the decisions made have repercussions both on the world and on the cards at our disposal. In the game we impersonate Meve, Queen of Lyria and Rivia, a skilled political and fierce fighter struggling with enemies inside and outside his kingdom, and surrounded by subordinates whose loyalty is anything but unquestioned. The journey of our protagonist begins with a tutorial that introduces exploration, the collection of different resources and their use to enhance our army, the interaction with the NPCs we meet and of course the fighting. 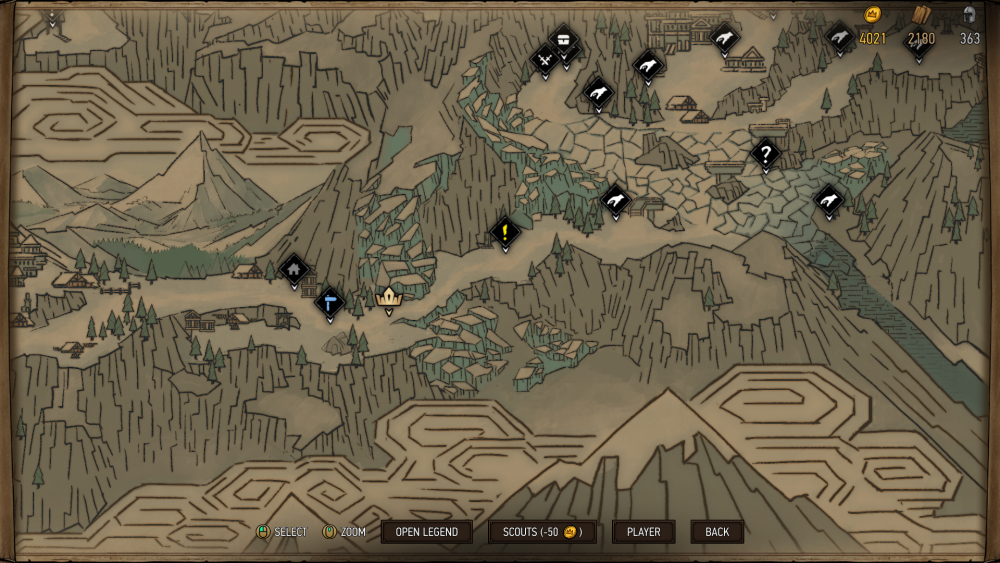 Our forces on the map are represented simply by a 3D model of the queen, as seen in Heroes of Might and Magic or other isometric strategy games, which can move freely by interacting with the various characters and points of interest we find, and when they meet. enemies on the field transition to the Gwent board. In moments of respite we can visit our camp, focal point for the organization of an army, and there to invest gold, timber and men gathered along the road to improve our arsenal, which is strengthening the soldiers already at our disposal, recruiting new ones, or building buildings that improve our efficiency in battle. Here is also where Meve can converse with fellow recruits, consult progress made on the current map and customize the deck that we use in combat, which must also contain minimum 25 cards and can not exceed a cost in supplies determined by the difficulty of the game and incrementable with some upgrades. 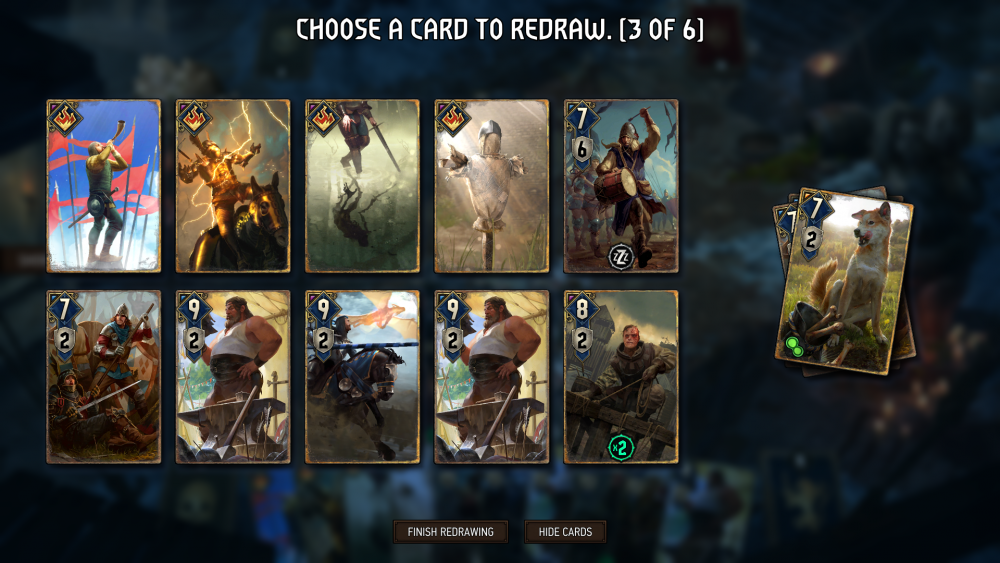 The fights are dealt with the Gwent system: ten cards are drawn at the start of the first round and three at the next, and one is played per turn, placing it on one of two rows. The goal is to get more points of the opponent in two rounds out of three, taking advantage of the particular value and the particular skills of the cards, but also the help of Meve, who can intervene during the fight, as the leader of the our enemies. If a round seems lost to us it is possible to pass, to avoid wasting precious resources, trying to make up for the next one. During the game we meet very different enemies and this forces us to review our tactics, albeit well established: fighting a regular army is very different from facing a mountain troll. In addition some clashes propose special rules or objectives, such as having to destroy a castle during a siege or block the escape of some bandits who have hostages with them, forcing us to adapt our strategy to the situation. In the event of a defeat it is always possible to return to the previous checkpoint and reorganize his deck, thus preparing himself adequately for the danger. The most successful part is undoubtedly that of gods puzzle: fun puzzles even in their simplest instances, which can require considerable effort in some cases, often asking us to exploit units and mechanics that otherwise we would not have considered. The standard fights could get tired soon, especially if you do not experiment with deck building, but this simple addition makes the gaming experience much more enjoyable. 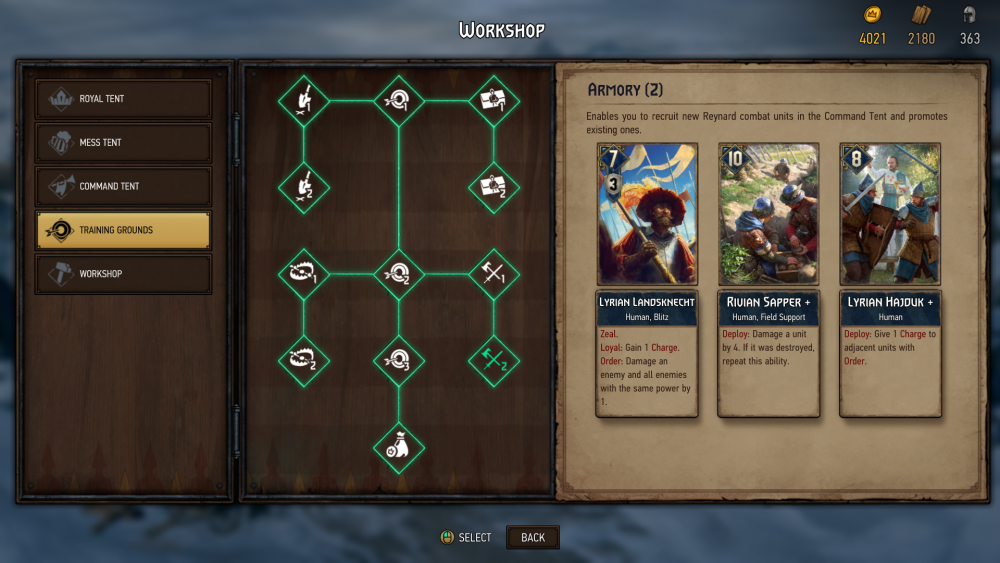 It is no surprise that the majority of players are looking for a well-written story in Cd Projekt's products, with interesting dialogues and unique characters that leave their mark. Thronebreaker does not disappoint in this respect: the plot is compelling, the dialogues are excellent and the protagonists are incredibly characterized. Meve in primis, is a prominent figure of the highest level, and his allies (and enemies) are not far behind. As always happens in the world of The Witcher, delicate issues are addressed, such as war, racism and xenophobia, never in a banal way and without the introduction of characters who embody absolute evil: men, women, dwarves and elves act in a way that is consistent with the situation and their own interests, without stereotypes. Great return also for the system of decisions and consequences, which in this case are taken by a ruler and therefore radically shape the entire game world and not just personal experience, so much so that the developers have promised twenty and more finals based on our choices. Our actions can make us get the support of allies or prevent others, thus changing the cards at our disposal and indirectly the outcome of different main and secondary missions. Moreover, there are repercussions on the morale of the army, which influence the value of the positive and negative cards by one point, quite relevant if played at high difficulty, but still circumvented. 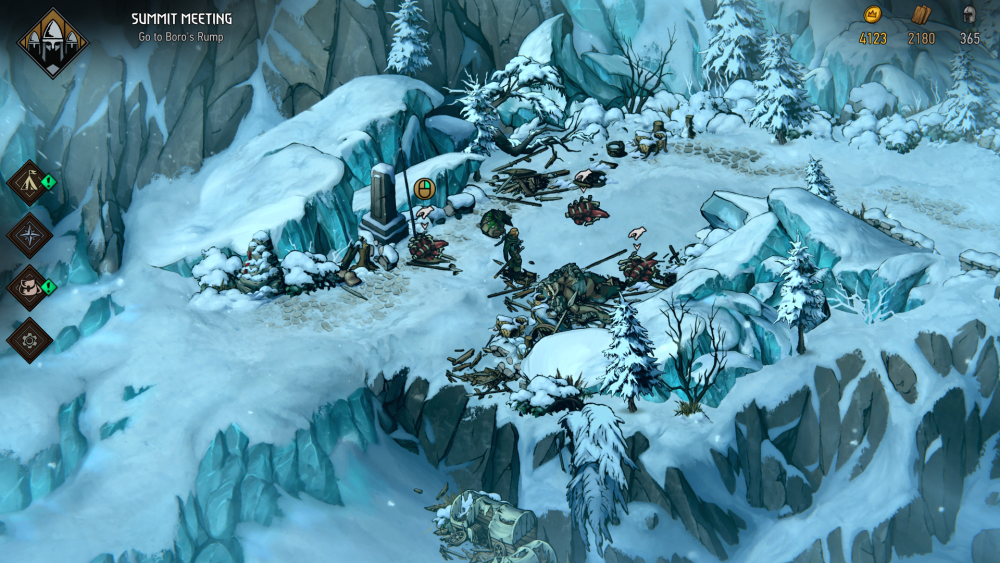 Let's move on to the graphics: the presentation of the game is amazing, after the summits reached with Wild Hunt the developers have decided to try their hand with a simple isometric visual and almost carto-naval textures, though preserving the tones and colors that characterize this world and thus maintaining the style that made the Witcher iconic. The result is aesthetically pleasing with truly magnificent settings fantastic artwork of the cards, largely original and never seen before. . Excellent also the use of ambient lights and the alternation day night to which we can assist on different maps. During the dialogues the models of the characters have a comics appearance already used previously by the studio, also very successful, and with only flaw the animation of the mouth, which appears unrealistic and with lipiale not entirely synchronous in some scenes. The use of a constant color palette for objects with which it is possible to interact is of great help for those who do not want to constantly consult the map looking for collectables or resources. If the appearance of the game is noteworthy the audio industry is certainly not less, and nobody expected anything different: the quality of dubbing is stellar, and the music continues to be light years ahead of what competition has to offer in this field. It is worth mentioning that although Italian texts and subtitles are available, the voices are in English only. Some may legitimately resent this choice, but given the amount of text present in the game it would have been difficult to recover the investment necessary for a complete localization. 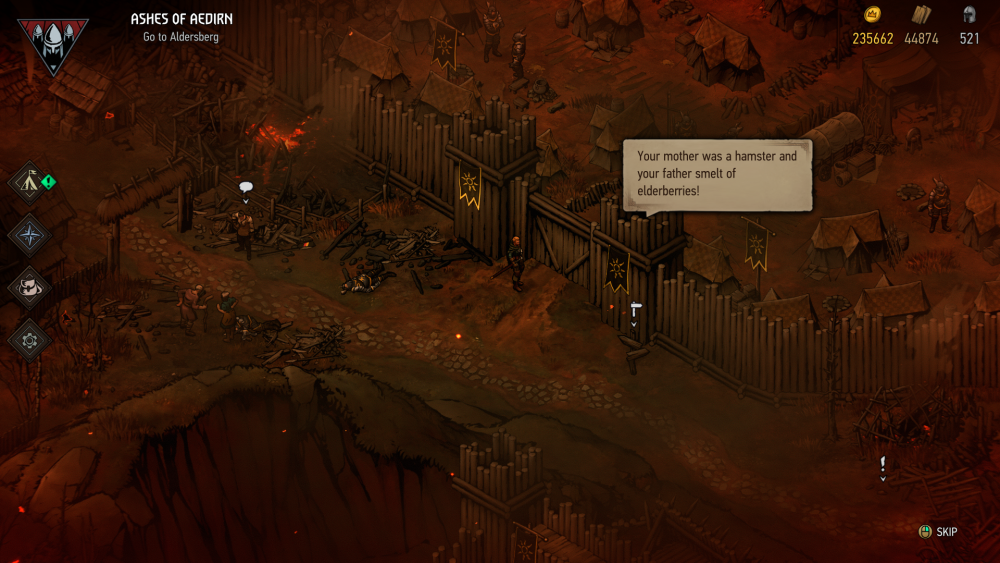 In conclusion, it is a game with attention to every detail and highly recommended to all fans of The Witcher saga, who probably have already bought and devoured it, but also to those who appreciate card games or simply a title with a really well written. Finally, the 23 cards, in standard and premium version, obtainable for Gwent online gaming, the first automatically and the second through hidden trunks for the gaming world. A much appreciated gift.