We Talk About Video Games
Home News Metro Exodus on Epic sells more than twice as much as Last Light ...

Deep Silve and epic Games have announced to GDC 2019, that the launch of Metro Exodus on ' Epic Store Games it was a real success, surpassing even the sales of Metro: Last Light su Steam going back to the distant 2013. In fact, so far, Metro Exodus has sold a number of copies equal to approximately 2 times and a half compared to Last Light. 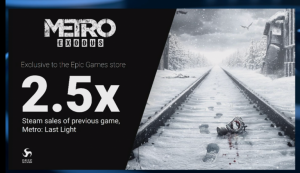 Simply put, exclusivity has borne fruit. It is obvious that, at present, we do not know how things would have gone on Steam, but despite this, such a large number of sales can only benefit the platform itself. There are obviously to remember the countless difficulties who served as a border to the store (boycott in primis) prelude to a launch, that of Metro: Exodus, full of pitfalls. But despite this, most PC players claim to be satisfied, which explains why several developers, as well as many publisher of the sector, have signed new exclusives with l 'Epic Store Games, for their future products.

Published the first teaser trailer and revealed the title of Star ...