Devil May Cry 5 has already sold more than 2 million of copies in just 2 settimane. No release official from Capcom in this regard, but rather a slide of the aforementioned data, exposed by Director of the game Hideaki Itsuno in that of the GDC 2019. The photographic leak is the work of the designer of Iron galaxy, Isaac Torres. 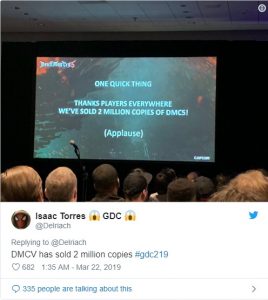 Devil May Cry 5 presents a highest number of players on Steam compared to remake di Resident Evil 2. These data, an indication of a real departure with flakes on PC. Numbers not so impressive though compared to others Triple A Capcom (like Monster Hunter for example), but nevertheless, this fifth chapter, aspires to become the title with the largest number of copies sold in the series. Comparing it in fact with Devil May Cry 4 (the best selling ever with 3 million copies in total) Devil May Cry 5 is the game of the series that was sold faster on the official release date. Please note that Devil May Cry 5 is available now for Pc, Ps4 e Xbox One. The first DLC (free as future ones) will be released on the first of April and introduce the infamous blood palace mode.

Square Enix may have suggested the arrival of a new game from ...