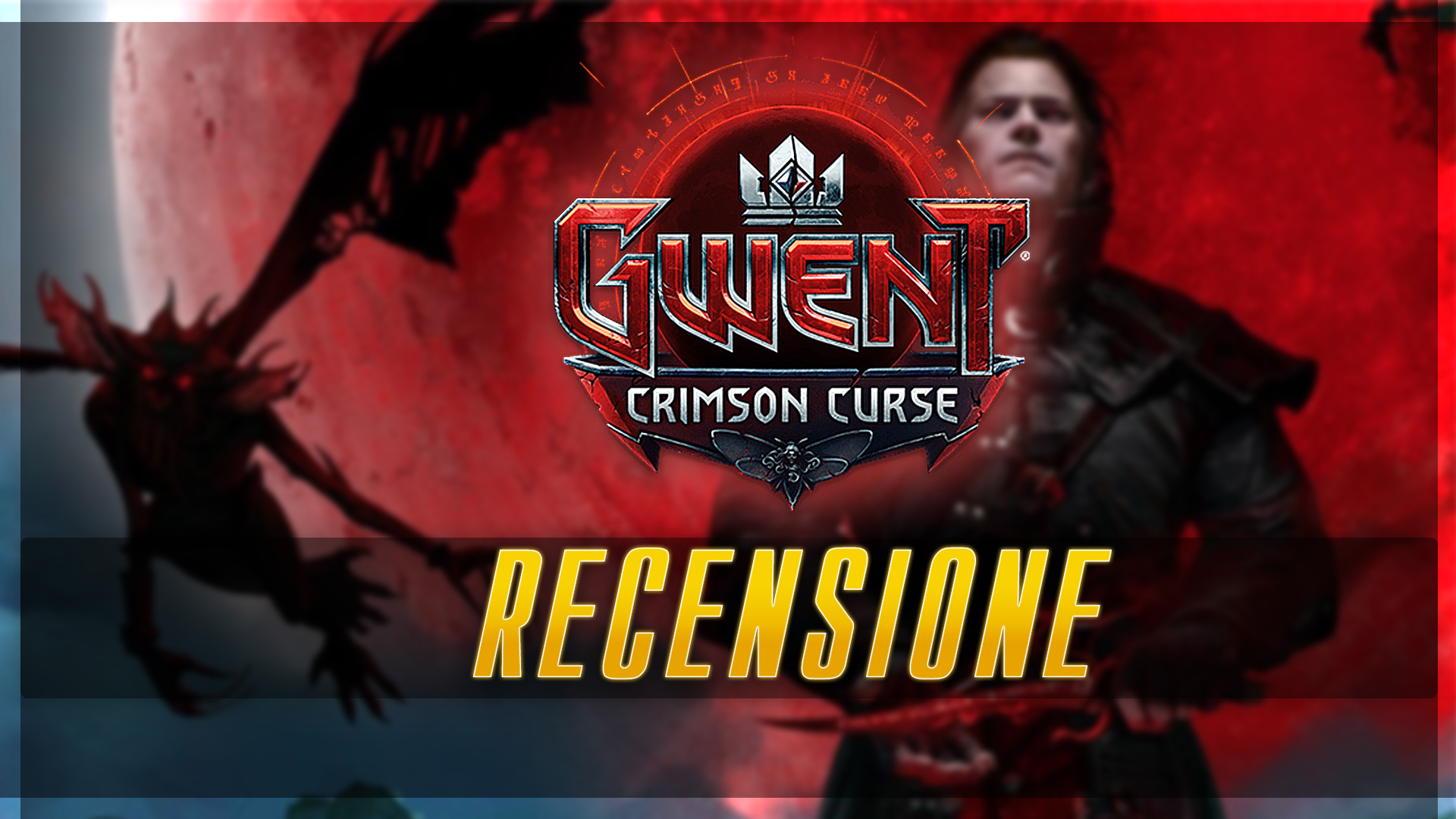 Four long years have passed since when GWENT he began as a minigame in the acclaimed The Witcher 3 Wild Hunt, and after pressing requests from fans in love it became a CCG in all respects. Hybrid between a card game and a turn-based strategy game, this title soon gained a dignity and a fanbase of its own, thanks also to the excellent Thronebreaker that gave us a single player campaign. The novelty that is keeping the players glued to the screens is Crimson Curse, the first multiplayer expansion of GWENT, which brings with it more than 100 new cards, for a total of more than 300. Important numbers. 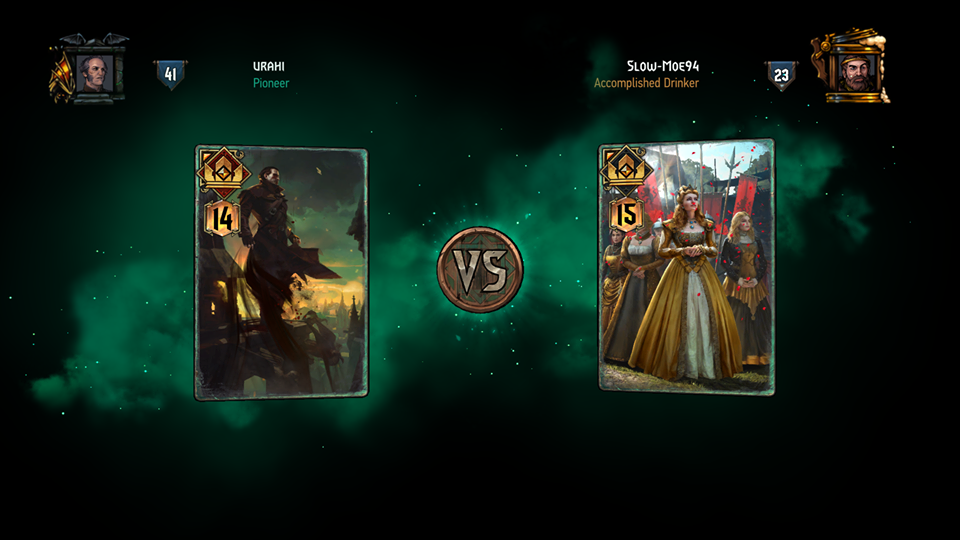 The reference to the blood in the title is evident, and is justified by the arrival of the much sought after vampires, among the most fascinating creatures of the fantasy universe, excluding sparkling versions. Crimson Curse is not limited to introducing the leeches of the night, but is based on Blood and Wine and proposes atmospheres and characters with great charm. Each faction received a highly featured package: Cintra joins the Northern Kingdoms, the duchy of Toussaint in Nilfgaard, dryads and treants join the Scoia'tael rebels, while in Skellige rises the terrible cult of Svalblod. One cannot remain indifferent to the mysterious dryads, but the abominable cultists of Svalblod, able to go berserk and turn into huge bears, they conquered my young heart. 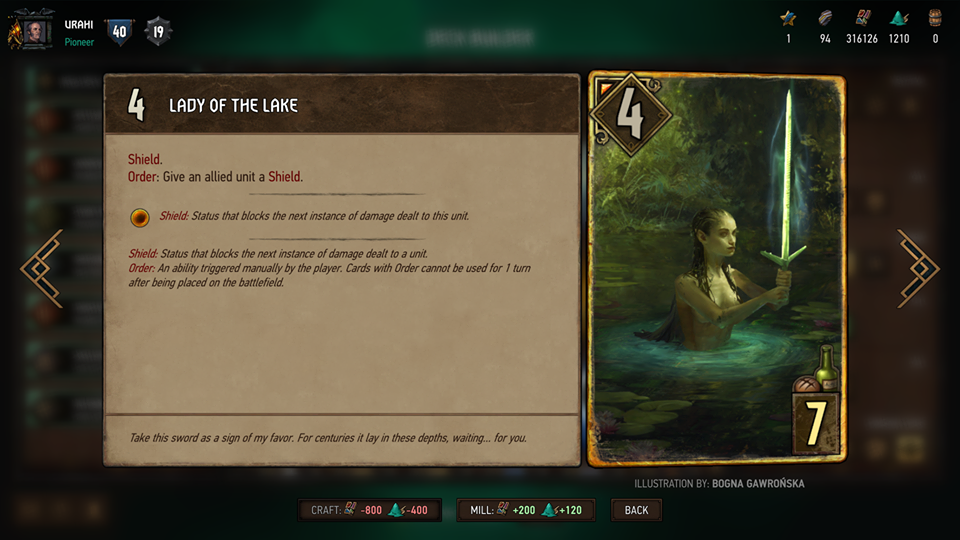 With the new cards, numerous mechanics and interactions have been introduced, some simple triggers, others more complex and multifaceted. He also makes his return "shield", A barrier that protects one unit from the next damage received, whatever its size, absent from the end of the closed beta and of which the veteran players definitely missed. The new leaders are also very interesting: first of all Dettlaff, the undisputed protagonist of this expansion, but also Anna Henrietta and the bloody half-bear god. They all have abilities that, in addition to adding new gameplay mechanics, go perfectly with the world of The Witcher. 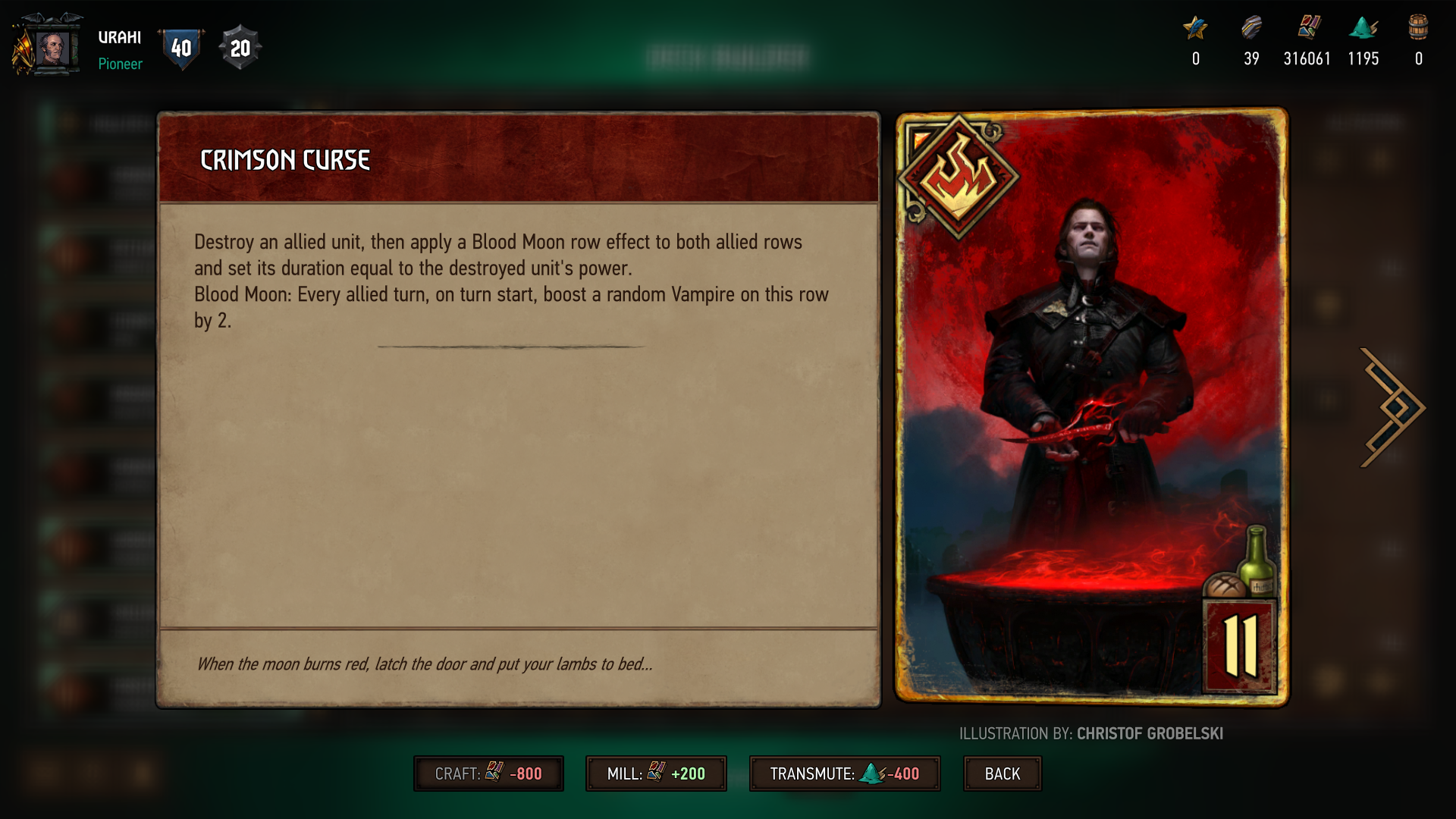 I would dedicate an entire treatise to dream about the beauty of GWENT's illustrations, and Crimson Curse would occupy several chapters. I designs are wonderful and the animated versions of the cards are often impressive. Despite the physiological presence of some less inspired illustration, it is impossible not to be fascinated by the unquestionable quality of the title's artistic direction, which has always been one of the spearheads of the game. An artbook would be a must.

The new contents were accompanied by a substantial patch, which solved some glitches and balanced the core set to make it compatible with the new expansion, in addition to dampen the strongest archetypes to encourage players to explore new possibilities of the vast world of the game. The approach to game design and balancing continues to be much more flexible and dynamic than most of the competition: the developers almost always show themselves receptive to complaints or suggestions from the community, often recreating the most problematic cards from scratch and modulating the most dominant. Not even on this occasion did they refute: the update responded to almost all the needs of the players, continuing to encourage a competitive environment (and not) as healthy as possible. 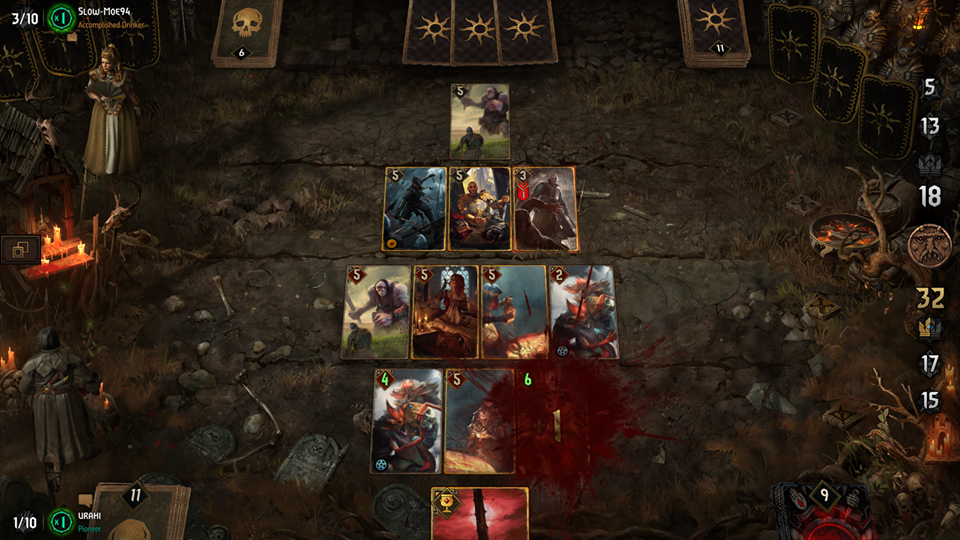 For those who, like me, have accumulated thousands of hours in this game it is practically essential to dive into this set too, but if you are still a beginner, wait a while before using the game's resources to add the cards that inspire you the most collection. There will certainly be some nerf in the coming days, as the power level of some cards seems a bit too high.

This expansion certainly marks a very important point in the history of GWENT, which in the past has had more than a few hesitations, and is the confirmation of how satisfied the development team is with the work done up to this point. My opinion, and hope, is that from this moment on, they feel able to handle even more content, perhaps on a regular basis. Despite some rare translation errors and a bit of filler, absolutely unavoidable given the amount of content, Crimson Curse is really a great addition for GWENT. Incredibly atmospheric, visually entrancing, with enjoyable mechanics that integrate perfectly with what was already present. Certainly some adjustment will be necessary, we are still a few days from the launch, but at this point the future of GWENT seems decidedly rosy. The game survived the saturation of the digital cardgame market and the ruthless competition of giants like MTG Arena and Hearthstone, earning a solid and stable base player, also thanks to the affection of the players for the The Witcher saga. 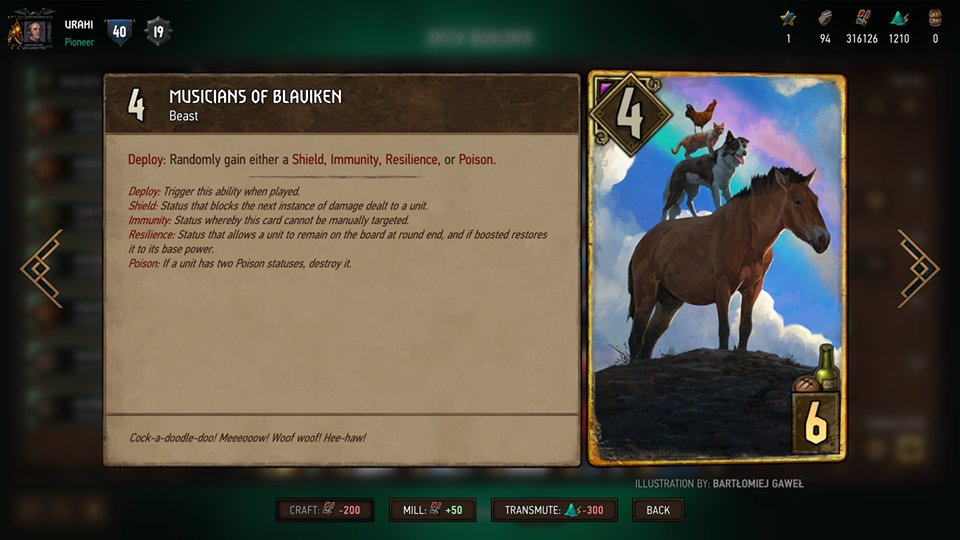 For those who already knew GWENT, Crimson Curse is a must, but even new players will be tempted by this magnificent expansion. I believe that at the moment it is quite complex for novices to approach the game, not only for the substantial addition of cards, but above all because the starter decks are not competitive enough. Furthermore the deck building is not easy to learn and the arena, a usually casual-friendly mode, is incredibly punitive with those unfamiliar with the game, starting with the draft. It remains one of the most generous free to play titles there is: practically the game floods you with resources of every kind even in case of continuous defeat. Nevertheless, the very first impact could discourage the novices. Hold on!

I invite fans of The Witcher or card games to try this title without delay, especially now that it has received this substantial addition of content. A lot can be achieved without spending anything, not just a merit today as today, but buying some packages (pardon, barrel), from the friendly troll Empørio will not make you regret your money. We get attached to GWENT, guaranteed.