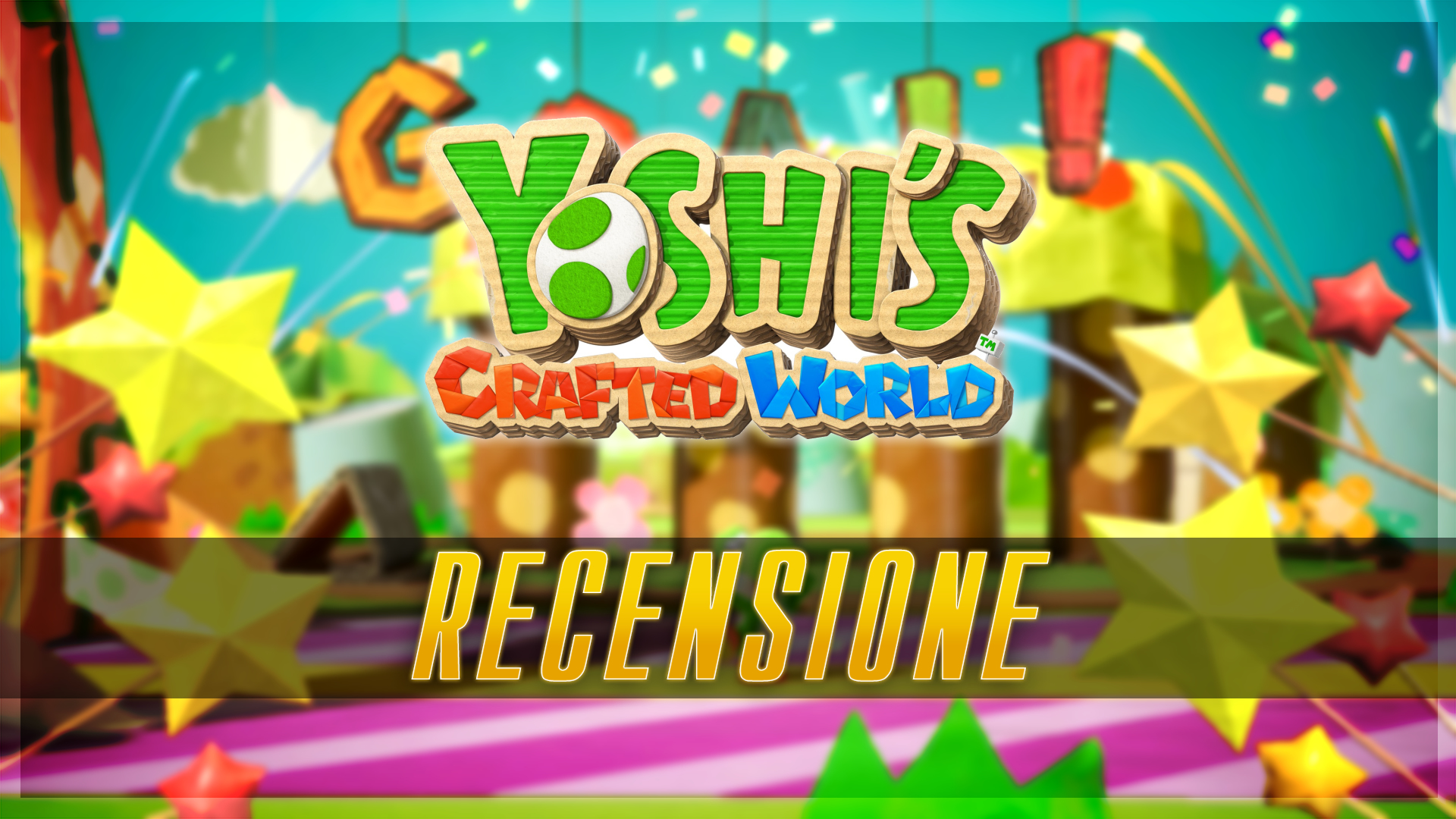 Every time I hear about Yoshi my mind takes me back to the distant 1998, when as a child I received a beautiful copy of Yoshi's Story, a title for Nintendo 64, as a gift. My first approach with the videogame dinosaur of the great N was born from there and, at the time I was fascinated by the graphic style and the incredible tenderness that Yoshi knew how to give, thanks to his perennially joyful character. The green dinosaur series is not one of the most popular in the Nintendo ranks, and many years of development have often passed between a chapter and another. Since Nintendo in the 2015 has entrusted the work to the Good-Feel studio, the same guys who took care of the title "Kirby and the Hero's Cloth", the adventures of the funny green reptile have started to take a different turn from the past, going from a two-dimensional graphic to a more modern, almost cartoon-like one. Yoshi's Crafted World he does not distance himself from this concept and offers us a whole new dimension, this time made up of some borrowed materials and objects used in everyday common life.

On the island of the dinosaurs it is a peaceful day and eight specimens of Yoshi are intent on celebrating the "Wish Sun.“, A serene stone figure capable of fulfilling the wishes of anyone who possesses it. Unfortunately for the Yoshi, in the archipelago there are two threats: Bowser Jr. and the magician Kamek, and both crave to steal the artifact. After a clumsy attempt by the latter, the team formed by the Yoshi in the confusion of the fight to defend the idol, it accidentally destroys it, ending up scattering the buds of which it was composed around the island. It will therefore be the task of the Yoshi recover them to try to save the world. Again. 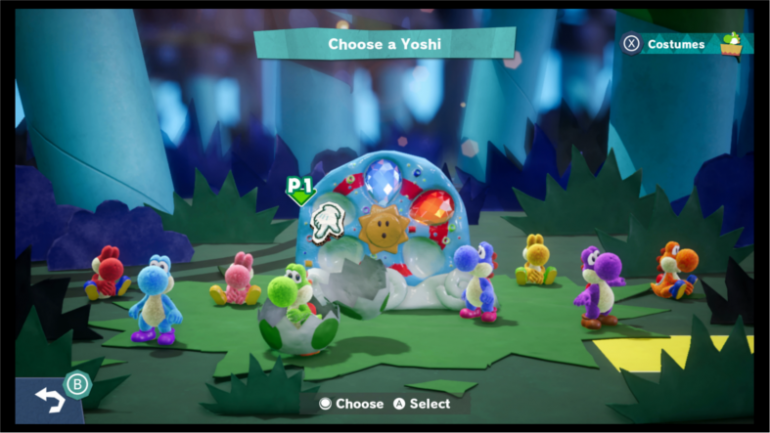 Once you start Yoshi Crafted World, the title allows you to select which one among the 8 specimens of the Yoshi (each with a different color) will accompany our adventures, in addition to being able to decide the difficulty with which to face the story. Challenge levels are present Standard o Relax, the latter designed primarily for a children's composted audience. Once this difficult choice is overcome, the player can finally face the adventure with the about 50 levels present in the video game. The game mechanics do not differ much from the previous chapters: as we have been used to seeing over the years, our cute hero can float in the air during a jump or gulp down any small-sized enemy, then turn it into eggs for being able to launch at any point of the stage thanks to a special viewfinder. In the levels it is possible to direct the dinosaur eggs towards some precise elements of the scenario, often well hidden, thus giving the player the opportunity to hit even enemies or hardbacks to unlock extra coins, useful for receiving any bonuses at the end of the stage. Our beloved dinosaur can also perform devastating thud on the ground, able to break some parts of the ground to reveal certain hidden bonuses in the game maps. 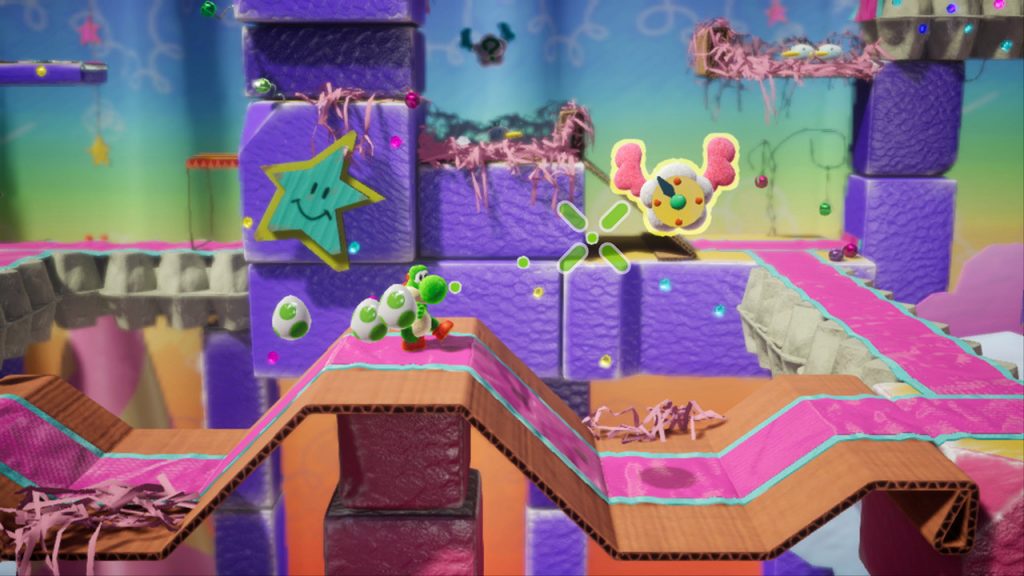 In the various levels present in the title it is possible to incur some "challenges", In which the player can find himself facing various goals: from recover certain wisely hidden objects within the various levels, up to check a Yoshi mecha able to pull very strong fists. questi are just two examples of many other proofs that the work offers us and where we can encounter. These experiences, often unexpected, tend to make the game even more engaging and fun, since they are detached, albeit partially, from a narrative thread that might seem apparently quite linear.

But the title is not limited only to the single player: the Cooperative mode allows you to share the game experience wherever you want with another player, thanks to the feature that allows you to separate Joy-con and create two mini Joypads. In the company of a friend search for collectibles can be easier, ma requires a certain collaboration on both sides. The fact remains that, in some situations, yes can create healthy competition in the best way to complete the three objectives that the game asks you to achieve. They consist in getting in every single world all the daisies, an adequate number of coins and the complete life bar at the end of the level. 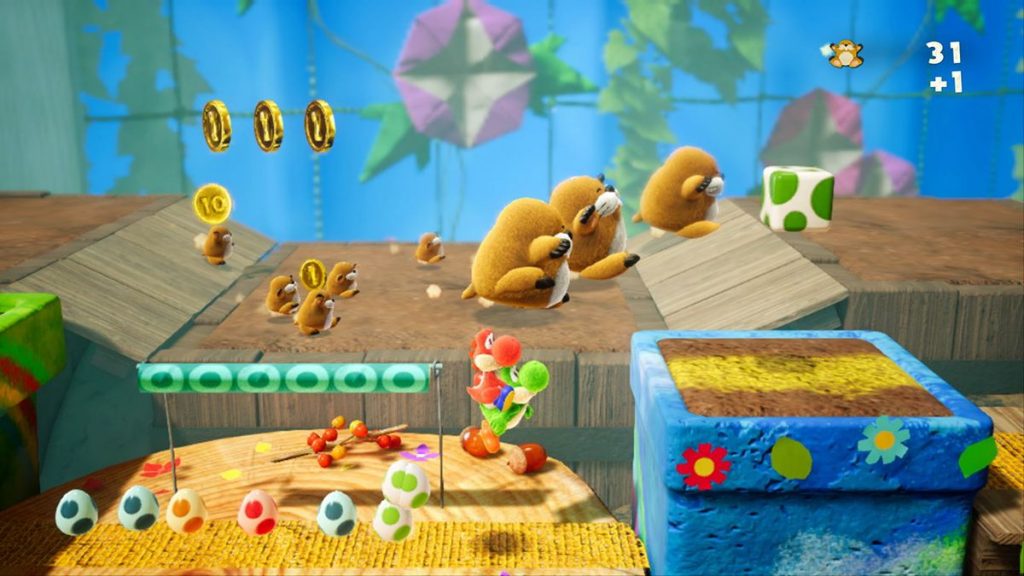 If you are wondering what daisies are for, the latter are fundamental for progressing in history as they can be used as a game currency to advance towards new worlds, all characterized by bright colors. The overall experience of the title, if you're a platformer, depends a lot on how you approach this videogame genre: if you are avid gamers and your goal is simply to quickly finish the worlds without devoting more space to the rest of the game, you can finish the work in about five hours. However, paradoxically, the best experience happens right after the story is finished: the title offers great ideas to be replayed and completed at 100%, thanks to the challenges mentioned above, which fortunately make the game even more long-lived and fun. Collecting all the daisies, managing to complete the title in full, is indeed an arduous undertaking. 100 gold coins and 20 red coins must also be collected in each individual stage, not to mention having to attempt to finish the levels with the maximum of life to get the deserved prize of extra daisies. We therefore advise players to be very patient, since the appearance of the tenderness of the worlds actually hides unexpected pitfalls, which could make the life of the completists somewhat harsh.

Sometimes in some stages it is also possible to play again in an unprecedented specular mode, in which the player must attempt to reach the finish line in the shortest possible time, saving at the same time the very tender Poochi puppies. In conclusion, Yoshi's Crafted World is a hymn to lovers of the Yoshi series. It has as one of its greatest strengths a huge factor of replayability, thanks not only to the already mentioned challenges, but also to some secondary missions based mainly on the observation of some objects present in the individual levels.

Piermatteo Bruno - July 8 2020
In most video games - starting from RPGs to Gatcha in recent years - the concept of farming (or grinding) is ...