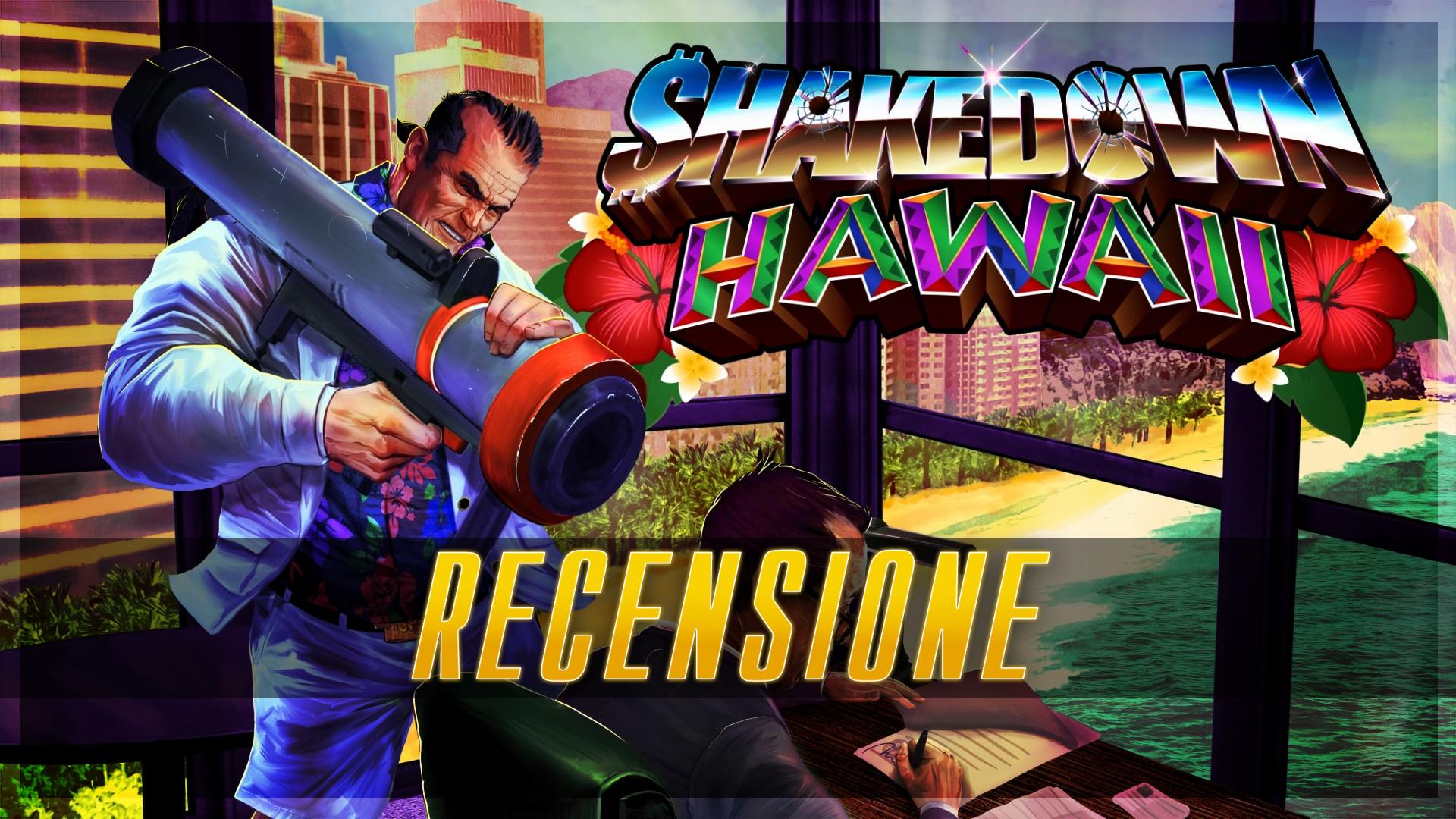 Want to find out how it feels to run a bankrupt company? In Shakedown Hawaii, you can live it. To do this, however, I immediately warn you, you find yourself having to get your hands dirty. Obviously in order to survive you have to plan a series of projects using the money coming from some poor shopkeepers, who in exchange for your protection give up their shops without too many problems, facilitating the conquest of the business of the entire city. Who needs scruples?

Developed by Vblank Entertainment, the studio behind Retro City Rampage, Shakedown Hawaii is a new project that takes inspiration from the previously mentioned title. The game puts you in the role of a mysterious protagonist, an egocentric old mafioso at the head of a company on the verge of bankruptcy, also because of the (often wrong) advice of some characters with a dubious appearance and not an easy character. The main objective of the video game is to try to conquer all the activities of the city, thus trying to improve the precarious economic situation of the company in. Wrapped in an aesthetic at 16 bit, with an all-round arcade touch, Shakedown Hawaii is a story of "business" that targets (with a discreet irony) also some current themes related to the videogame world, like virtual reality, and energy drinks for professional gamers.

Shakedown Hawaii begins with an interesting cue: the CEO of our mysterious company finds himself entangled in serious financial problems. Being the situation decidedly critical, our protagonist must find a solution as soon as possible to solve its problems and avoid bankruptcy. To make money easily, however, he is forced to collaborate with shady characters who (s) fortunately help him in spite of a winding path with various unexpected events.

During the first hours of the game, following the main course of the story, some can be unlocked missions to be undertaken. Many of these are secondary and allow some new outlets, such as access to new stores in the city, which allow you to customize the pixelated avatar as you wish (with excellent results, by the way!) or to acquire new properties that will then be useful to improve the economic situation of the protagonist. However, to absorb companies or simple shops, it is necessary to apply methods not exactly orthodox from the mafia style. Want an example? Store owners obviously don't let you conquer their businesses easily and without resistance. So what method do you think can help you achieve your goal? But it is obvious: to terrorize them by destroying all that is inside the business, perhaps even frightening the poor customers within them, by participating first in other subquests that the title imposes on you. If you get past the missions, the owners are convinced to "give up" their businesses under your protective wing, thus becoming an integral part of your company. The problem is that these methods are repeated over and over again and this can cause the player a sense of boredom. However, the more activities you get, the bigger your daily salary will be. Money is always money.

The history of Shakedown Hawaii is really hectic and sometimes it can be a bit annoying due to the excessive sense of repetition. The visual that will be presented to us in the title is isometric: I suppose that this choice was made by the developers to try to apologize (albeit vaguely) the stories found in the games of the arcade era, both good and bad. This open micro-world also offers side activities that could be fun to complete, like some specific extra challenges that you find marked on the game map. The main missions of the title are often short and easy to complete. Every time you finish one, you promptly receive a call from one of your henchmen with a new suggestion about activities to buy or some particular job opportunities. Within a few seconds, after short video sessions, a new marker appears on your game map and the usual "turnover" begins again. In some levels, you are presented with a new type of store or property to be acquired and this happens on time even when you don't have enough money to do it: you need to continue the story and enrich our finances to be able to expand.

But not all evils come to harm: Shakedown Hawaii simulates in some respects the very first chapter of GTA: the view from above and the freedom to be able to do what you want around the city he remembers several times some of the mechanics of the previously mentioned title. The player, if he does not want to follow the main course of the story, can be free to really do everything he wants: from indulging in killing unsuspecting passers by using creative methods (all quite bizarre, given also the pixellated graphics) thanks to a vast repertoire of weapons present in the inventory, which can be purchased in special stores or found at certain points on the map, following the trend of secondary missions to increase profits. Every poor victim gives money to our protagonist, but be careful to create too many scuffles around the city: the police are on their heels. And it can kill you or at least put the sticks in the wheels.

Creating chaos around raises the score obtained, but the latter, unfortunately, is effectively useless, given that it does not provide any bonus for missions or variations in history. A real shame, given that this element could have been exploited and used to unlock unpublished objects. But there is not much to do, unfortunately. If you want to play a short game session, there is also the possibility to choose arcade challenges directly from the main menu, in addition to being able to dedicate yourself to free roaming. 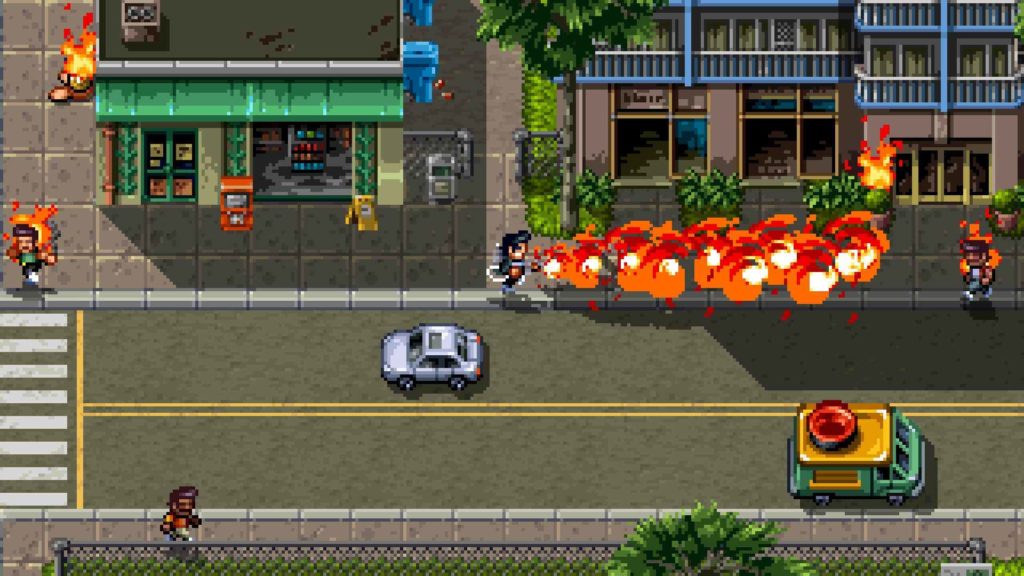 Shakedown Hawaii is a title that lives in the shadow of its predecessor: Retro City Rampage. Unfortunately, the main story leads the player to carry out missions that are repetitive in the long run or give the feeling of something already seen. However, there are also some interesting hints, stained by some shades of black humor. Another problem could be in the linguistic pitfall: the video game, in fact, does not have Italian as one of the selectable languages and the adventure is therefore entirely available only in English. Overall, it is an experience that I would recommend only for those who want to devote themselves from time to time to short game sessions, to identify themselves with an unscrupulous criminal and be thoughtless.

The Legend of Zelda: Breath of the Wild 2, the Spanish dubbing is over