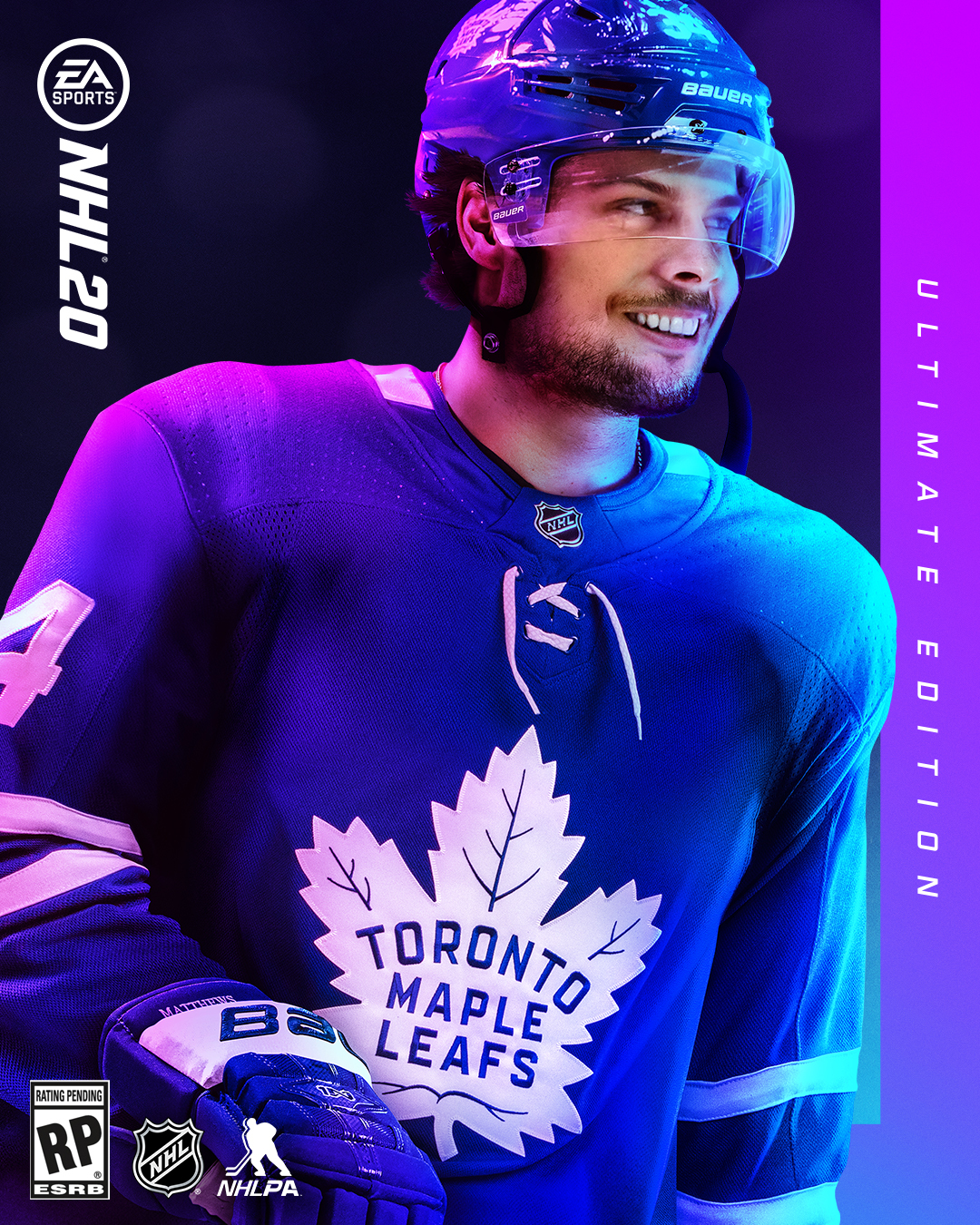 “Growing up I always admired all the players who got the cover of the game. "Auston Matthews of the Toronto Maple Leafs." "I can't wait to fire up NHL 20 in the locker room and play against my teammates."

NHL 20 Also introduces an all-new competitive way to play ONES and threes called Eliminator, creating a winner-take-all competition inspired by battle royale. ONES Eliminator pits 81 players against each other in a survival tournament bracket en route to crowning the ultimate winner. Players can also squad up with friends in THREES Eliminator in an attempt to win back to back rounds against increasingly competitive opponents.

Continuing to deliver a fresh feel to the franchise, a revamped broadcast package delivers new play-by-play and color commentary to NHL 20, paired with overhauled scoreboards, overlays and motion graphics, all built to put players in the center of the game's biggest moments. New to NHL 20, Play Of The Game brings memorable plays to life through highlights designed to put top moments on both your team and opponents.

Fan-favorite game modes Hockey Ultimate Team ™ and NHL ONES return with exciting new options and updates, including the ability to play ONES via local multiplayer with class-based NHL stars, creating the opportunity to challenge friends to a 1v1v1 battle at any moment. Hockey Ultimate Team introduces a new way to play in Squad Battles, the highly acclaimed mode from EA SPORTS FIFA that allows players to compete and earn big rewards in offline battles. New opponents are refreshed every day, including weekly Featured squads assembled by NHL players, hot musical artists, hockey influencers, and superstar athletes from other major sports. Squad Battles introduces a brand new way to take on the best teams assembled by the biggest names in sports and entertainment. Ultimate Team Hockey also welcomes new players to play hockey Icons, bringing the total number of collectible and playable icons to over 400.

After its introduction last year, the World of CHEL continues to evolve with CHEL Challenges, in-game events across all fans favored modes that unlock unique customization rewards, character XP and more are introduced in NHL 20. World of CHEL now offers over 2,000 unique customization items to craft your look - from gear and equipment to lifestyle apparel from hockey's biggest brands. Additionally, four new outdoor locations bring the game to never-before-seen ponds in the remote wilderness and city landmarks inspired by iconic locations.

NHL 20 is available on September 13, 2019 for Xbox One and PlayStation® 4. Be the first to experience the new game in September, 10, 2019 when you pre-order * the NHL 20 Deluxe Edition NHL 20 Ultimate Edition. EA Access ** members can experience the game first during the Play First Trial starting on September 5, receive 2019% discount when purchasing the full game. For more information on EA SPORTS NHL, visit the website at www.easports.com/NHL.

* CONDITIONS & RESTRICTIONS APPLY. IF IT'S https://www.easports.com/nhl/game-and-offer-disclaimers FOR DETAILS.

The National Hockey League (NHL®), founded in 1917, consists of 31 Member Clubs and proudly welcomes its 32nd franchise, based in Seattle, for the 2021-22 season. Each team roster reflects the League's international makeup with players from more than 20 countries represented, the Stanley Cup®. Every year, the NHL entertains more than 670 million fans in-arena and through its partners on national television and radio; more than 151 million followers - league, team and player accounts combined - across Facebook, Twitter, Instagram, Snapchat and YouTube; and more than 100 million fans online at NHL.com. The League broadcasts games more than 160 countries and territories through its rightsholders including NBC / NBCSN and the NHL Network in the US, Sportsnet and TVA in Canada, Viasat in the Nordic Region and CCTV and Tencent in China. The NHL reaches fans worldwide with games available online in every country including via its live and on-demand streaming service NHL.TV ™. Fans are engaged across the League's digital assets on mobile devices via the free NHL® App; across nine social media platforms; on SiriusXM NHL Network Radio; and on NHL.com, available in eight languages ​​and featuring leading team members as well as every regular-season and playoff game score box back to the League's inception, powered by SAP. The NHL is committed to building healthy and vibrant communities through the sport of hockey by increasing youth participation and engagement; fostering positive family experiences; promoting inclusion, positive culture and leadership; and supporting sustainable community impact.

NHL and the NHL Shield are registered trademarks and NHL Awards name and logo are trademarks of the National Hockey League. NHL and NHL team marks the property of the NHL and its teams. All Rights Reserved.

EA SPORTS ™ NHL® 20 is an Officially Licensed Product of the NHLPA. NHLPA, National Hockey League Players' Association and the NHLPA logo are trademarks of the NHLPA. © NHLPA. All Rights Reserved.

Andrea Schietroma - April 19 2021
The PS3 and PSVITA stores will remain open and will not close their doors this year, as originally planned. To officially communicate Sony's turnaround ...
News

Yoko Taro is working on a digital-only game ...

Di Sarno Raffaele - April 19 2021
In the past few hours, during the first official live stream dedicated to NieR Replicant ver.1.22474487139, the producer of the game Yosuke Saito announced that Yoko Taro is ...

Be Faster With the All-New Razer Blade Stealth 13