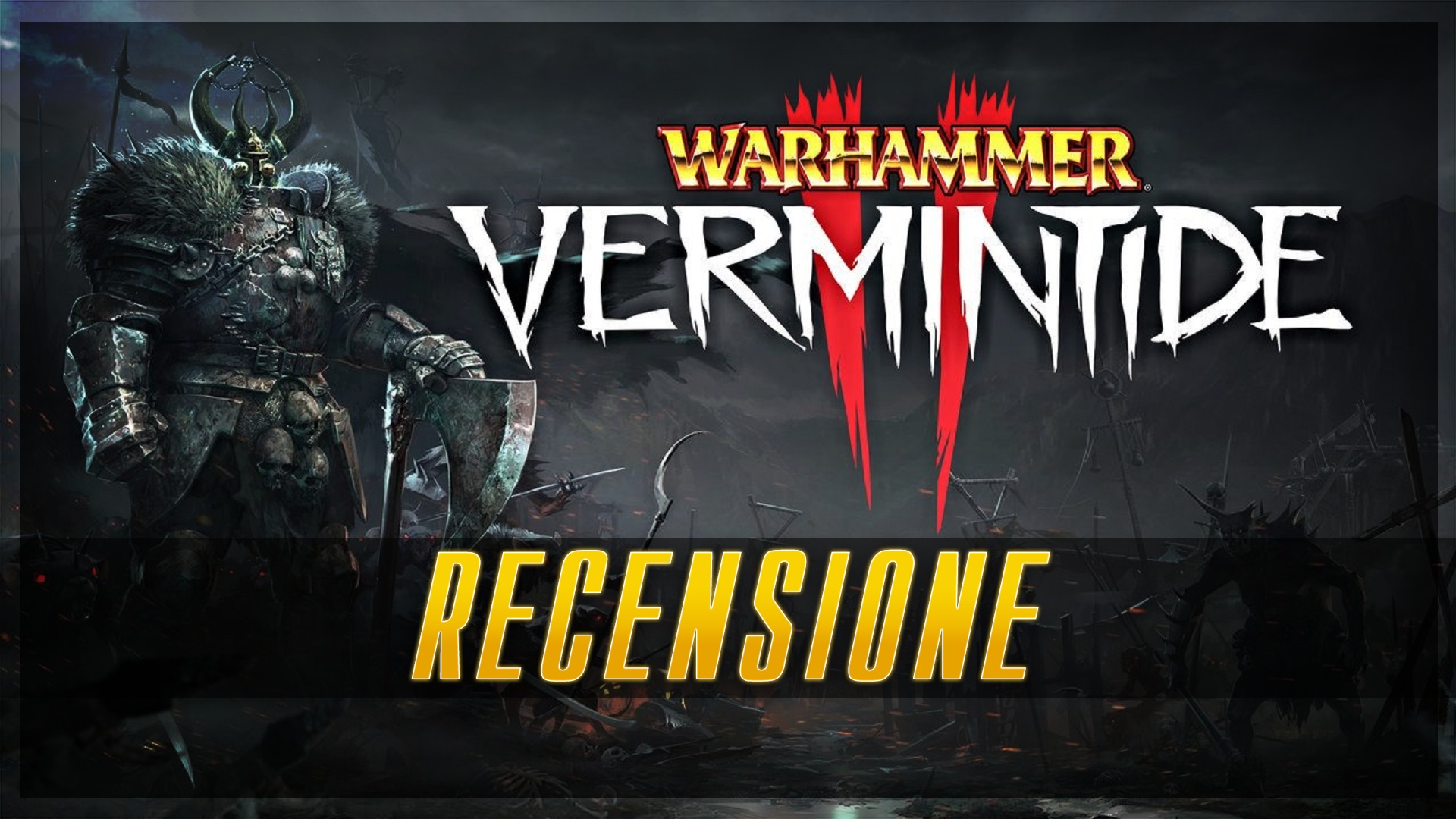 After a lucky first chapter released in the 2015, the world of Warhammer Fantasy returns to the console with Warhammer: Vermintide 2. The game is developed by Fatshark and also comes in a retail version thanks to 505 Games. I had the chance to try this edition, presented as Deluxe Edition, which is also the only one that can be found in physical format. Inside, in addition to the basic game, we find i 2 DLC Shadows over Bögenhafen and Back to Ubersreik, for a total of five additional missions beyond the thirteen basic present, and some exclusive aesthetic element for our heroes. So pray Sigmar and start reading!

The story begins immediately after the end of the first chapter, with the protagonists imprisoned and engaged in a daring escape during which they must cope, as always, with waves on waves of Skaven. This mission, which acts as a real prologue, starts automatically as soon as you choose the Online mode and briefly instructs you on the use of close-range, remote weapons and miscellaneous items. All actions that come natural if you played the first chapter. Upon completion, you are catapulted intogame hub, a huge customizable and freely explorable castle that vaguely reminded me of the Dark Souls 3 Altar of the Bond. Once familiar with the environment, it is necessary to choose one of the five heroes present: each of them, as usual, has peculiar characteristics and abilities, which in substance do not differ much, especially as regards special abilities ( at least for the base classes). Personally, I found myself right away with the Witch Hunter Victor Saltzpyre, but I also got to try the Sienna witch and the Kerillian elf. I recommend trying them all at least for one mission, just to understand which one best reflects our type of game, and then proceed with the accumulation of levels.

There is a consistent one RPG component: every time we complete a mission we acquire experience points whereby increase in level e unlock new talent, which radically change the character we are using. Moreover, each of them has also available two specializations, beyond the basic one which are released respectively at the 7 and 12 levels. Here, then, that the Witch Hunter becomes a Bounty Hunter who can carry more ammunition for his ranged weapon and, once the special ability is loaded, fires a powerful blow that pierces enemies. Or the Witch, who becomes a Pyromancer and ignites anyone in front of her. In short, even just to try the five heroes and their respective specializations they leave a good number of hours of play, all expenses within the various levels that make up the weak plot of the game. Let us say immediately that the title does not aim absolutely at this element to capture the player, how much more on the repetition of the missions, with increasing difficulty, and the accumulation of equipment. In fact, our hero has his own item level which, once enhanced by the continuous change of arms, necklaces or talismans, allows access to the highest difficulties. All the elements that make up our equipment are found in real loot boxes: but don't worry, you don't have to pay them. Inside the various levels there are hidden objects, which, if collected, increase the degree of rarity of the case we get at the end.

The missions are similar to each other but have fallen into totally different and very, very inspired environments. In fact, compared to the first chapter we find longer and more articulated sections, developed also with a respectable verticality and with a constant element of surprise. The waves of enemies always come from different places and are never composed of the same subjects, a factor that leads to keeping attention always high above all to the highest difficulties, where the challenge element often becomes overwhelming and it is very important to have allies who know how to play and stay in a group, which is rare. In addition to the classic minions put there to make up and give so much trouble, our nightmares are special enemies. Armored units and equipped with very powerful weapons, these appear when we least expect it and almost never alone. Here, then, you might find yourself in front of an Assassin, a Skaven with claws jumping on you and holding you, or a Sorcerer adept of Chaos, who attracts you and takes you away from the allies. If blocked by these units, you must be helped by one of your companions otherwise it is certain death, and that is why you must NEVER disperse.

The combat system and the continuous waves lead to a frenetic and fun pace of play, and alongside them there are also a very long series of challenges to complete and daily / weekly assignments. Furthermore, the software house also offers special challenges in time. For example, at the time of writing, the weekly event consists of completing one of the game's missions in a totally dark environment, using only a torch.

I played both offline and online and, unfortunately, there were problems. Allied AI is often terrible and several times I found myself on the ground, waiting for help, with the bots still watching me. If we then go beyond the difficulty of recruiting, the basis of the game, the comrades prove useless and being able to finish a game is a real nightmare. In online mode, on the other hand, it's not all a bed of roses. I have a fairly stable and fast connection but I found myself having incredible ping peaks (from 100 to 500, at random). I also had problems with simple access to the games since ... he couldn't find people! Unfortunately there is no Steam Charts-like system for the consoles but having difficulty finding other people with whom to play a few games in a recently released game is definitely not a good sign. There is a browser for the lobbies but I almost always had connection timeouts and was not allowed to enter the game. Usually the problem seemed to resolve with a reboot of the game, but the online structure still appears rather weak. And I repeat, all this with a stable 100Mb. I also happened to completely block the game on more than one occasion, without warning. And they are no small problems since they affect the gaming experience in a rather serious way. On balance, Warhammer: Vermintide 2 is a true evolution of the first chapter, frustrated by technical defects which, I hope, will be resolved over time. Even so, it still remains an enjoyable title and allows you to spend so many hours massacring thousands of enemies. If maybe you have people to play with, even better, you can pass on most of the present problems and think only about having fun.