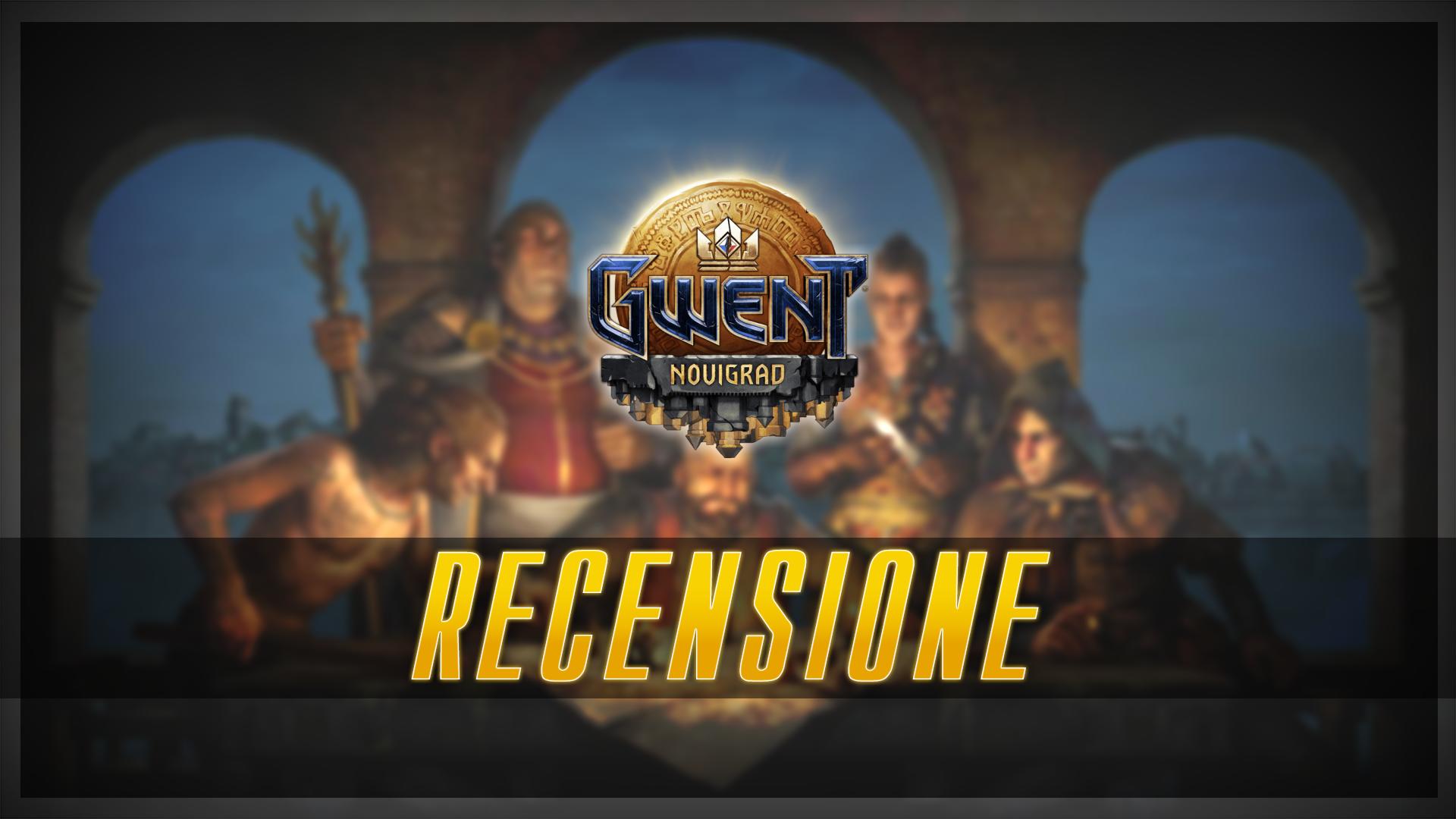 05 / 07 / 19 update: With the 3.0.1 version the most used and most problematic cards have been rewritten to bring them back in line with the power level of the other factions. The bugs mentioned in the review have also been fixed.

The new expansion of Gwent: The Witcher Card Game is called Novigrad, and fell on our PCs exactly three months after previous. The announcement of his arrival took place a little stealthily, less than two weeks from the fateful date, and he surprised even for the content, since it is an expansion entirely dedicated to the new faction: the Syndicate. No, no workers at work for their own protection, but even this Syndicate certainly has little to do.

This faction is made up of the council of the biggest criminal organizations in Novigrad, the big city that the Witcher 3 Wild Hunt players surely remember well. An impressive network of underworld, which extends from the lowest steps of its society, like beggars and pickpockets, to the highest, including church leaders and its armed wing, the well-known witch hunters. Five new leaders are unveiled, including old acquaintances like Whoreson Junior and the King of the Beggars, and more than ninety cards, which constitute the more than decent pool with which to build the decks of the new faction. The Syndicate also has access to all the neutral cards issued so far, plus the five existing factions have received a small boost, in the form of five "biclassi" cards, ie usable by the new faction but also by one of the classics, also if at the moment it is still difficult to assess whether the power level is comparable compared to when used by Novigrad criminals. What is certain is that in the new cards you can recognize many faces that are not very recommendable to you family members.

CD Projekt RED has accustomed us to an almost ridiculous artistic quality regarding card designs, and maintaining this standard is at least complex. Novigrad succeeds and does even better, showing us illustrations with almost unattainable peaks and new animations of the best ever seen, with unparalleled dynamism. There are the inevitable subdued cards, but we can't really complain from an aesthetic point of view. Various cutthroats and rogues have never been better designed!

JUST GIVE ME MONEY

The Novigrad gameplay has a lot to offer, and orbits around the great novelty made up of a single resource of the Syndicate: the coins. Money, you know, can do almost anything, in this case the coinage of the Crowns allows us to activate powerful abilities or to exploit new mechanics. The coins are produced from different cards and can be accumulated up to nine at a time, earning them or spending them following one of the following new methods introduced.

Profit- the main method of earning coins: when a card with this keyword is played, the indicated number of Crowns is earned.

Size- it is possible to put a bounty on the head of an enemy unit, earning a reward in coins in case of its premature demise.

Backlog- an ability of a card that is activated when you have at least the indicated number of coins.

Tribute- an ability, usually more expensive, which can be activated by paying the indicated amount, but only while the card in question is being played.

Rate- an ability that can be activated by spending the indicated number of coins, at any time during the match.

Madness- a unit can damage itself to pay a fee if you don't have enough coins.

Intimidation- when a crime is played, a new type of special card that often allows you to earn Crowns, this passive ability that enhances the unit is activated. 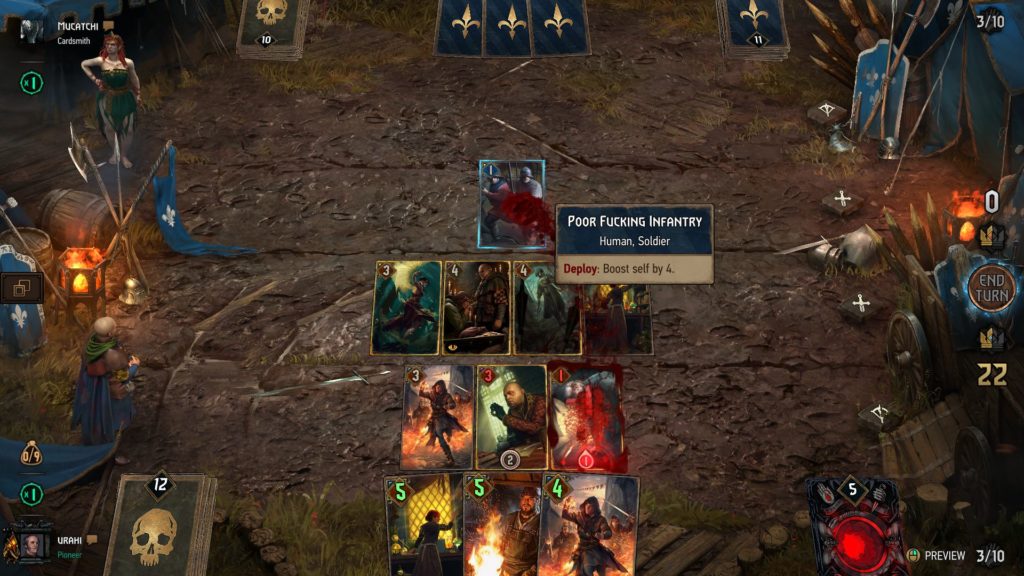 There is no denying that interpreting the underworld has a certain charm: we corrupt, maneuver and murder right and left and at our leisure. Taking the garments of the opulent patriarch of the city is just as delightful, and probably the Syndicate represents the faction best characterized so far. Unfortunately it is also unquestionably the strongest, which at the time of 3.0 version of the game, it creates good problems: it is very fun to play, while it is much less fun to play against it. Right now it makes no sense trying to impersonate another faction, so much so that the vast majority of matches correspond to mirror matches, and even within the Syndicate itself a clear hierarchy of criminals has rapidly formed. The King of the Beggars is well on top, and can afford to look at everyone else from top to bottom.

Some of the new cards are clearly too strong, both for the effect and for the extremely reduced cost of commissions: one can easily provide the incredibly powerful set of units, without compromising the deckbuilding, since even the most common and the most common uncommon cards are much stronger than the competition. Part of this disparity is due to the mechanics of the coins, in my opinion too advantageous at the moment, especially considering that half of the accumulated crowns are transported from one round to another, amplifying the feeling of fighting with unequal weapons. Unfortunately this is compounded by an annoying bug whereby the skills activated with the coins are immune to the "block" by the opponent, something that the developers have immediately made clear to be unintentional. To be fair, most players show surprising sportiness, not exploiting the bug, but it is also possible that many have not yet realized it. It certainly awaits us a hotfix soon to solve the most urgent questions, as well as a more substantial patch at the end of July, which I hope will also revive the other five poor factions a little. 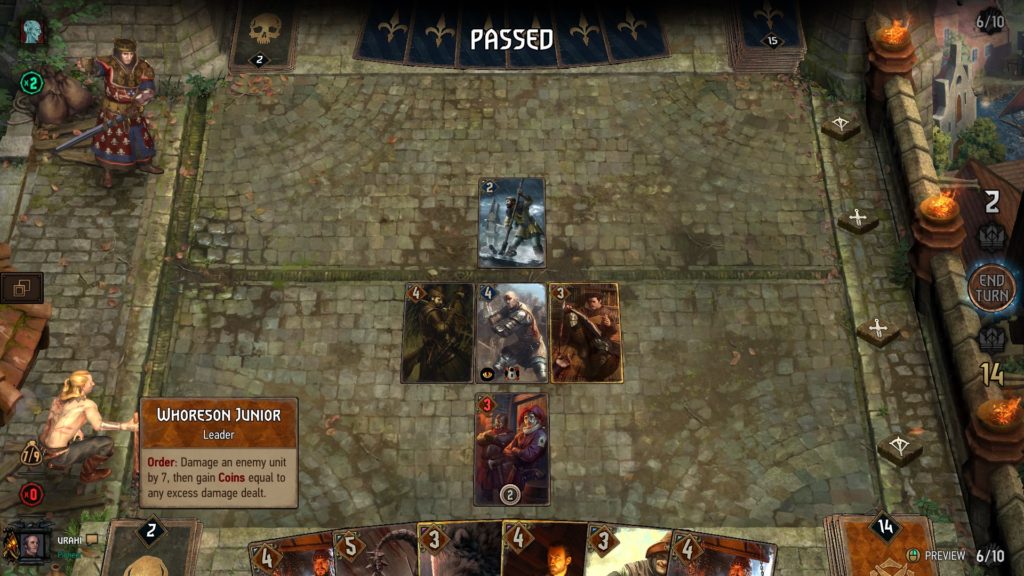 Despite these small hitches, Novigrad is a great expansion, perhaps even better than The Crimson Curse. The developers showed great inventiveness and great courage in releasing a new faction when the game started, and considering the timing some balancing problems were predictable, if not inevitable. I still recommend trying it right away, it's there too a free barrel of cards for anyone who logs in, because the new faction is really well made and fun to play. Novigrad leaves me decidedly optimistic about future content, which at this point it is reasonable to assume will be released every three months, and it is also allowed to hope to maintain this undoubted quality.