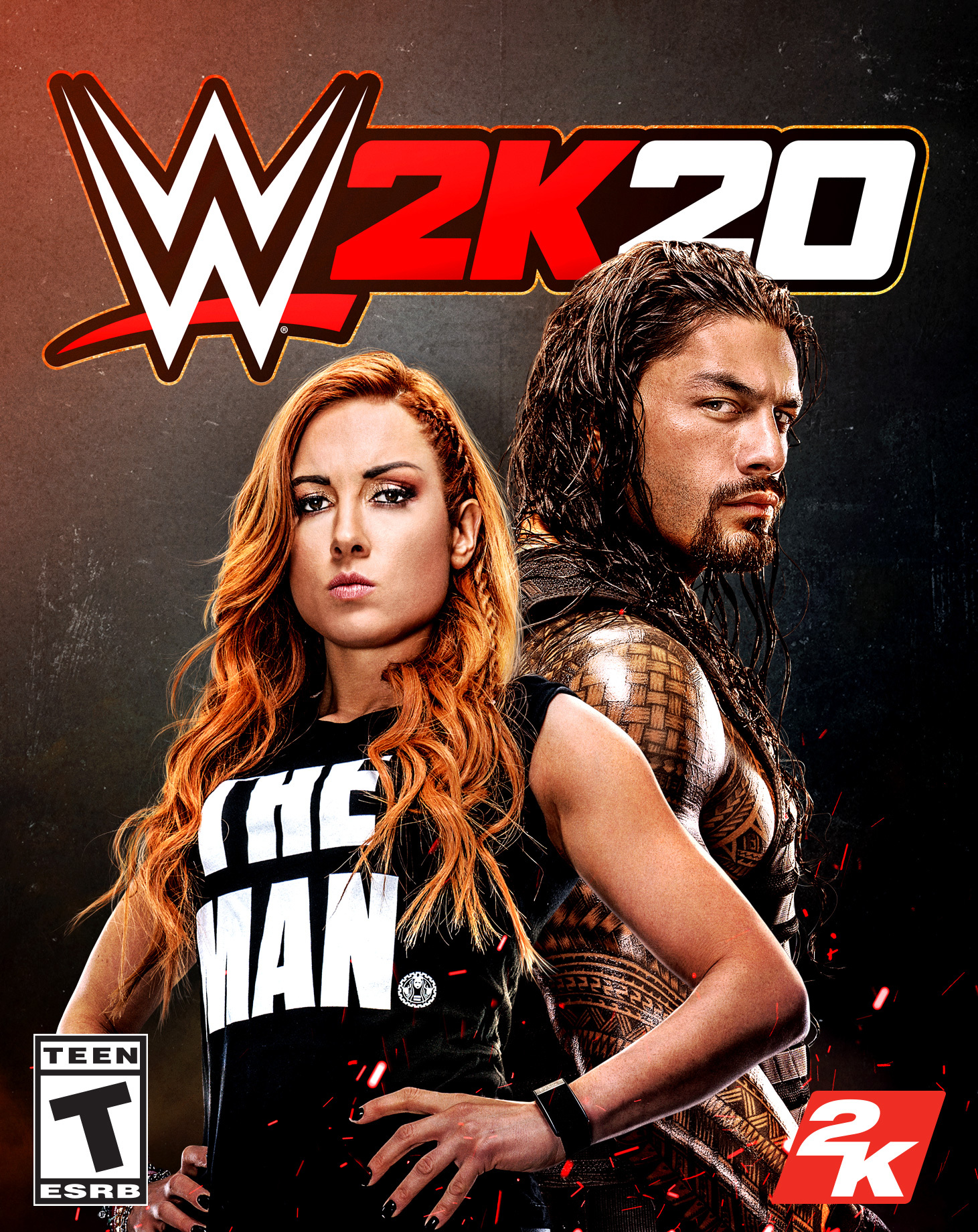 NEW YORK– (BUSINESS WIRE) –2K today announced current Raw® Women's Champion Becky Lynch® and WWE Superstar Roman Reigns ™ as the cover Superstars for WWE® 2K20, the forthcoming release in the flagship WWE video game franchise. Lynch and Reigns will serve as ambassadors for WWE 2K20's worldwide marketing campaign - "Step Inside" - which invites players to enter the world of WWE WWE 2K20 22, 2019 for the PlayStation®4 computer systems and the Xbox One family of devices, including the Xbox One X and Windows PC. Players who purchase the WWE 2K20 Deluxe Edition or Collector's Edition will receive in-game bonuses, including playable Superstars Chyna, Hulk Hogan, Mankind and The Rock, in addition to the Standard Edition game.

"My career has been about breaking barriers and doing what nobody else has done before. Being the first female Superstar on the cover of a WWE 2K video game is no exception, ”said Becky Lynch.

"As a gamer myself, being on the cover of WWE 2K20 alongside 'The Man' Becky Lynch and joining the likes of Dwayne "The Rock" Johnson and John Cena is a huge career and personal milestone for me, "said Roman Reigns.

WWE 2K20, in direct response to fan feedback, will include several franchise firsts alongside streamlined gameplay and a variety of popular modes. The story-driven, objective-based 2K Showcase: The Women's Evolution will follow the careers of the Four Horsewomen - Raw Women's Champion Becky Lynch, S Women's Champion Bayley®, Charlotte Flair® and Sasha Banks®. Controls will be streamlined to allow new players to jump into the game more easily, while experienced players will still enjoy a challenge.

In addition, WWE 2K20 players will be able to compete as both male and female Superstars in MyCAREER and Mixed Tags matches, while last year's popular WWE Towers returns with exciting new challenges, including a story-driven Tower centered around the career of Roman Reigns.

The game will also introduce a new service model - WWE 2K20 Originals - set to deliver a wealth of 2K showcase add-on content for player exploration beyond the game's initial launch. Each of the WWE 2K20 Originals will present a new playable world and its own unique theme, with more details to be announced in the coming months. WWE 2K20 Originals is downloadable content that may require additional purchase.

"Becky Lynch and the Roman Reigns are the greatest WWE landscape," said Chris Snyder, Vice President of Marketing for 2K. "They are the spirit of WWE 2K20, which is going to introduce changes requested by our fans. MyCAREER and 2K Showcase offerings, and we're giving them just that, as well as streamlined controls and our brand new WWE 2K20 Originals. We can't wait to reveal more details soon. "

About the WWE 2K20 Deluxe Edition

About the WWE 2K20 Collector's Edition

Developed by Visual Concepts, at 2K studio, WWE 2K20 is rated T for Teen by the ESRB. WWE 2K20 is currently scheduled for worldwide release on October 22, 2019 for the PS4 ™ system, Xbox One and Windows PC. For more information on WWE 2K20 and 2K, visit wwe.2k.com, become a fan on Facebook, follow the game on Twitter and Instagram using the hashtag #WWE2K20 or subscribe on YouTube.

WWE, a publicly traded company (NYSE: WWE), is an integrated media organization and recognized leader in global entertainment. The company consists of a portfolio of businesses that create and deliver original content. WWE is committed to family-friendly entertainment on its television programming, pay-per-view, digital media and publishing platforms. WWE's TV-PG, family-friendly programming can be seen in more than 52 million homes worldwide in 800 languages. WWE Network, the first-ever 28 / 24 over-the-top premium network that includes all live pay-per-views, scheduled programming and massive video-on-demand libraries, is currently available in more than 7 countries. The company is headquartered in Stamford, Conn., With offices in New York, Los Angeles, London, Mexico City, Mumbai, Shanghai, Singapore, Dubai, Munich and Tokyo. Additional information on WWE (NYSE: WWE) can be found at wwe.com and corporate.wwe.com. For information on our global activities, go to http://www.wwe.com/worldwide/.

Trademarks: All WWE programming, talent names, images, likenesses, slogans, wrestling moves, trademarks, logos and copyrights are the exclusive property of WWE and its subsidiaries. Other trademarks are their respective owners.

Forward-Looking Statements: This press release contains forward-looking statements to the safe harbor of the Securities Litigation Reform Act of 1995, which are subject to various risks and uncertainties. These risks and uncertainties includes, without limitation, risks relating to: WWE Network; major distribution agreements; our need to continue to develop creative and entertaining programs and events; to decline in the popularity of our brand of sports entertainment; the continued importance of key performers and the services of Vincent K. McMahon; possible adverse changes in the regulatory atmosphere and related private sector initiatives; the most competitive, rapidly changing and more fragmented nature of the markets in which we operate more financial resources or marketplaces uncertainties associated with international markets; our ability to promote and carry out live events and / or other businesses if we do not comply with applicable regulations; our dependence on intellectual property rights; the complexity of our rights agreements across distribution mechanisms and geographical areas; potential liability in the event of accidents or injuries occurring during the physically demanding events including, without limitation, claims relating to CTE; large public events as well as travel to and from such events; our feature film business; our expansion into new or complementary businesses and / or strategic investments; our computer systems and online operations; a possible decline in general economic conditions and disruption in financial markets; our accounts receivable; our revolving credit facility; litigation; our financial performance, which could adversely affect our stock; Vincent K. McMahon exercising control over our affairs, and his interests may conflict with the holders of our Class A common stock; a large number of shares which could be bought by the McMahons and the sale; and the relatively small public "float" of our Class A common stock. In addition, our financial results and conditions, contractual and legal restrictions on the payment of dividends (including under our revolving credit facility), general economic and competitive conditions and such other factors as our Board of Directors may consider relevant. Forward-looking statements made by the Company. Speak only as of the date made, are subject to change without obligation of the Company to update or revise them, and not to be placed on these statements.

Headquartered in New York City, Take-Two Interactive Software, Inc. is a leading developer, publisher and marketer of interactive entertainment for consumers around the globe. Rockstar Games and 2K, as well as its Private Division label and Social Point, a leading developer of mobile games. Our products are designed for console systems and personal computers, including smartphones and tablets, and are delivered through physical retail, digital downloads, online platforms and cloud streaming services. The Company's stock is publicly traded on NASDAQ under the symbol TTWO. For more corporate and product information please visit our website at http://www.take2games.com.

The future of video games will be like Spotify and Netflix according to Phil ...

Damiano Pauciullo - February 25 2020
According to Phil Spencer, head of Microsoft's Xbox division, the future of video games will be like Netflix and Spotify, with services that can be used anywhere.
BusinessWire