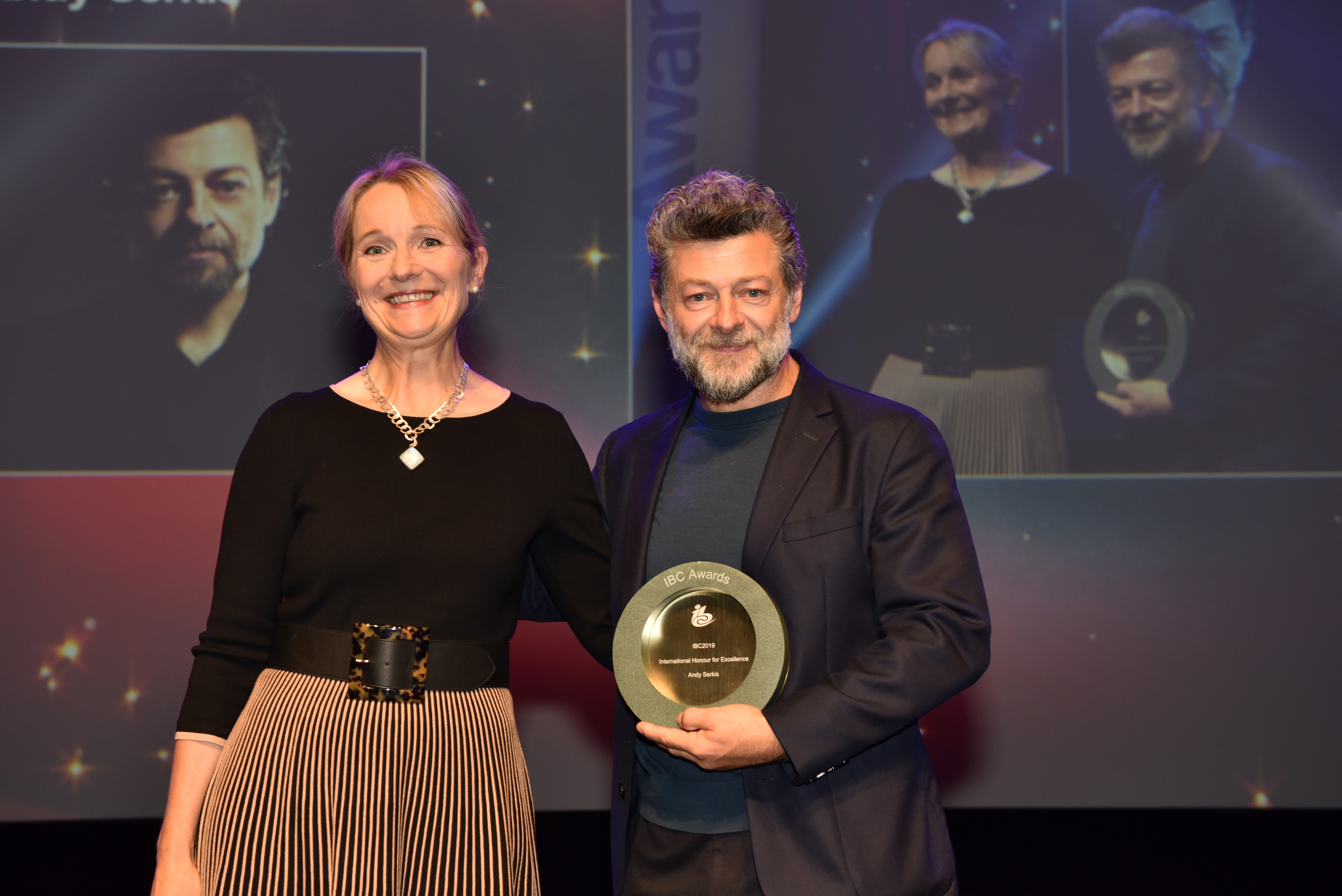 LONDON– (BUSINESS WIRE) -#IBC2019–The IBC2019 Awards saw recognition for the real - in terms of socially responsible projects and charitable bodies - and the virtual, including holograms over 5G and the cutting edge in delivering augmented reality. The two came together in the International Honor for Excellence, presented to Andy Serkis.

A remarkable live actor in theater, film and television, Serkis is now best known for redefining the art of performance capture. His skills and intensity have created characters as varied as Gollum, King Kong and Tintin's Captain Haddock: all computer generated; all dependent upon his skills and experience to create fidelity, detail, humanity.

In an on-screen tribute, actor Woody Harrelson, who co-starred in War for the Planet of the Apes, said “Andy is one of the most gifted actors I've ever encountered. It blows my mind to see how much he can convey just in his eyes. "

Accepting the award from Naomi Climer, chair of the IBC Council, Andy Serkis said “I am deeply honored to be here as a part of this eclectic, a worldwide community seeks to bring characters and stories into existence, to hopefully - to some tiny way - to change the world for the better. "

He thanked his family "Spandex and spots, God bless them", and concluded with "Thank you IBC for this most incredible award. I am thrilled and I will cherish it always ”.

IBC introduced two new awards categories this year. Competition for social impact award was so intense that the judges awarded not one but three trophies.

The first went to Turkish broadcaster TRT for its World Citizen program, and particularly for its Journalism for Juniors initiative. This teaches young people, including those in the country's large refugee camps, how to take their native social media skills and develop their story-telling abilities.

"J4J is a celebration of global access to media, which is a human right," said Zia Ahmed Eshanzada, senior campaign specialist at TRT. "We hope to encourage others to create similar programs."

Following the devastating Boxing Day tsunamis in 2004, the Indian authorities recognized as needed to monitor the threat to the sea, but to communicate information and warnings to the people likely to be affected. Gaian Solutions developed Sagar Vani, an omni-channel citizen engagement platform, which received the second of the awards.

"Proper application of technology can ensure that both of the 'haves' and the 'nots' get access to the same quality of service - especially in terms of life-saving emergency services," said Gaian CEO Chandra Kotaru.

The third trophy went to Chouette Films, an initiative of the University of London's School of Oriental and African Studies. This aims to produce academic and informative content with the smallest of environmental footprints.

As Chouette Films says, "aims for" increased impact on humanity with minimal impact on the planet. Recognizing environmentally and socially conscious film is one small step for IBC, but one giant leap for the large industry - we're over the moon to be part of it. "

The second new category recognized young people making their mark in the industry. The audience heard about seven finalists, all under 30, successful in different areas as interactive video production and business management.

The award, though, went to Vera Bichler. The HBS Broadcast Academy is a graduate of the Austrian national broadcaster ORF.

Accepting the trophy, Vera said "Today I am the first woman in directing for the ORF, but I hope a few years ago that there is a huge issue, because gender wouldn't matter."

Sail GP took the first of the three IBC Innovation Awards, for Content Creation. This is a new competition for high-speed yachts racing in scenic harbors and coastal regions around the world. Wherever the venue, though, all the feeds are routed back to Timeline Television in England, for live production in three different languages.

Fox Sports, with technology partners Epic Games and Zero Density for its new augmented reality Nascar studio; Riot Games for remote production of the League of Legends and sports championship, using Haivision technology; and Vodafone in Romania which used 5G to carry a live hologram from one side of Bucharest to the other, allowing a 10 year old guitar prodigy to play with his favorite band. Dejero, Hawthorn Theatrical, Huawei and Musion 3D were technology partners.

The IBC2019 Innovation Award for Content Distribution took us beneath the waves. Associated PressInmarsat, LiveU and Sonardyne, live broadcasts from an untethered submersible at 200 meters, using the Indian Ocean as the bearer for optical HD transmission.

Running Sports Games, Sports, Entertainment, and Sports, provided with the help of EE, Huawei, Mobile Viewpoint and Timeline Television provided coverage of a football match at Wembley Stadium, remotely produced thanks to 5G transmission of the cameras; and COPA90, with the help of Base Cloud Media developed a tremendously engaging social media platform for the 2018 FIFA World Cup.

Picking up on the social impact theme, IBC presented at Special Award to 4K 4Charity. At IBC2014, Sam Blackman of Elemental founded Saturday morning fun run. 4k was the 2014 technology buzz, and 4km seemed like a reasonable target for a run at 7.30

Sadly, Sam gave up 2017, but his charitable legacy lives on. There are now four 4K 4 Charity runs a year, and more than a million dollars has been raised for non-profit organizations concerned with increasing equality and driving diversity. Elemental - now AWS Elemental - continues to provide administrative support, so 100% of registration fees go to the good causes.

The IBC2019 event started by soccer star Robin van Persie. It saw 631 registered runners, who were joined by goat which escaped from the local petting zoo. One of the biggest cheers of the awards ceremony greeted the video which showed the goat beating van Persie over the finish line.

Accepting the award, Laura Barber said “What Sam loved about this run is how efficiently it helped us raise money for non-profits focused on increased equity, as well as letting folks engage in a healthy, unique, fun activity the intensity of tradeshow . IBC is where it all began, and we are honored to receive this award. "

This year's prize for technical papers went to researchers from Finland, seeking practical solutions for the delivery of real time augmented reality content to mobile devices. Sebastian Schwarz of Nokia Technologies accepted the trophy on behalf of his colleague Mika Pesonen and Jani Norminen of Innogiant.