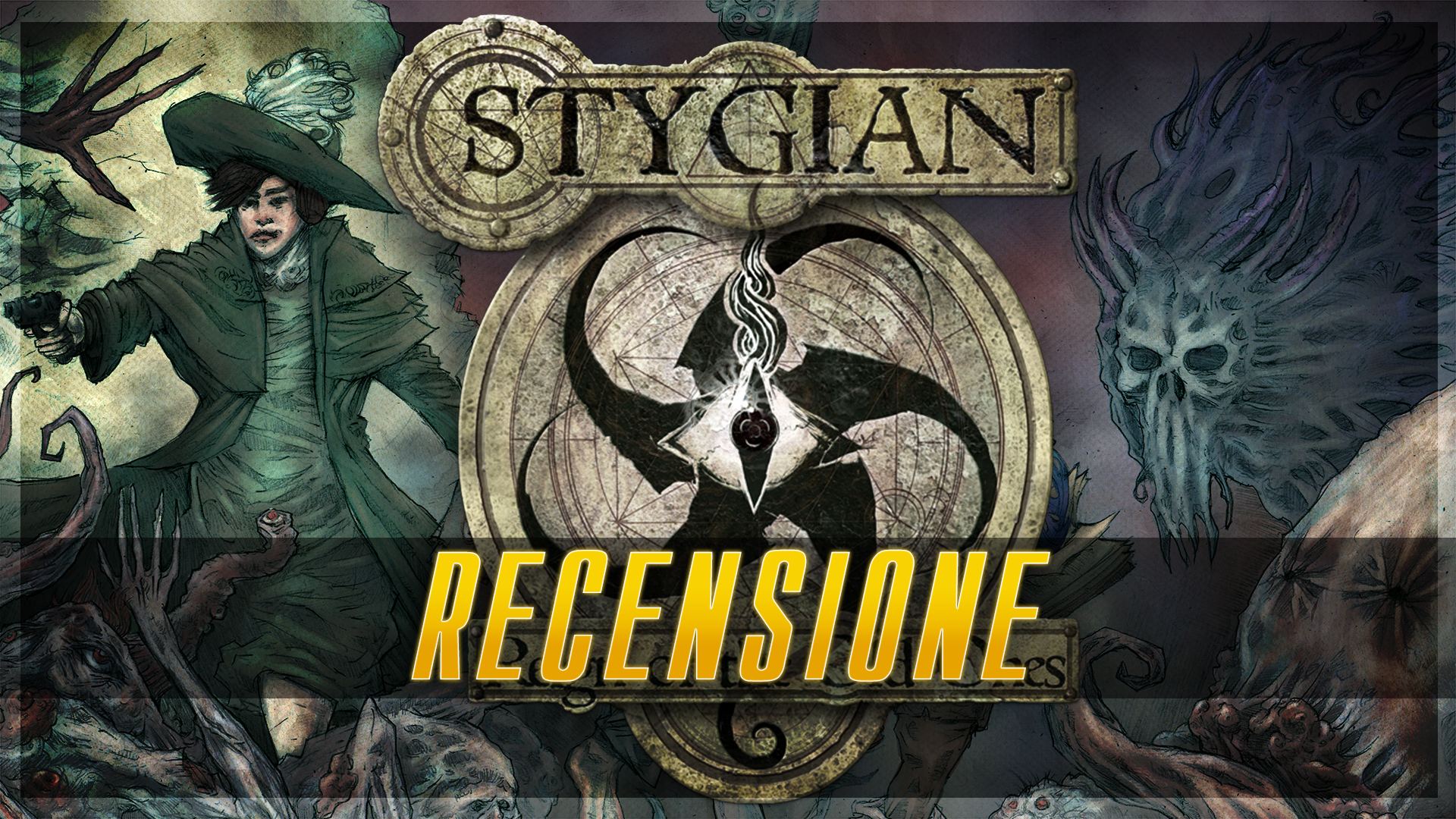 After trying it with much interest and amazement at gamescom, I couldn't wait to get my hands on Stygian: Reign of the Old Ones in its final version. The game, developed by the very nice guys from Cultic Games and published by 1C Entertainment, it's available on Steam starting today. Without getting lost in further talk, let's see what my experience with the title has been.

Speaking of useful and general info, Stygian looks like a tip and clicks 2D, with a graphic entirely hand-drawn and a plot strongly inspired by the Lovecraftian fiction. Personally, I'm not a fan of any of the three features just mentioned (as far as Lovecraft is concerned, I just never went into it), but I'm a big fan of the RPG dynamics that Stygian set out to represent. Small parenthesis: the term RPG, an acronym for Role Playing Game, today is simply abused. It seems that by now it is enough to implement a minimum of aesthetic customization of the character, to put a few options in the dialogues and tac, every game becomes an RPG. This is not the case. As the term easily advises us, a "role play", to be such, it is necessary that it gives us the possibility to choose our role in the given game world. Role that is reflected by our morality, our choices, our way of developing our characteristics, our weaknesses and our strengths. Good.
All this to say what? That while not loving the 2D, even if he does not like the points and clicks, even though he does not know the Lovecraftian fiction, Stygian managed to catch me right away thanks to a visceral, detailed, meticulous and expert development of the role play. A type of RPG that by now seemed relegated to titles like Baldur's Gate or Neverwinter Nights. If I specified "right away" it is because the scope of work done by Cultic Games is noticeable as soon as the game is opened, with the character creation menu. I hadn't seen a menu so full of stuff and so old-fashioned for so long. 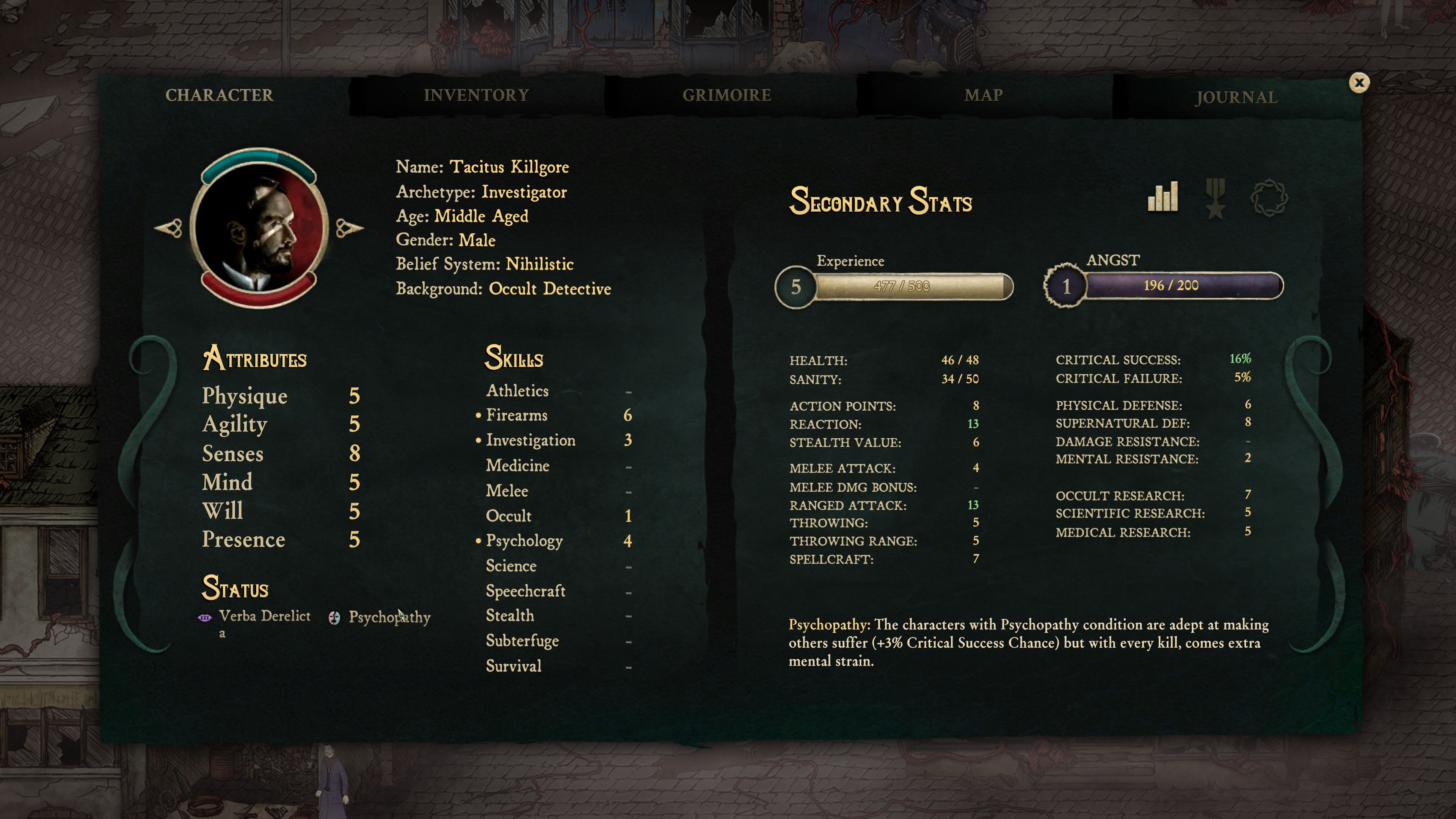 The only (almost) neutral characteristic is the choice of sex. All the others have their weight and their implications.
Deciding to be elderly gives us more experience at the expense of some physical skills; vice versa, deciding to be a young man allows us to be more powerful but less wise.
Then comes the choice of the class, in Stygian called "archetype", consistent with the era in which the game is set (around 1920). We can therefore decide to be chosen soldiers, investigators, academics, criminals and so on.
If the archetype can be compared to the class of the more traditional RPGs, the choice of the creed cannot instead be considered the most classic and "banal" alignment. The creed has nothing to do with the moral of a person, but with the way in which the latter sees and faces the world.
The "belief system" is perhaps one of the most important features of the game, as well as the one that enhances and emphasizes our role within the game.
Esoteric, rational, nihilist ... choose carefully, remembering not only that the creed cannot be changed during the game, but that it is exactly the role that you will have to play.

One of the game tips reads "Think and play like your character". What does it mean? During the many dialogues, cared for in every aspect and never banal, there are many answers we can give. Responding (and consequently behaving) in line with our beliefs, allows us to gain valuable points of "sanity", another innovative and fundamental mechanic in Stygian.
In addition to the more obvious health, in Stygian: Reign of the Old Ones we have a blue bar called Mental Sanity. If losing it is extremely easy (witnessing gory scenes, meeting to determine monsters, seeing our comrades die), regenerating it is a bit more complicated. We can regain sanity by behaving consistently with our beliefs, completing missions or simply resting.
Getting below a certain threshold of Mental Sanity can lead our character to suffer from psychosis, schizophrenia and other extremely harmful mental disorders. Once it reaches zero, our character dies. 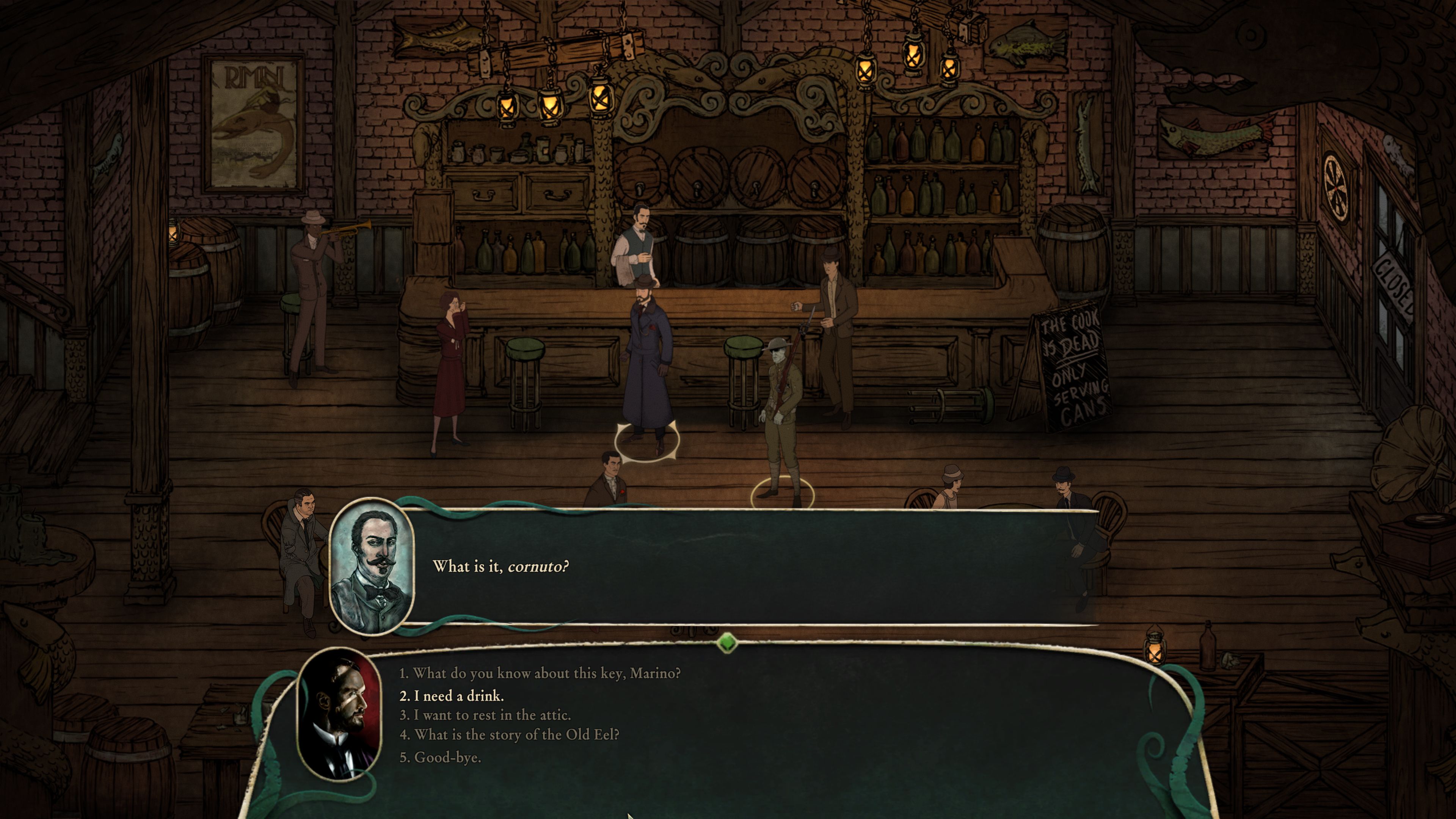 In addition to the Belief System and the Mental Sanity, the third and last great feature in Stygian is the presence of an Angst level (fear) felt by our character. Just as accumulating experience allows us to level up, participating in fights irreversibly increases our Angst level. At each level of fear reached, we are forced to choose and add to our character one of the various harmful features on the list. Going forward in the game, it is almost inevitable to find yourself with at least 2 / 3 of these permanent debuffs.

"In Stygian the aim is not to win but to last!" This is perhaps the phrase that best describes the complexity (and difficulty) of the title. Put your soul in peace: someone must die. There is no way out. I myself had to renounce my "romanticism", such as carrying out a specific secondary quest with the person involved in the group. Or simply carry with you always the same companions. Forget it, really. "Help me avenge my ghoul-eaten horse!" With pleasure, except that once in front of the ghouls the NPG in question is brutally killed and cannibalized (causing us to lose sanity) right before our eyes.
Death and madness are just around the corner and often you simply can't do anything to stop the inevitable. Stygian's world is ruthless, raw, crazy: true. Things do not always go as we wish. The opposite often happens and we also pay the consequences. 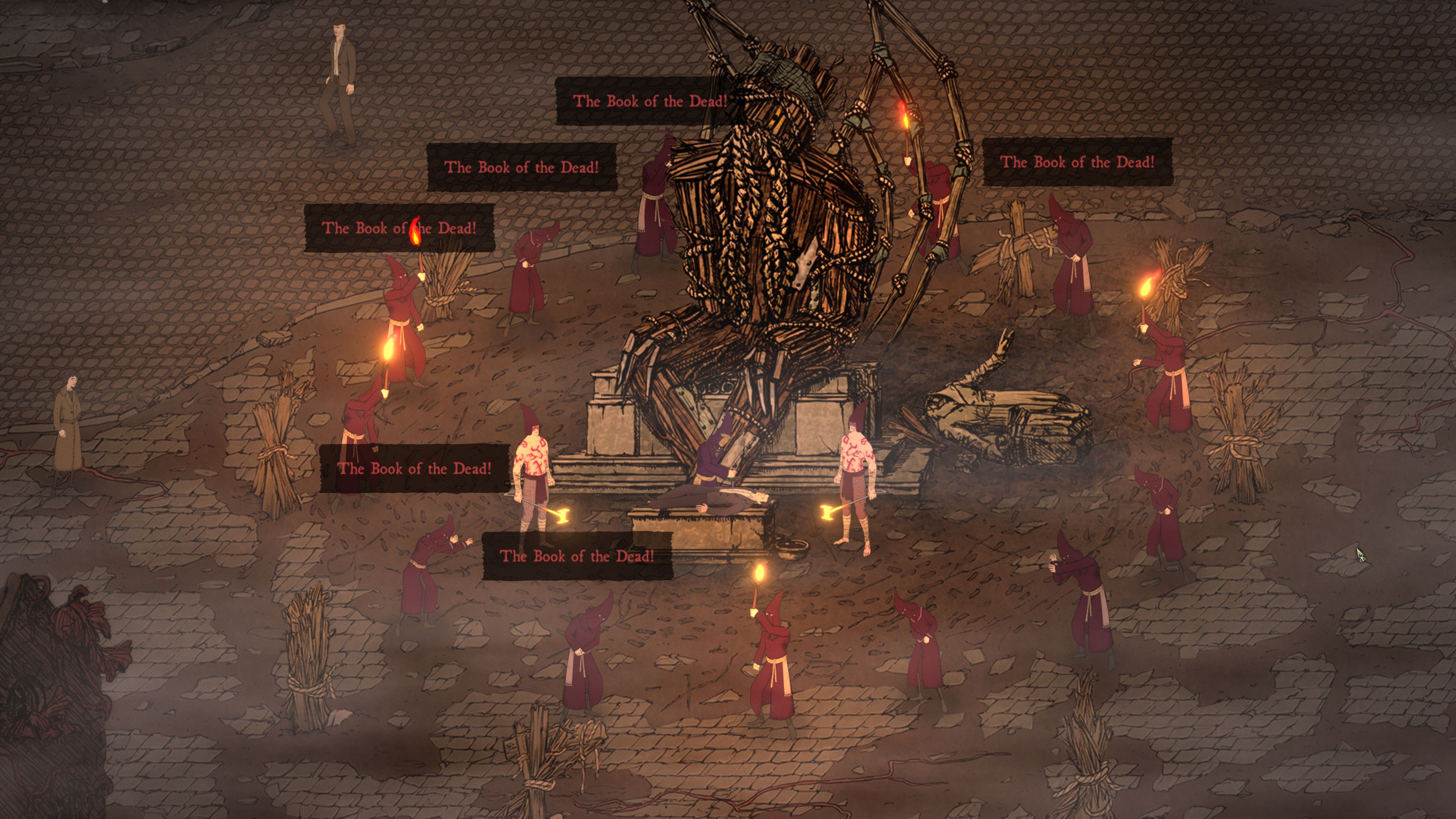 Stygian: Reign of the Old Ones is not a game for everyone. The many dynamics, innovative if not brilliant, take a long time to learn and, once understood, they are only the first step to try to complete the game. The possibility of changing difficulties is not present and every choice can be really decisive. On this, it must be said, however, the possibilities are really endless. We are hardly faced with forced roads. Fighting in the long run increases our Angst level, for example. Many times we can avoid doing it, but it requires a lot of luck and attention in finding the alternative way. In the same fights, for example, we can decide to flee (completing the fight anyway) once a certain number of enemies have been killed. Only one turn (fights are turn-based) can make the difference.
The dialogues, the plot, the characterization of each individual character allow you to fully immerse yourself in the game environment, making even the secondary missions deep, curious, interesting to complete. It could not be otherwise, let it be clear. The technical sector is certainly not something "extraordinary"; after that, I'm still happy to play an 2D tip and click if stuffed with content, innovative dynamics, dialogues and details of any kind.
Stygian is a full game, complete ... maybe too much. In fact, if you don't know the Lovecraftian narrative, the infinite references and the many information available from tomes, letters and so on become difficult to remember effectively.

With Stygian: Reign of the Old Ones the boys of Cultic Games reminded the entire videogame industry what it means to write the script of a video game; what it really means to play an RPG, what it really means to create your own character and go your own way towards the end; what it means to create a work that, to be such, does not necessarily need futuristic graphics or first-person shotguns.
Long live role-playing games, long life to the sacrosanct free will. The true one.