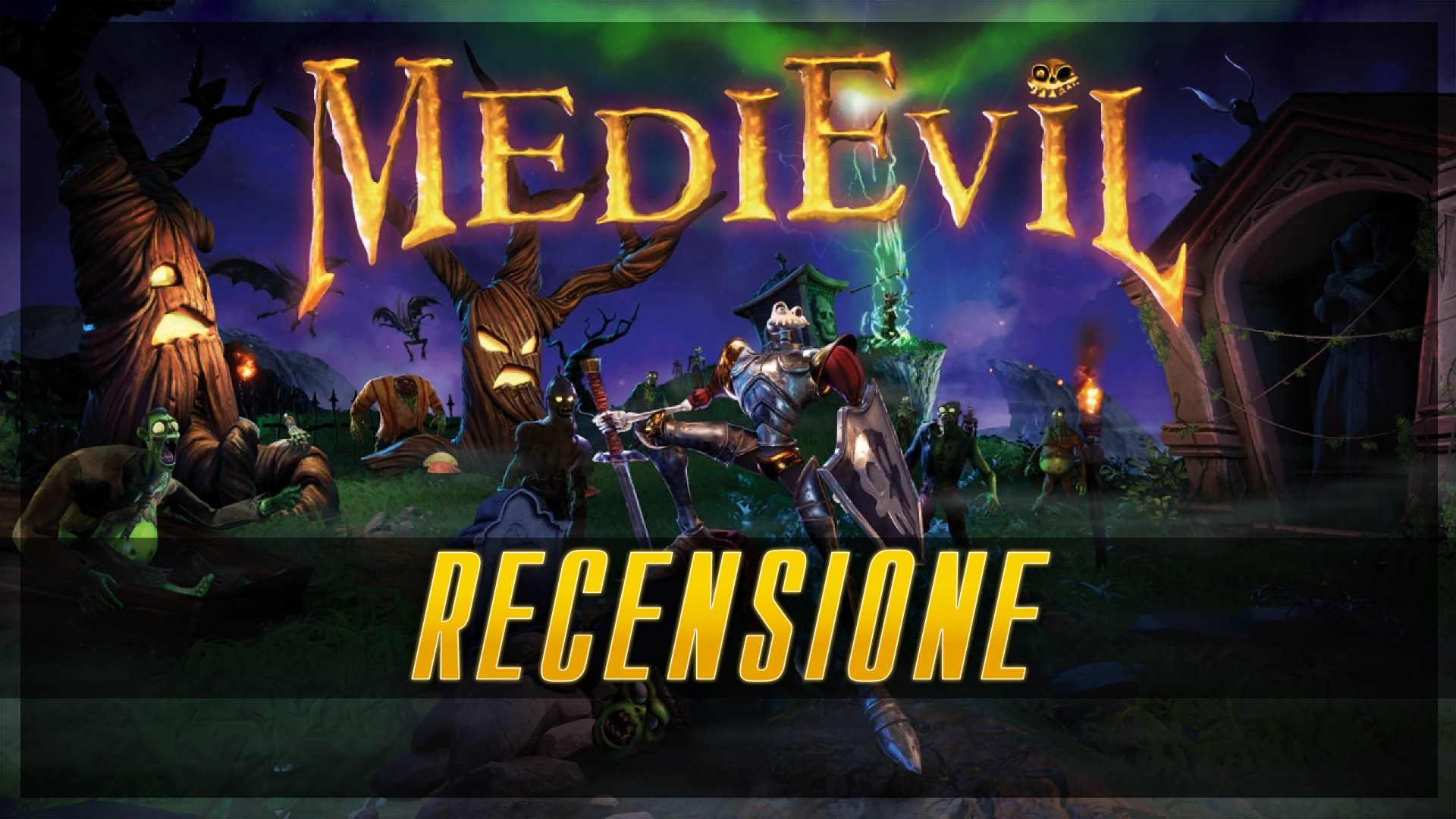 We live in an era dominated, now, by nostalgia. This phenomenon, unfortunately, has contaminated various environments and, more often than not, it is also connected to the world of entertainment, starting with cinema up to even touching video games. Speaking of the latter, it is impossible not to mention the recent remastered of the various Crash Bandicoot and Spyro, two iconic old glories that, despite today's market has also taken to other shores, have made Sony, since the nineties, one of the undisputed leaders of the video game industry.
The year in which the Japanese company decided to refer to create a (nth) remastered is the 1998, a period of great releases with games of the caliber of Spyro the Dragon o Banjo-Kazooie, just to name a couple.
By popular demand, after a very long period of anonymity, he returned to new life (this time as exclusive only for owners of a PlayStation 4) MediEvil.

The title is set in the fictitious Gallowmere region, a county known for its brave heroes and, unfortunately, for sorcerers. Zarok, the MediEvil antagonist, is one of them. In a famous battle he was defeated by the troops of the courageous Ser Daniel Fortesque or, at least, this is what is revealed by the legends told to date.

The truth, unfortunately, is another and it is much less epic than what emerged: Ser Daniel Fortesque, leader of the Gallowmere guards and an estimated figure by the whole population, is actually an impostor because he was the first soldier to die in the war , being killed by an arrow. Fate meant that the battle was still won by the soldiers of Gallowmere and that therefore their soldier was remembered for what in reality did not reflect: a martyr.
But if the people, happy to have been freed from the danger of Zarok, could simply be deceived by a lie, the spirits of those who are remembered as true heroes, who reside inside the Hall of Heroes, know the truth well and they do not at all regard poor Daniel, who is the victim of a system that erected him as a hero without actually a valid motivation.
However Zarok, despite the terrible defeat suffered by the famous battle, has harbored resentment for many years and has in mind a terrible plan to be able to conquer the county of Gallowmere again and take revenge.

But how could he take Gallowmere after such a defeat? Of course, taking advantage of what he does best: his cunning and his magic. Taking advantage of his spells, the sorcerer has resurrected the poor souls of all the corpses inside the cemetery of Gallowmere, making them, in fact, slaves of his will and threatening all the living population under his control.

However, the evil wizard did not take into account a collateral episode: his magic, in fact, brought back to life even the good, albeit mistreated, Ser Daniel. The latter, rediscovering himself alive, is ready to embark on a new adventure to make those who did not see him the figure of the hero definitively change his mind, thus finding himself free from the wizard's control and ready to fight him again.

Similarly to the plot, the gameplay of Medievil draws exactly the same mechanics (and emotions) experienced at the time of the first PlayStation: the work in fact, for the uninitiated, is a platformer with Hack 'N Slash elements where the player has to go through a series of levels, each containing a series of obstacles of varying difficulty.
As the game progresses, our hero can unlock numerous and very valuable weapons and defense objects (such as armor and shields) which are useful for the advancement of the title and which can be equipped using a special inventory (to open it simply use the touchpad of your Dualshock controller). You do be careful when using shields: in fact, they have one limited resistance to enemies' blows, therefore once the predetermined number is exceeded the object tends to destroy itself and you could find yourself having to defeat the enemies without an adequate defense. Fortunately the title allows, in some points of the map, to find treasures where inside them you could find some shields and therefore to get around any problem.

The attack methods present in MediEvil are two: physics (for those who prefer a more direct approach by exploiting weapons like swords, hammers or clubs) or distance (in this case, to be able to attack, they are used ranged weapons such as knives, crossbows or bows). In the case of the latter, the arrows you have available are limited. However, around the various levels, it is still possible to find the shops (represented by the disturbing faces of Gargoyle) where to stock up at not excessively prohibitive prices. In both cases it is advisable to pay close attention to the attack strategy that you want to use, given that the types of enemies you face have different characteristics and, in some cases, to eliminate them it is better to use remote weapons to avoid find themselves in unpleasant situations.

Recovering life in different game worlds is neither simple nor obvious: In some small areas of the map there are gods green dots that let you recharge your vital bar. However not all levels have these areas and, therefore, if unfortunately you should not find it, to resume life you find yourself having to pray to find around the potions of life that, I guarantee you, are fundamental not only to recover you but also to be able to advance in the game without making too many problems, since the potions intervene automatically (making you recover your life) as soon as you lose all the hit points.

You're wondering, but why are you telling us this Andrea? The answer is very simple: for to survive. I'll explain, the difficulty you find in the game is variable and to try to make you understand it better, I want to tell you about an experience that happened to me at MediEvil. At some point in the game (which I don't reveal to avoid possible spoilers), after a very tough battle, I found myself facing my adventure with 1 point in my vital bar and without any potion. Taken by the euphoria of the battle just ended with so much effort, after this epic result, I decided nevertheless to advance in the game but not realizing that I was unlocking the hardcore mode (and therefore from very high challenge levels) without my knowledge. The title, in fact, once the player finishes a certain level of the game, tends to automatically save the progress made up to that point, and therefore, paradoxically, I found myself in having to face the new game world with just one hit point and with a certain difficulty in being able to progress with consequent constant game over. To get around this "problem" I was forced to repeat one of the past levels again taking up both life and the precious potions.

Unfortunately this episode has a little stained the overall experience, making it in some cases quite frustrating, given that once the game over screen has been overcome, the game forces you to repeat the level of the game from the beginning without the possibility of having any check point. Moreover, unfortunately, loading screens are extremely long and I happened to have to wait at least 2 minutes before (re) starting the game session.

MediEvil offers, apart from the usual levels, even small subquest that make the title even more long-lived. Fortunately, in my test, I am not stuck in sensational frame rate drops even though, when the shares are excited, the stock suffers slightly.

An honorable mention deserves it the wonderful soundtrack that will gladden you (and worry you) every time you hold the pad in your hand. The dubbing is less pleasant, discreetly cared for as it was in the original version. 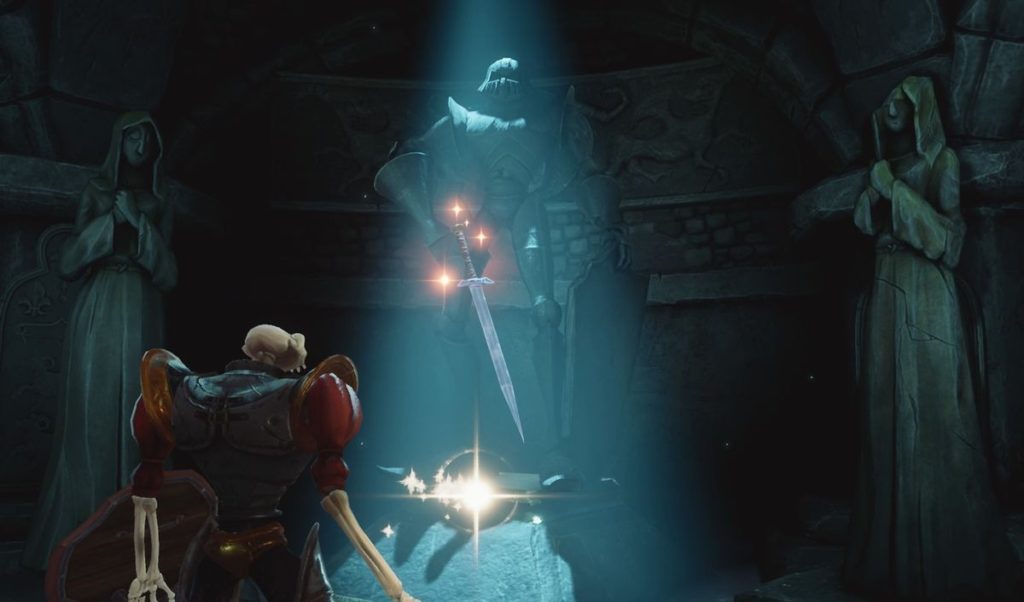 The work done by the guys at Other Ocean Interactive is certainly remarkable, and we are sure that, in this prestigious October, the remastered of MediEvil will succeed in establishing itself very well in the videogame market despite the fierce competition of some vaguely horror games under the period of Halloween.