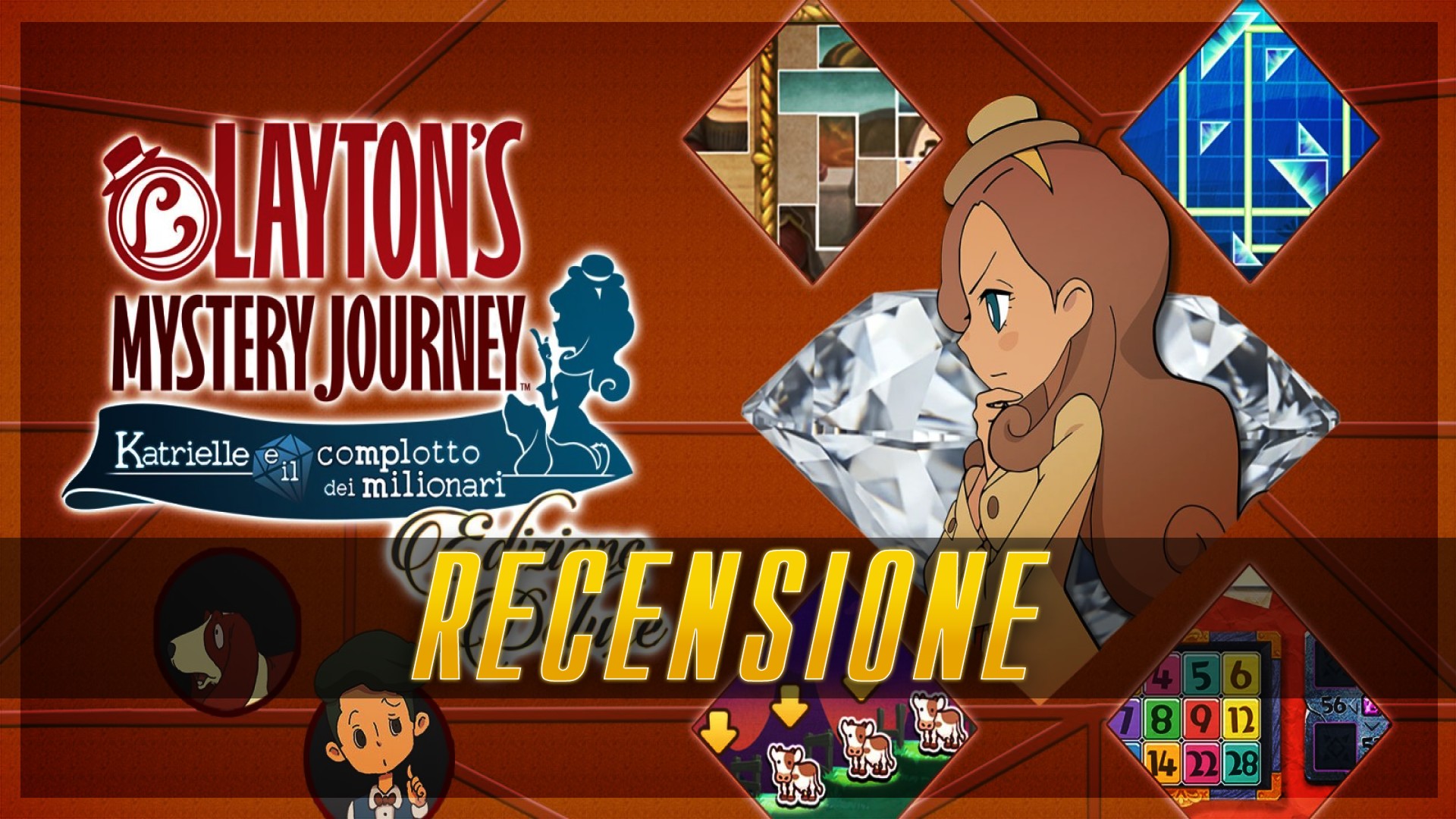 LAYTON'S MYSTERY JOURNEY: Katrielle and the conspiracy of millionaires arrives on Nintendo Switch a couple of years after its release on the wonderful little Nintendo 3DS. It is with mixed emotions that I approached this porting: part of me was undoubtedly enthusiastic. I love the Layton saga, and the landing on the hybrid Nintendo could bring new life to the series, representing only the beginning of a new glorious season. I hadn't even realized how much I missed playing with it, but I was pleased to see how much I relax when it comes to solving puzzles, especially in the company of the bubbly Katrielle. On the other hand, this release is a bit of a defeat: we have been waiting for a real sequel for two years, and there is still no sign of it. History has remained dormant, and it is a euphemism: there are a billion questions open and awaiting an explanation, including disappearances, mysterious relationships and talking dogsthe. It's not nice to leave us so dry, isn't it? 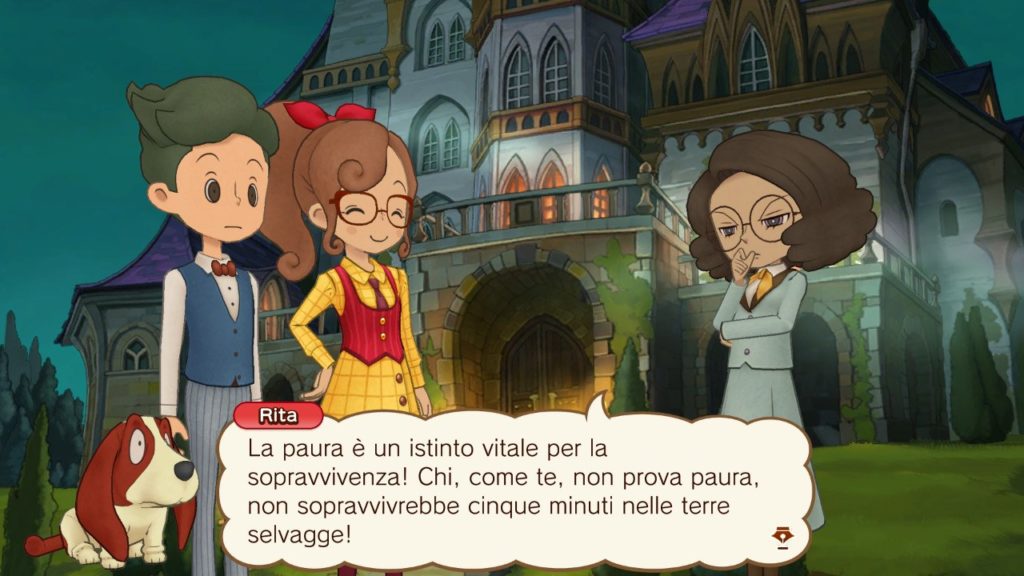 LAYTON'S MYSTERY JOURNEY: Katrielle and the millionaires conspiracy does not make significant differences to its portable console version, but represents the first time ever in which the series is playable on the TV screen. And it's beautiful: a lot of work has been done on the graphics, and it's really nice to see. The controls are unfortunately another pair of sleeves, as like all the points and clicks, the game suffers without the touch screen. You can also use motion control, which I find personally inconvenient, but the best way to explore remains in portable mode, using your finger on the touch pad. Also this system is less rapid and precise than the good old style, since being the less thin finger it tends to cover the points of interest in the environment. The result is that, compared to the version for 3DS, coins or secrets are more likely to be lost on the street, since investigating the entire screen is less practical. However we can do a reason for it, and moreover it is appreciable that the developers have provided so many methods of control available. 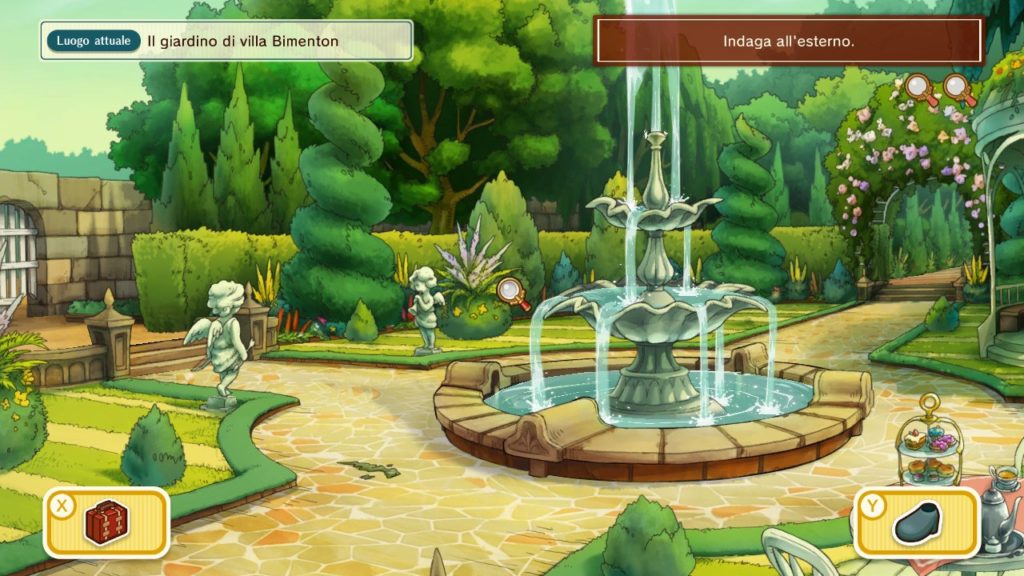 The puzzle screens have been completely revisited to adapt them to the single screen, as well as the keys to press to interact with the various elements, numbers and answer boxes: from this point of view I find that an excellent job has been done. As for the additional content, we have 40 new puzzles, obtainable in the extra modes and among the riddles of the day, and this consecrates LAYTON'S MYSTERY JOURNEY: Katrielle and the millionaires conspiracy as a Layton series game with more puzzles than ever. There are also extra clothes available for Kat, who were originally exclusive to the mobile mode, and some wonderful, gorgeous, exciting outfits for the little dog Sherl, which I proceeded to get in the early hours of the game. So let's not talk about a number of glaring additional elements, but I personally think it was worth the trouble to make this porting, since the title didn't enjoy the attention it deserves, and could have new luck on Nintendo Switch. 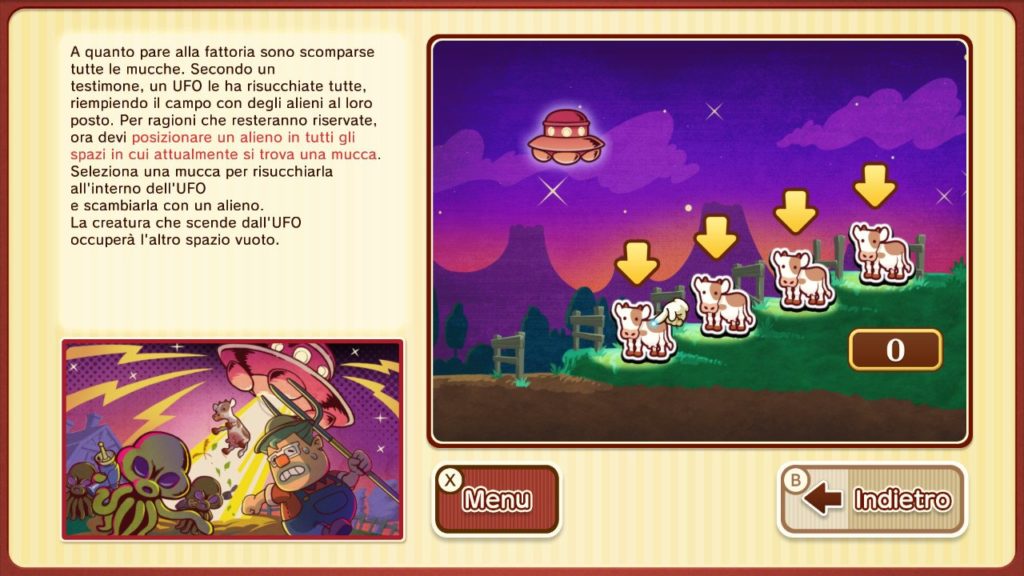 The strong point of LAYTON'S MYSTERY JOURNEY: Katrielle and the conspiracy of millionaires, as in all the titles that precede it, is history and atmosphere. The young Katrielle does not yet have the experience of her father, but defends herself more than well: she is charismatic and knows what she wants, especially in the case of food or clothing. And for this, I deeply respect it. The cast of supporting actors is enriched by a Cavalier Servente with a turbulent history, the young Ben, and Sherl, a dog with a mysterious birth. There are also many other characters that we encounter in our investigations, some of them old acquaintances from decades before, when Hershel Layton still ruled these lands. Is it possible that they haven't aged at all? 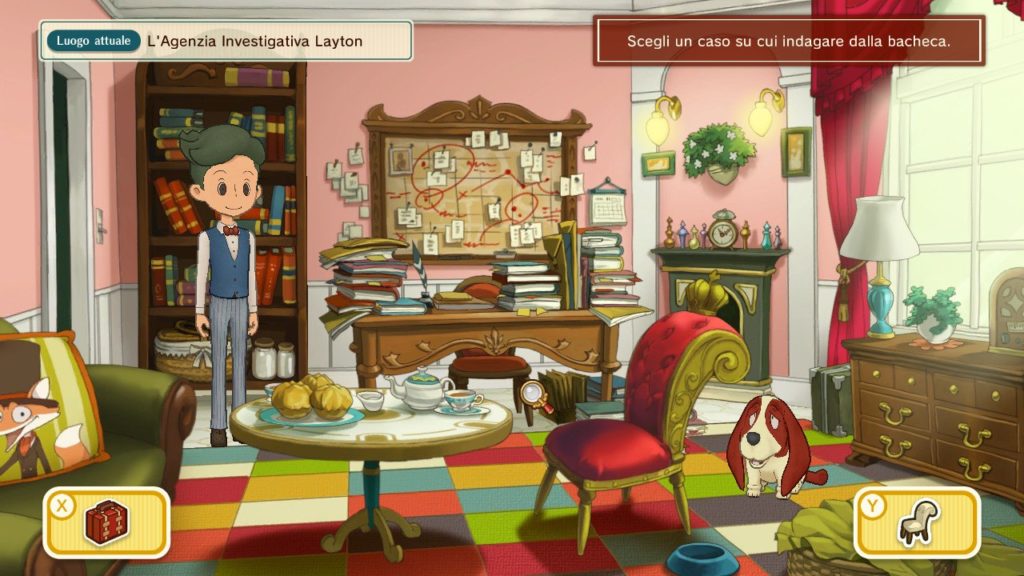 The mysteries that we are supposed to solve are apparently separated from each other, and lead us to deal with incredible thefts, disappearances of domestic animals or phantasmagorical apparitions. Everything at first glance appears lighter and with a more bland rhythm compared to the adventures of father Layton, but in the end we discover a common thread between the various episodes, and we cannot fail to be involved in the story. I really enjoyed the adventures of Katrielle, exactly as it happened to me in the 2017, and I keep crossing my fingers, hoping that Level-5 is worthy of a second chapter. There are too many questions left unresolved, and it is painful to think that we will no longer know anything about the life of these adorable characters. The first title of Professor Layton came out more than 12 years ago: we know them and have been following them for a long time, don't disappoint us! 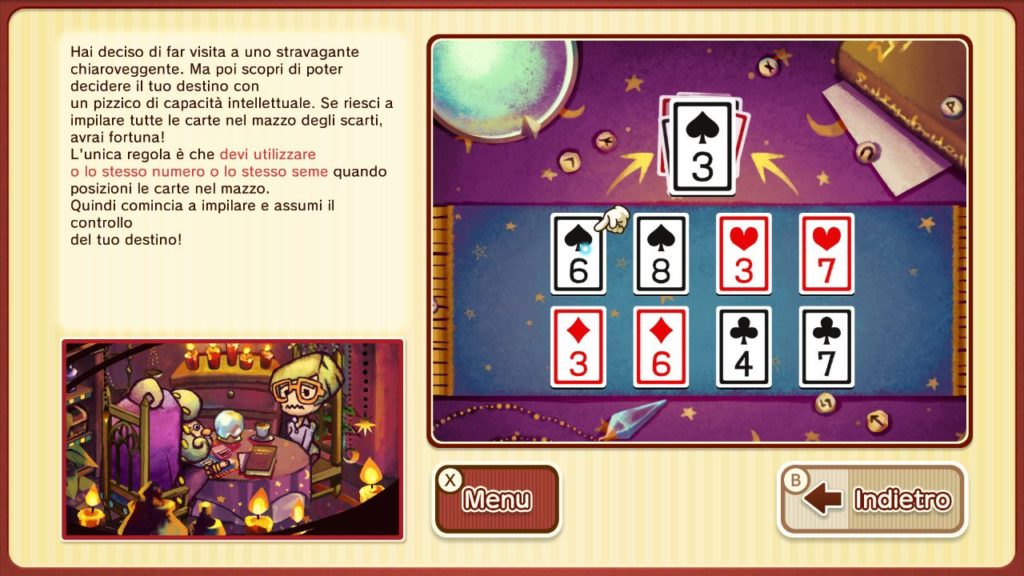 The difficulty level of the enigmas in LAYTON'S MYSTERY JOURNEY: Katrielle and the conspiracy of millionaires is not particularly high, thanks to the presence of innumerable help coins and related useful and well explained hints. There is however a wide variety of puzzles available: there are all genres, but elements of lateral and linguistic thinking predominate, those of mathematics and visual abilities in short supply. There are also three mini-games, as is classic of the series, which instead can be really difficult to deal with. I loved them all three, because they are varied and well made: I find them among the best in the series so far. Especially the one on the restaurant, because, well, I love to eat.

The sore point of the whole experience is the presence of numerous translation errors in the various puzzles, of which I had already complained at the time. There are at least 4 or 5 puzzles that are simply unsolvable for an inaccurate or totally incorrect English translation job, and I find it simply unacceptable that the problem was not corrected in the deluxe edition. LAYTON'S MYSTERY JOURNEY: Katrielle and the millionaires conspiracy requires an average knowledge of the English language to be appreciated, and the translation is necessary to make it usable to a large slice of the public, the same one that played the previous titles in the past. Such sloppy work damages the game and causes frustration in the players. 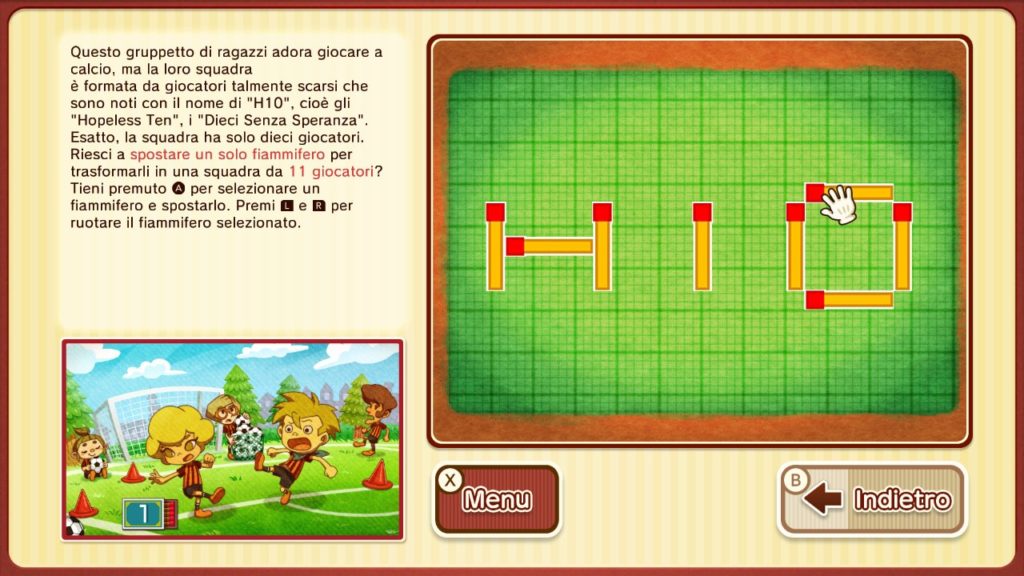 All the rest of the title is simply adorable. The character design is adorable. The little drawings in puzzles are adorable. The music is even sumptuous, and the amount of activity to be done is endless. LAYTON'S MYSTERY JOURNEY: Katrielle and the millionaires conspiracy is a long-lived and well-made title, which can keep anyone in the Nintendo Switch, even those who are not really passionate about puzzles, glued to. Despite the small problems, I recommend it to anyone who owns the Nintendo hybrid console, for two reasons. The first is that everyone should play at least one title in the Layton saga, which has made history in its own small way, and the second is that I sincerely hope to rekindle attention on Katrielle and her friends. Let's toast: let it be the beginning of a new series led by the brilliant investigator.

Close to the Sun Review