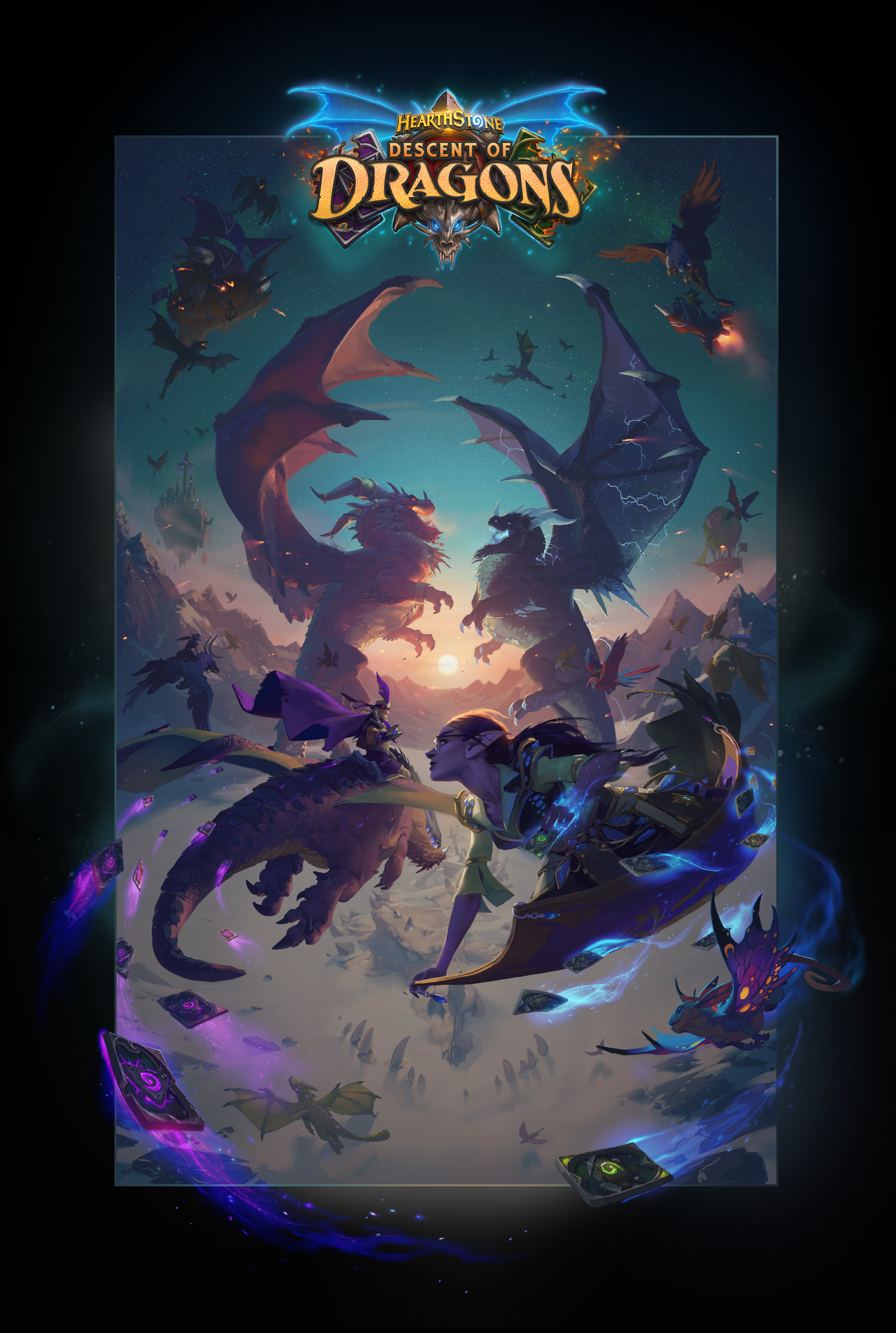 IRVINE, Calif .– (BUSINESS WIRE) -December 10, 2019, The Year of the Dragon—Galakrond, the mightiest dragon of all time, threatens to raze the surface of Azeroth in Descent of Dragons ™, the new 135-card expansion released today for Blizzard Entertainment's smash-hit free-to-play digital card game Hearthstone®. This action-packed card set sends players to the skies above Dragonblight for a thrilling battle between the League of Explorers—Hearthstone's plucky band of treasure-hunting heroes — and Archivillain Rafaam's nefarious League of EVIL

In Descent of Dragons, players will draw on the power of dragons - lots and lots of dragons. They'll summon all-new Legendary Dragons, lay waste to the battlefield with their breath weapons, and power-up by embarking on heroic Sidequests. In addition, the five "EVIL" classes — Priest, Rogue, Shaman, Warlock, and Warrior — can transform into Galakrond himself through one of five new Hero cards, each with a class-appropriate Battlecry and Hero Power.

Minions and spells with the new invoke keyword will trigger the effect of Galakrond's Hero Power. Invoking multiple times upgrades Galakrond into his deadlier forms, the mightiest of which is "Galakrond, Azeroth's End" —a world-shattering monstrosity armed with a quadruple-strength Battlecry and a powerful claw attack.

Will Rafaam succeed in his plot for world domination? Will Reno Jackson stay out of trouble long enough for the League of Explorers to emerge triumphant? These answers and more will like in the corresponding Descent of Dragons Solo Adventure, a story-driven epic ending to Hearthstone's first-ever year-long story line to be released in January.

"Descent of Dragons is full-blown fire-breathing fun, and filled with the vibrant personality and strategic decision-making Hearthstone is known for, ”said J. Allen Brack, president of Blizzard Entertainment. "We think players will have a powerful new Galakrond Hero cards — or finding ways to keep him from taking the game. "

Descent of Dragons launches during the ongoing beta test for the popular new game mode Hearthstone: Battlegrounds a raucous eight-player auto-battler featuring 24 unique Heroes, which players will recruit minions, strategically position them, and watch them battle each other for supremacy.† Following last month's debut at BlizzCon, millions of players flocked to the tavern to take part in the Battlegrounds early access period and open beta test. That momentum has continued, with Battlegrounds fueling ongoing excitement for Hearthstone among veterans and new players alike.

Hearthstone: Battlegrounds is a free standalone experience that doesn't require a card collection. Players will be able to unlock optional bonus features for this mode when they acquire card packs - including free packs, those acquired with in-game gold, and those purchased with real money - from the most recent Hearthstone expansion (starting with today's launch of Descent of Dragons).** At 10 packs, players unlock comprehensive stat-tracking in Hearthstone: Battlegrounds; at 20 they can choose their heroes from three different options; and at 30, players unlock the ability to playfully communicate with their opponents using a visual emote system.

To learn more about Descent of Dragons, fly on over to www.descentofdragons.com. For more on Hearthstone: Battlegrounds, visit https://playhearthstone.com/battlegrounds/.

*Limit one set of Descent of Dragons login rewards per account. Must log in by March 31, 2020 to redeem offer.
†2GB of memory is recommended to play Battlegrounds on iOS and Android devices.
**Bonus features are unlocked for limited time and reset at the launch of each new Hearthstone expansion.

With more than 100 million players worldwide, Hearthstone is Blizzard Entertainment's internationally acclaimed, free-to-play digital card game designed for novice and veteran card-slingers alike. Players can choose from nine powerful heroes and minions, spells, and weapons based on the unique fantasy of the Warcraft universe. Featuring a variety of game modes from epic head-to-head to story-driven Solo Adventures, Hearthstone offers a vibrant and rewarding experience stacked with strategy, personality, and fun. Hearthstone is available globally for Windows and Mac PCs; Windows, iOS, and Android tablets; and iOS, and Android mobile phones.

Best known for blockbuster hits including World of Warcraft®, Hearthstone, Overwatch®, The Warcraft, StarCraft, and Diablo franchises, and the multifranchise Heroes of the Storm®, Blizzard Entertainment, Inc. (www.blizzard.com), a division of Activision Blizzard (NASDAQ: ATVI), is a premier developer and publisher of entertainment software renowned for creating some of the industry's most critically acclaimed games. Blizzard Entertainment's track record includes twenty-two #1 games†† and numerous Game of the Year awards. The company's online gaming service, Battle.net®, is one of the largest in the world, with millions of active players.

††Sales and / or downloads, based on internal company records and reports from key distributors.

Piermatteo Bruno - May 12, 2021
In recent years, fan games have always been a means of expressing one's love for a particular IP. However, many of these ...
News

Di Sarno Raffaele - May 11, 2021
In the past few hours, through a post on its official Twitter profile, Electronic Arts announced that the EA Play Live, the summer event through which ...

Madden NFL 21 Attracts the Most Sponsors in Madden NFL Championship ...