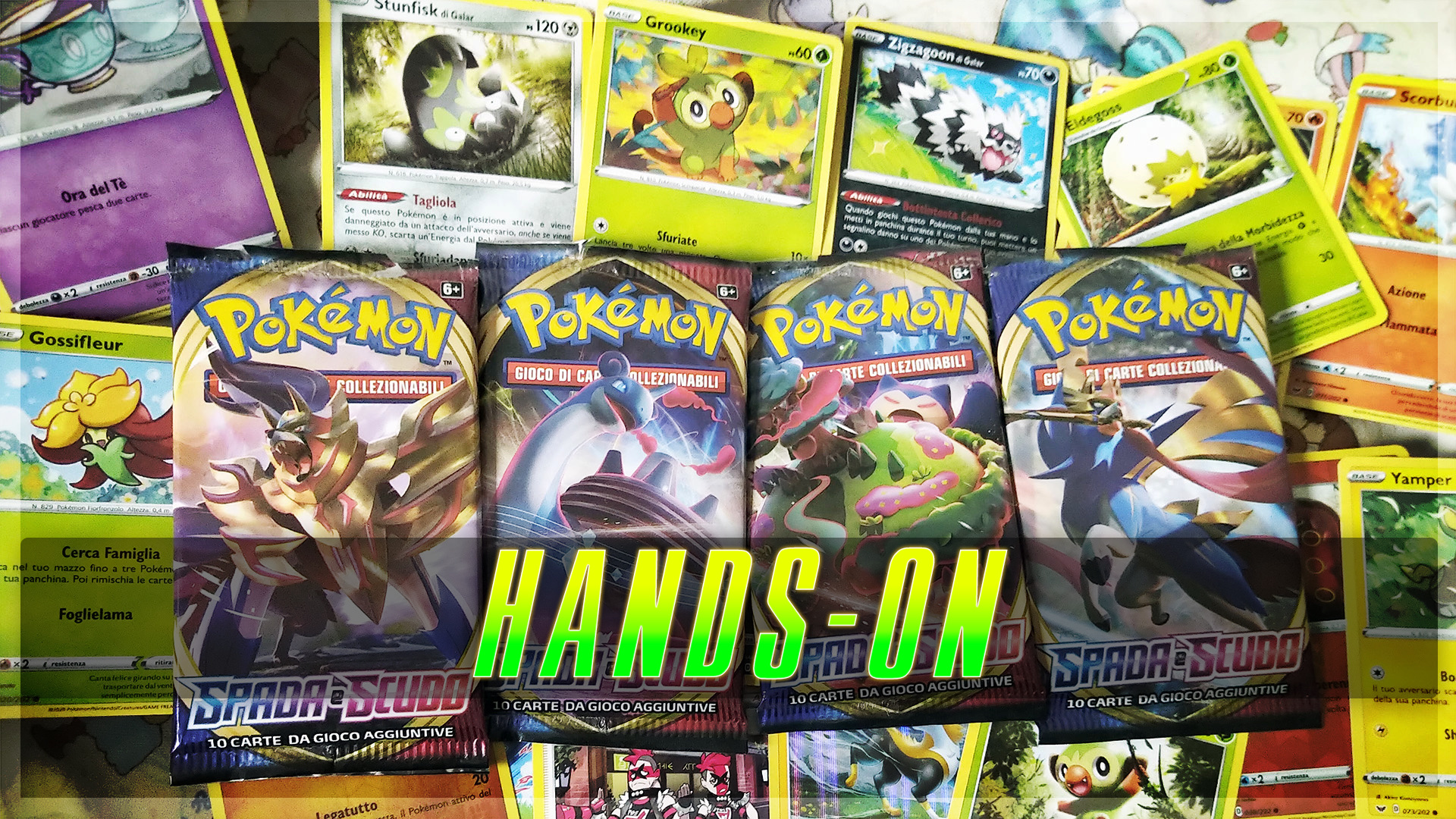 ALL THE DETAILS OF THE SWORD AND SHIELD EXPANSION

The TCG Sword and Shield expansion it landed in stores on February 7, 2020, introducing a series of rather relevant innovations, as well as a large amount of really nice new cards to see and collect.

Sword and Shield carries 15 Pokémon V, special cards of great power, which if defeated earn the opponent two prize cards. 4 are also introduced Pokémon VMAX, evolved forms of the previous ones, which are not only represented by fabulous artwork, but also have a stratospheric PS value. Snorlax VMAX, for example, has the beauty of 340 PS: decidedly tough to throw down. The prize for defeating these giants is three cards. It is also mandatory to report the arrival of a new Special Energy, the Aurora, which works a bit like a wild card, but requires discarding a card from the deck in order to be attached to a Pokémon. And it is beautiful to see

There are however other innovations that have been made to the GCC in conjunction with the release of the new cards, and the first is strength enhancement. Sword and Shield Pokémon take -30 less damage from the elements they resist, instead of -20, and that's no small change. Some of the same combinations have also been modified: in some cases water has become weak to grass instead of lightning, and psycho is now weak towards darkness (as it should be), which in turn takes them from grass. The goblin type is again absent in this expansion. A new penalty has also been introduced for the player who starts first, since not only can he no longer attack, but he cannot play help cards either. 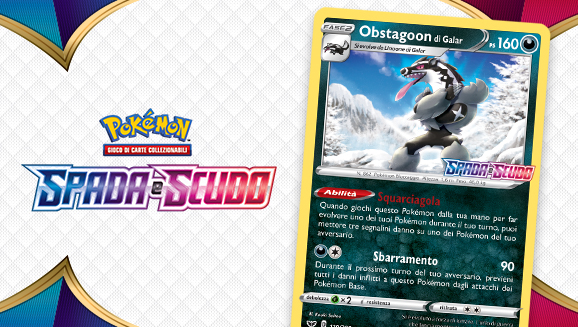 There is a lot of meat on fire, and a nice incentive has also been announced: by spending at least 9,99 in Pokémon TCG material in the GameStop, Prénatal and Toys Center, you can receive one of the two Sword and Shield promo cards. They are giant Snorlax VMAX (literally) and Galar's Obstagoon, the latter card that looks quite promising.

And now ... off to the wild unpacking.

The mandatory premise is that my luck is less than that of a normal person, so I never get sensational results from the sachets. This time with Spada e Scudo it went a little better than usual. Here are the most interesting findings. 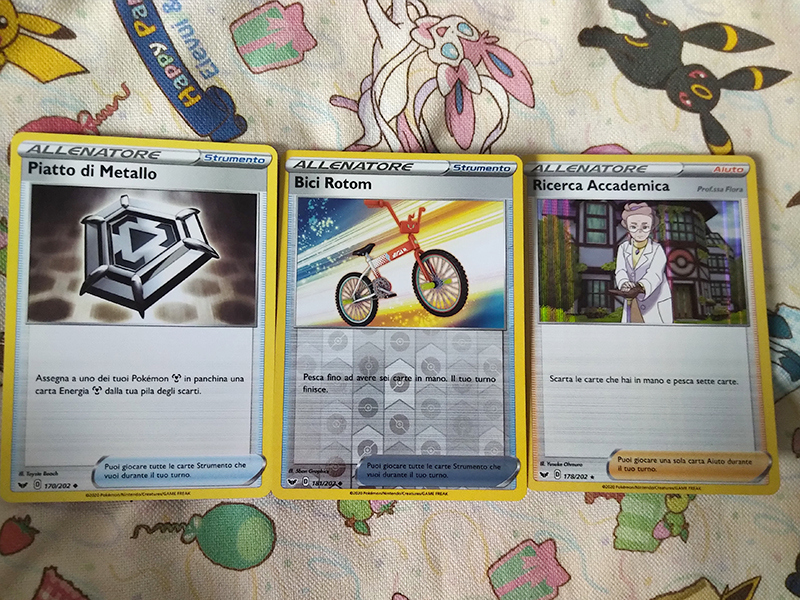 Among the most interesting Trainer cards, here Metal plate, which allows you to assign a metal energy from the discard pile. Metal Pokémon may become quite relevant, and speeding up energy allocation is often a winning strategy. Bike Rotom allows you to draw up to six cards in your hand: often useful for recovering. And then I find it very pretty. Finally, I found the Professor Flora. The novelty is that now these cards are called Academic Research, with the name of the researcher in the upper right corner. You can still have one per deck, therefore not compatible with Platan and Aralia. 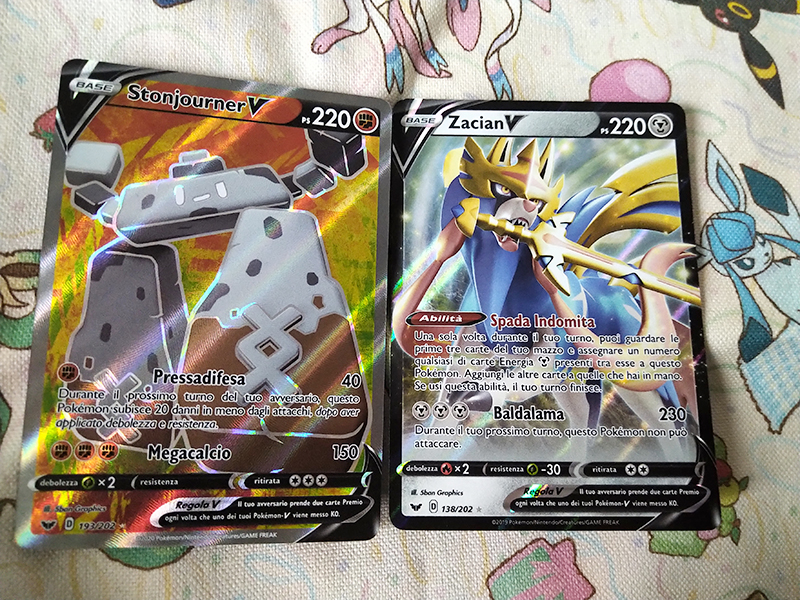 Zacian V is a damn powerful card: 230 of Baldalama's power isn't a joke. His ability allows him to charge him with metal energies as much as I can. Also note its resistance to grass, which is said to be -30.

Stonjourner V it is a Pokémon that I appreciate, and moreover it is the only ultra rare one that I have found. Sbrilluccica which is a marvel! Note also that it is one of the 4 Pokémon that have the VMAX evolution in this format. 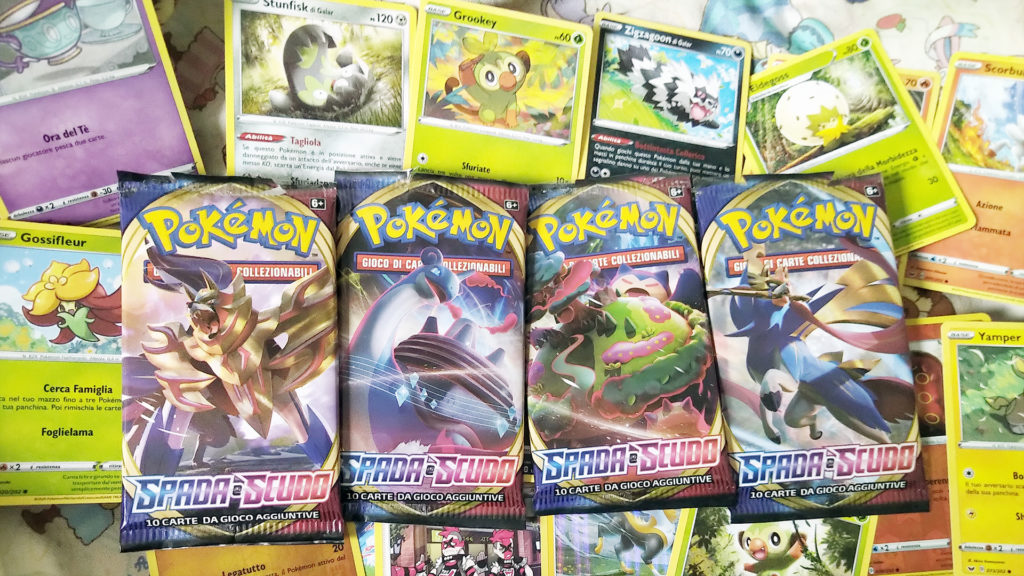 Among other cards, I found the three entire evolutionary lines of the 3 starters, which are not bad to aim and look at, and Ponita and Rapidash of Galar. A thumbs up also for the art of the bags, which you can see in the picture: Lapras VMAX is one of the most beautiful things ever seen so far.

Excellent conditions for the new Sword and Shield expansion of the GCC: we will see what will happen to the game in the next period.