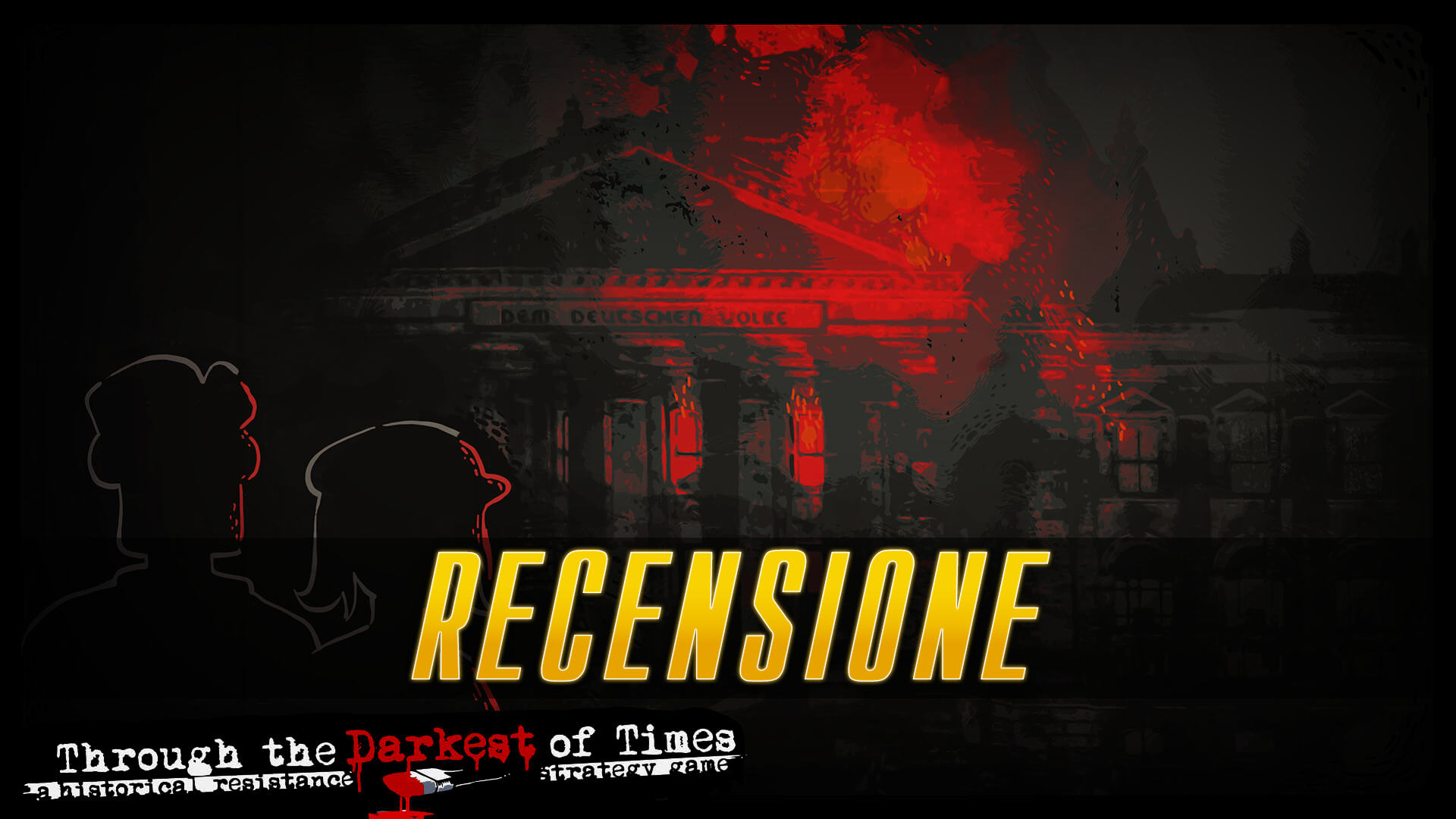 The small team Paintbucket Games debuts with a title of a certain ambition. Starting from Hitler's appointment as chancellor in 1933, the Berlin software house tries to retrace the history of resistance to Nazism until the end of the Second World War. As a minuscule group of rebels, our role consists in gathering consensus, allies, finances and spreading the truth about the atrocities of the party marked by the hooked cross. Once the necessary means to strengthen the resistance have been gathered, it will be time to counterattack, trying to sabotage the National Socialists in any way. Through the Darkest of Times tries not only to give a historical picture faithful, articulating the narrative with characters and facts that really happened, but also to create a small daily cross-section of the time, with a series of events and subplots to underline how terror, hatred and violence permeated every moment of the life of a German citizen, forced to face daily the Nazi dictatorial atrocities. Ludiculously, Through the Darkest of Times thrives on two very distinct souls, alternating visual novel sessions with other management sessions. The latter are crucial for the survival of the resistance group and a poor accuracy of resources and planning can lead to a premature game over. Starting from a quick creation of our alter-ego, the search for other comrades who can give lifeblood to our rebellion plans becomes immediately necessary. It is therefore good to try to form a heterogeneous group, in order to exploit the strengths of each member of the "party" based on the numerous statistics and peculiarities that each companion can boast. In fact, it is crucial for the success of each mission, even the simplest one, to select the most suitable person, being careful with the parameters concerning preparation and risk. Daring to start a mission with a very low preparation, for example, can lead to the arrest of one or more members of our team, who will be unable to participate in any other mission until their release or escape from prison by means of of an additional rescue mission. It was also decisive to know how to manage our finances and the morale of the group, as well as the supporters of our cause. To be honest, it must be specified that the title shows the side is ad a certain ease, especially once she has taken the hand with the management of the group, both ad a strong sense of repetitivenessdespite the game trying to create some obstacles and different types of missions. From time to time, especially in the most risky missions, we happen to come across unexpected events in the midst of our tasks: panic attacks, witnesses, quarrels between group members, police attacks or gestapo. These unexpected events can be faced in three different ways: by deciding to run away, hiding or facing the current problem with your head held high. In the first case, the mission fails but without negative consequences of any kind, while charging with your head down is a hazard that can lead to serious consequences but also to the total success of the mission. The middle way relegated to hiding instead is nothing more than this: a middle way. Unfortunately, even here the title does not manage to differentiate too much and the best choice is almost always to face the danger, regardless of what it is, given the very high success rate despite the premises. Overall, however, considering also the rather limited duration of the title, these sessions work and serve more as a glue between the various key events and events in the story than a real game device. 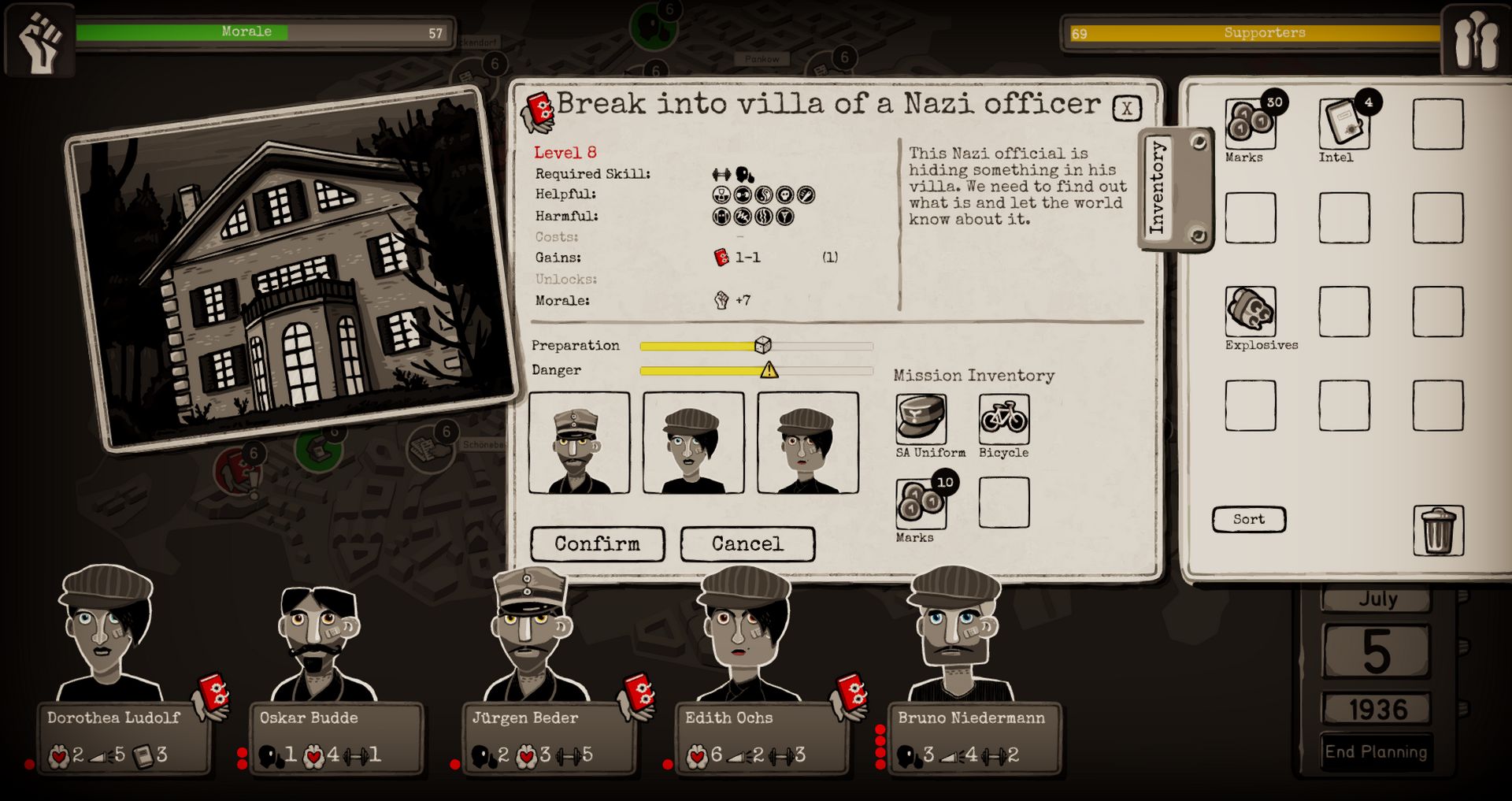 As previously specified, Through the Darkest of Times boasts a strong component visual novel, in which our alter-ego is the protagonist (or simply witness) of various situations used to outline the period in which the production takes place, emphasizing the senseless cruelty perpetrated by the Nazis and the direct consequences of the harsh climate of hatred and terror that served as the backdrop for one of the darkest pages in our history. This robe is the true strength of the title which effectively manages to describe different situations and deal with multiple topics, all related to the main topic of discussion but well implemented in its various facets. The cut of the narrative is raw but smooth and balanced. There is no attempt to sweeten the suffering of the victims, nor to make the story extremely partisan. Of course, the title is based on a very specific point of view and makes no discount to Hitler's madness (why should he, moreover?) But at the same time it is not a sterile invective flaked by the "politically correct", resulting in fact a effective means of deepening a topic that is often known only superficially.

The eldest son of Paintbucket Games proves to be an effective and appreciable title. Net of a certain simplicity in the game mechanics and a barely sufficient artistic sector, Through the Darkest of Times is a production that is not essential but still interesting. The quality of the writing and its fluency, however, combined with the presence of a more playful counterpart, makes the title very attractive to bring the younger ones closer to the history books, thus also boasting adidactic soul which is absolutely not to be underestimated.