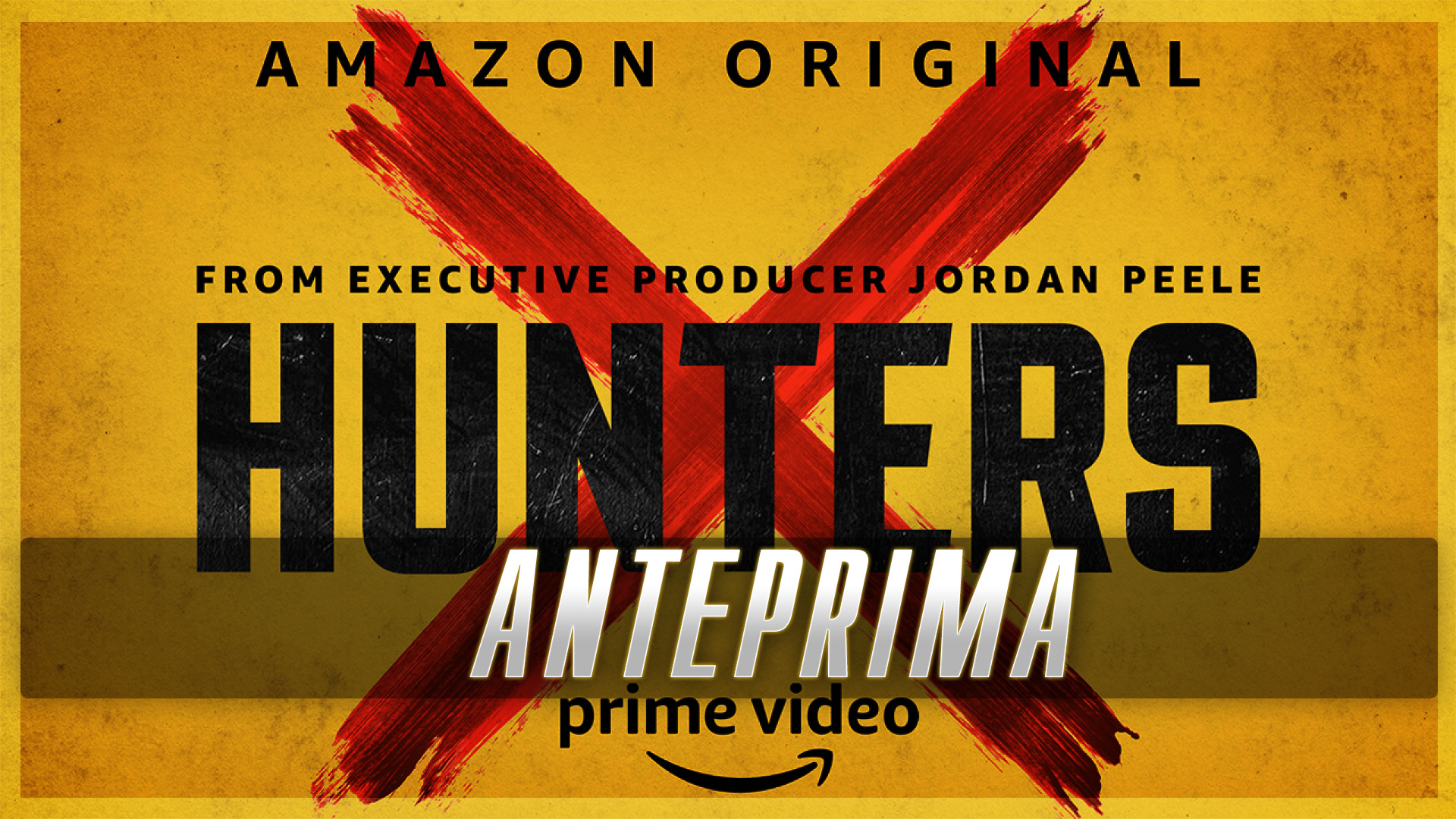 This week I got to watch the first two episodes of Hunters: the new flagship series of Amazon Prime, produced in collaboration with Monkeypaw Productions, manufacturer founded by the acclaimed Jordan Peele, and arriving on the platform on February 21st.

The first scene opens up Biff (Dylan Baker), host to a poolside barbecue, who boasts with his guests how informal he is with his boss Jimmy (Carter, the 39th President of the United States), and the overall picture is a condensation of stereotypes about America red white and blue. Everything went smoothly until the arrival of a young employee and his wife, who upon entering the garden caught the predictable sexist jokes of the landlord, then grabbed the pendant with the star of David that he wore around his neck and remained paralyzed. Not for casual sexism - so little was enough could not leave the house in 1976 - but because it is not his first meeting with Biff: between sobs and stammers he manages to spell one word: "Butcher". The woman recognized the director of the extermination camp where she had been deported to the Secretary of State. Biff tries to dismiss the accusations and calls the poor hysterical woman before retrieving a gun hidden under the grill and killing those present, including his wife and three children. At this point he turns to the Jewess, the only one left standing after the carnage, and, without his annoying American accent anymore, he indulges in a Nazi delusion by looking straight into the car, before shooting her in the head.

After the opening credits, he is introduced to us Jonah (Logan Lerman), the true protagonist of Hunters, a nerdy Jewish boy and drug dealer out of necessity. He got caught up in a one-sided fight with a bully (shot a lot, but a lot worse than the initial scene), he goes home to be scolded by his grandmother, and to jerk a little. While on the bed, she hears her grandmother shouting "you can't hide" to a masked figure before she kills her in cold blood. At the funeral Jonah meets Meyer Offerman (Al Pacino), friend of her grandmother and survived with her at the Nazi concentration camps. It is soon discovered that a clandestine war is underway between the Nazis who have found refuge in America and a group of "hunters" led by Meyer. 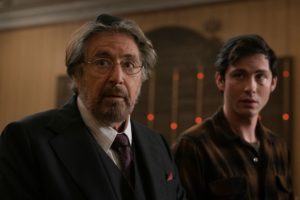 As seen so far Hunters certainly has strengths but the end result leaves mixed impressionsespecially on the intent of the authors (no, I'm not accusing anyone of being pro-Nazi). The technical aspects attest to the standards to which we are accustomed: the direction is quite essential, some sequences shine, especially the initial one, others are less convincing, but net of highs and lows theThe level is that of quality TV that we all expected from a top production. The scenography is already more interesting, and the use of the color of some backgrounds to give more strength to the staging. The editing in some sequences does not manage to mask the shots that fail, but the action itself is not the centerpiece of the series (at least for now), and here too there are ups and downs. The photography in the flashbacks set in the fields is much less somber and didactic than one would expect, difficult to say if it is a bonus or not. 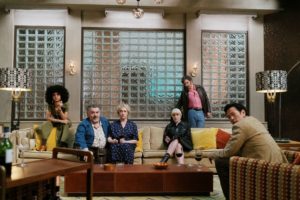 The performances are solid with some excellences: Al Pacino is always a great actor, but Dylan Baker triumphs over all, already consecrated for the role of the pedophile in Happiness, e who with Hunters can also add the Nazi hierarch to the list of his masterful interpretations. The protagonist is understandably subdued compared to the two giants that surround him, but he is convincing enough. Excellent supporting actors (above all Carol Kane, Saul Rubinek and Louis Ozawa Changchien), except Josh Radnor who has stopped even pretending to be an actor. The non-protagonist hunters are sketched at the moment, and only time will tell us if they will be forever relegated to specks or if writing will be able to convey the talent of the interpreters. The Nazi henchmen, on the other hand, are completely over the top, if we may say so, but they reflect the ideology they carry on. The only one who seems more peaceful is the character of Greg Austin, a sort of Mr. Wolf nazi who for the fourth reich is willing to clean up crime scenes, like to be photographed while having sex with old Republican senators to blackmail them. It is also the villain with the highest screen time, as well as being a major source of Nazi cringe of the series: his interactions with people seem to be traced from the comments on / pol / (the 4chan board dedicated to National Socialist memes) to the photo of an interracial couple. 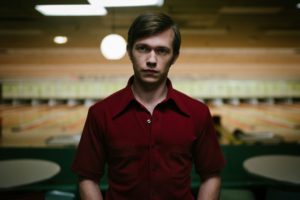 The biggest unknown of the series at the moment, as mentioned before, remains the intent of the authors and whether this has actually managed to take shape in the work. It is early to expect something well defined, but the feeling after these two hours is that the show has an identity problem, and that he is unable to choose a consistent tone with which to deal with the subject matter, and consequently Hunters bounces between Schindler's list and Wolfenstein. Writing is not particularly subtle, and if this can be interpreted as a parody of Nazism where it is applicable, the same reasoning cannot apply to everything else. Jonah is poor, so poor that he must peddle, and when his grandmother tells him that he shouldn't peddle he replies that they are poor and this is the only way they have to eat every night; Jonah receives letters from various prestigious universities but cannot go because he is poor and must take care of his poor grandmother because they are poor. One can believe the intentionality of scenes in which a Nazi, staring at a black girl intent on doing laundry in a laundromat, tells her "We must always separate the whites from the colored ones", but not the rest. Not to the homosexual colored policewoman who tells her companion the tale of Hansel and Gretel, transforming it into an ante litteram manifesto of Hitler's youth. 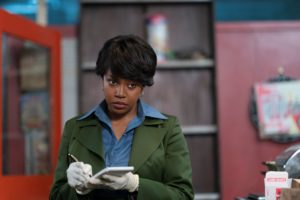 It is difficult to say how much we aim in all this, how much the show wants to deconstruct the Nazi-fascist aesthetic and how much to use it to be edgy and current, while not really touching (at least for now) the hottest issues and the most obvious contradictions in society American. Moreover, these are criticisms made at the time also to Mel Brooks' wonderful The Producers, which to date remains one of the most pungent and sagacious satires ever made on Nazism, and especially on the spectators of Nazism. Here too, the show is by no means subtle, but the sense of frustration in the face of the institution's inaction is real. A very possible interpretation of the continual vomiting of rhetoric that strikes the viewer is "What else do you need to understand who these people are?" For years, political discourse has continued to diminish and justify blatant examples of Nazi-fascist rhetoric, so much so that there is no longer even a need to dress her up. Hunters was born in a historical context in which even the flesh and blood Nazis no longer need to hide, and in this sense perfectly captures the spirit of the time.

Sonic 2, Idris Elba will voice Knuckles in the sequel film