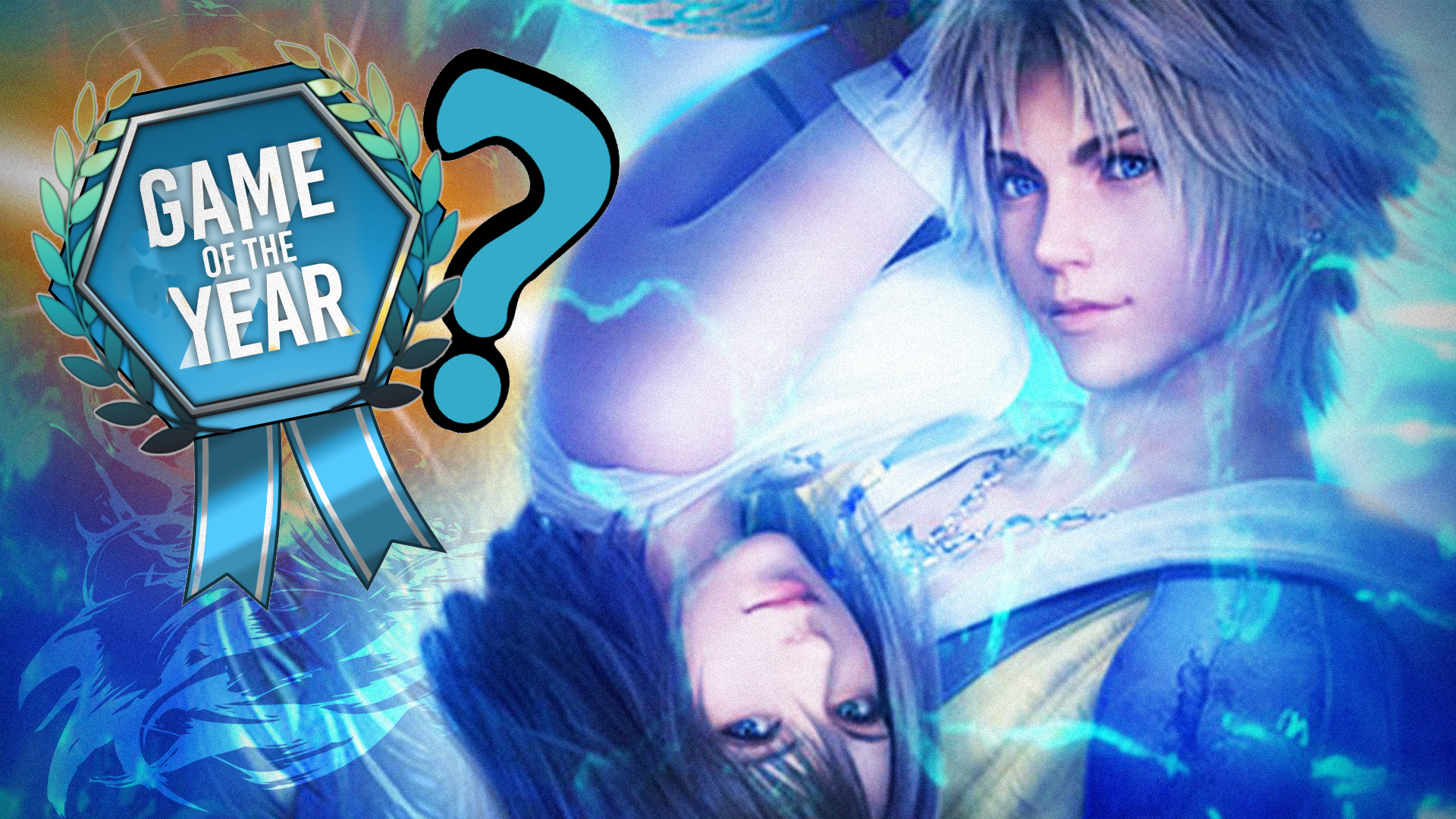 Almost a week after the flame caused by my colleague, here is what it wants to be a personal analysis, not technical, but anthropological and social. Why is Final Fantasy X considered by the Japanese, and not only, the best title of the saga? Follow me and you will find out.

Ishindenshin, or the importance of knowing how to read the air

"Listen to my story ... maybe this is the last chance." These are the first words we hear as soon as we start the game. Words accompanied by the wonderful "To Zanarkand" which still makes the hearts of many gamers beat. It is not only these two elements that strike, but the whole scene: in fact, we find an extremely heterogeneous group of people resting in front of a bonfire, all of them have a tired and tried look, nobody seems to be the invincible hero of many other videogame works . One of them gets up and puts his hand on the shoulder of one of his travel companions, as if to comfort her. Nobody talks. The boy walks away and, peering at the horizon, says one of the most iconic phrases of the saga: "" Listen to my story ... maybe this is the last chance. " 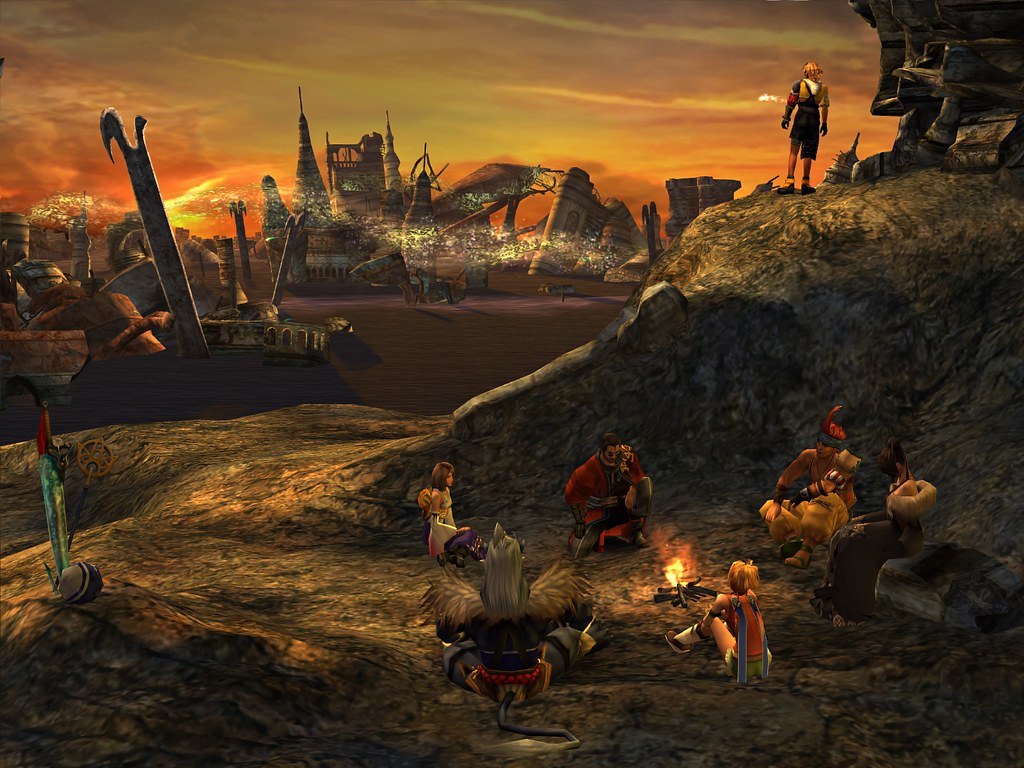 If Final Fantasy VI, VII, VIII and IX started throwing us headlong into the action thanks to their intro or the first minutes of gameplay, here the cards on the table are completely reversed. The beginning is slow, introspective and very Japanese. Why Japanese will you say? Because that silence, that hand on the shoulder without saying anything, can be enclosed in a single concept: Ishindenshinliterally "transmit to the heart". This term indicates one of the bases of Japanese communication, the non-verbal one. It may seem absurd to those who do not know Japanese society, but an extremely important thing is to know how to communicate only with looks, with gestures. Why words are not always important, sometimes you have to know how to read the air. Now are you starting to understand why Final Fantasy X entered the heart of Japanese video gamers?

The central theme of the game is undoubtedly the journey, not a journey towards a reward, not a great adventure for glory and honor, but dictated by a sense of duty. A pilgrimage from which, perhaps, the protagonists will never return, and they know it perfectly. If in Let's talk written by our Riccardo the linearity of the game progression is cited as a defect, I feel compelled to contradict it: linearity is fundamental in this story. The characters are driven by too high a reason to get lost in exploring the world far and wide. They cannot afford to look back or linger, it is not allowed. And this the player must feel on his own skin. It is not a huge map that gives a sense of immersion (see Final Fantasy XV and its huge but empty game world), but what those places represent for the characters, as each step allows our heroes to grow. Sin must be defeated, every thought, dialogue, action revolves around this. And you, gamer, must feel its weight.

The previously mentioned group seen at the beginning of the game is slowly introduced to Tidus, the protagonist. A different protagonist from the usual ones we were used to, so sure of their actions and what to do. The blitzball champion wants to go home, but most of the time he doesn't understand what's going on around him. Who could have the situation in hand once thrown into a world completely different from his? Nobody.

The scene where Tidus bursts into forced laughter is often cited, but many people seem to have not understood the true meaning of that extremely important moment in the game. The boy (because let's remember, we are talking about a boy) has just discovered that his father who has disappeared for years has not died as he thought but, just like him, he was catapulted onto Spira. Here, after sacrificing himself to save his travel companions Braska and Auron, he becomes Sin's new container.

Tidus knows that to finish his mission he will have to kill his father, or what is left of it, but he won't let anyone weigh it. For this reason, when Yuna sees him sad and encourages him to smile in the face of pain, he bursts into an exaggerated, unnatural laugh. It might turn out to be a ridiculous scene, but that laughter hides all the pain and confusion of the protagonist, a pain that, as mentioned earlier by Yuna herself, must not burden others. 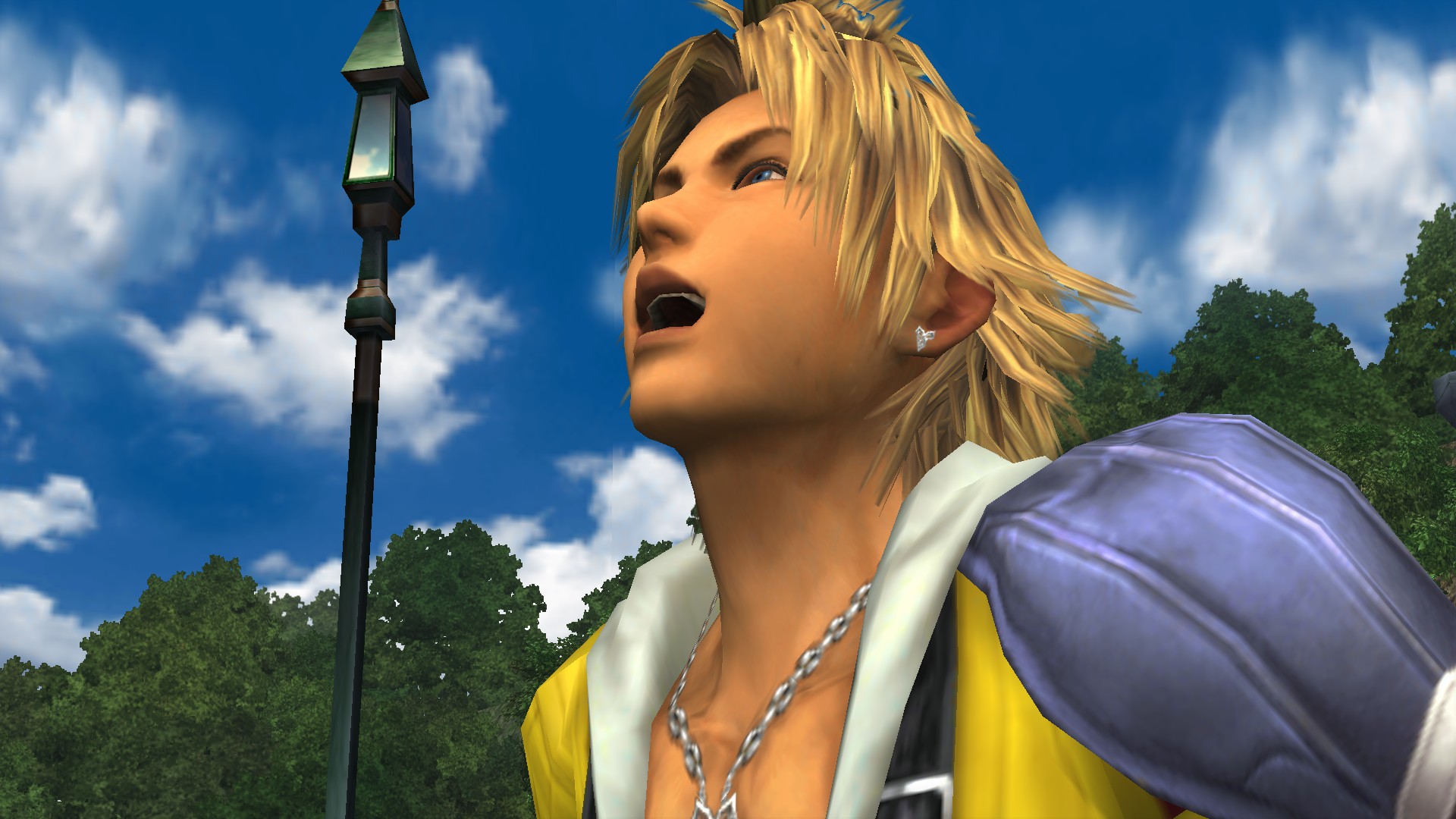 It is the concept of Kijo, il contain the pain so as not to burden those who are probably fighting another personal battle. This form of altruism, so far from the western way of putting the self in front of everything, is also visible in the other components of the game party: Yuna first of all knows that her life is devoted exclusively to the good of the community and that, for defeating Sin will have to sacrifice his life, but he never complains about it. Rather, her sweet and gentle attitude towards everyone makes her the strongest character in the entire game. Auron, marked by the disappearance of his friends, knows perfectly well that he will have to face his travel companion lost years before, but remains stoic. This is his mission, regrets cannot take over.

Wakka and Lulu are the two sides of the same coin, both representing the reaction that could be had in front of the loss of a loved one. If the lively Blitzball player faces his brother's death by showing lightheartedness and often being a fool, Lulu closes in on herself after the loss of her partner. However, one thing is shared by the whole team: no one makes others feel their pain. This, the Japanese who is playing Final Fantasy X to let off steam from those worries that he has never been able to externalize, understands it perfectly.

Closely linked to the concept just mentioned, but worthy of a paragraph in itself, we find another fundamental pillar for Japanese society: sacrifice. Yuna, as already said, is well aware of her destiny, and is ready to face it for the good of her people. He knows that the love affair with Tidus, however pure, will never have a happy ending. She's not the only one who has to sacrifice herself on this trip, the whole company will have to give up something, for example the young Riku, despite hostilities towards the cult of Yevon and therefore, indirectly, towards the choices of Yuna, decides to put them aside to help her, because she understands the weight of her mission.

However, in the end, the greatest sacrifice is made by Tidus himself. Once Yu Yevon has been defeated within Sin, the intercessors he created can cease to "dream" the Zanarkand from which our hero comes, and finally find rest. However, this will also make our protagonist disappear, as he himself is nothing more than a dream. So the boy who at the beginning of the journey appears carefree and immature, at the end of the adventure sacrifices his existence for the salvation of a world that doesn't even belong to him, but that is the home of the people he has learned to love. So, after a heartbreaking hug to Yuna, Tidus leaps into the void, rejoining his father.

In the final scene, Yuna gives a speech to hundreds of people, ending it with a message, in my opinion, extremely Japanese:

"We have all lost something precious ... Home, dreams, friends ... But now Sin is finally dead! Spira is ours again! By joining forces, we will have a new home ... and new dreams. The journey will be tough, but we have time: together we will rebuild Spira! The road awaits us. We begin to follow it from today. One last thing: the lost companions ... The dreams gone ... Let's never forget them. "

Why extremely Japanese? Because these words contain the spirit of a country that has undergone a forced modernization by the Americans in the mid-800s, two atomic bombings and, more recently, a nuclear disaster, but which he has always found the strength to get up with dignity, remembering what he has lost but without crying over himself. 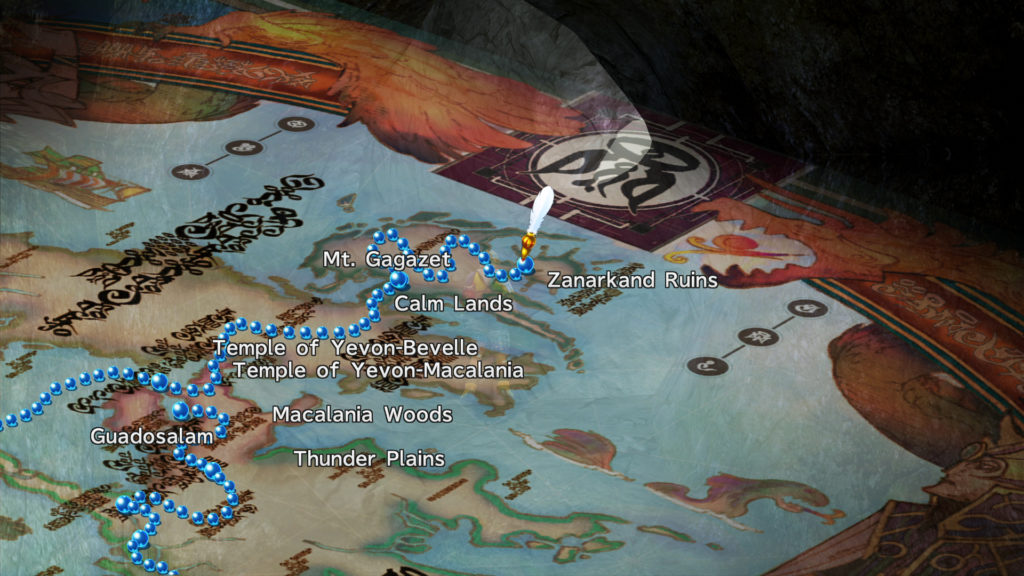 The map is certainly linear, but each place visited represents a fundamental step for the characters 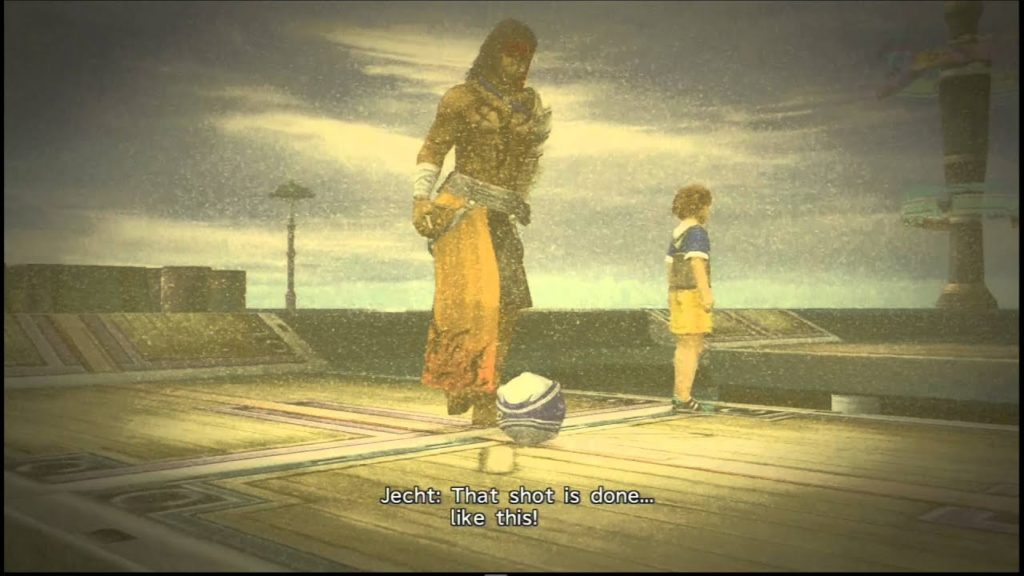 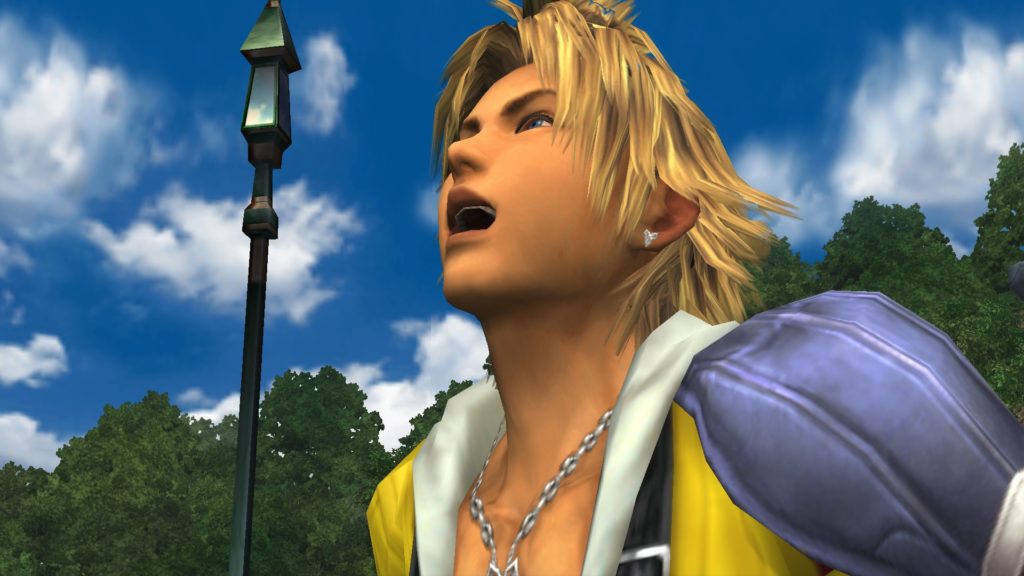 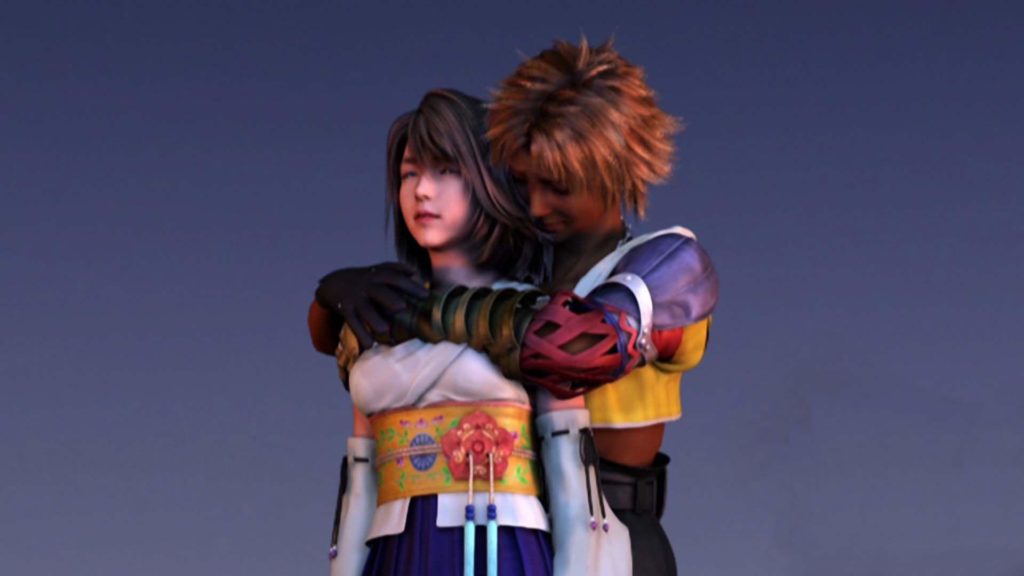 I see you are crying, don't be ashamed 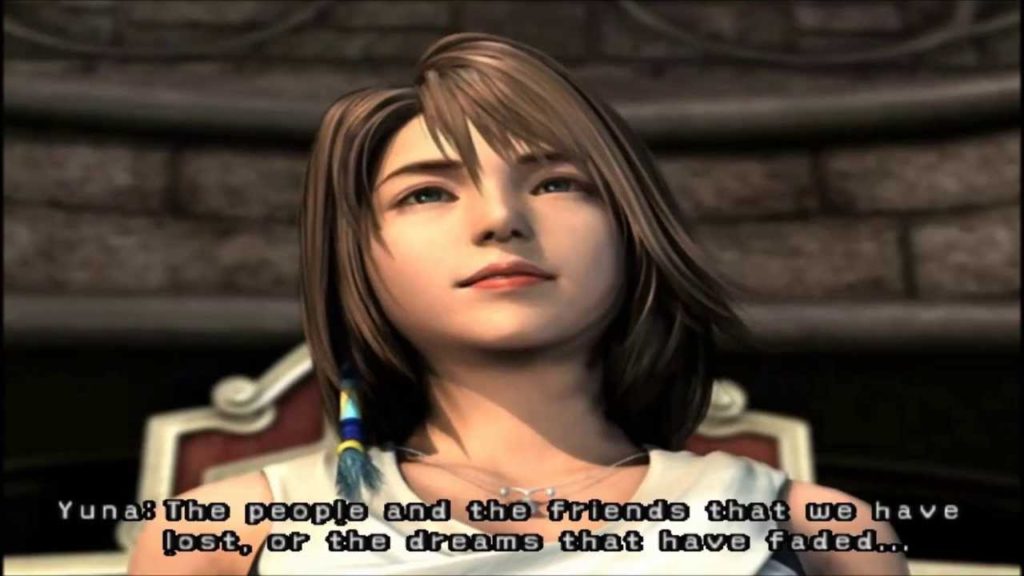 Pokémon Go, a bit of clarity