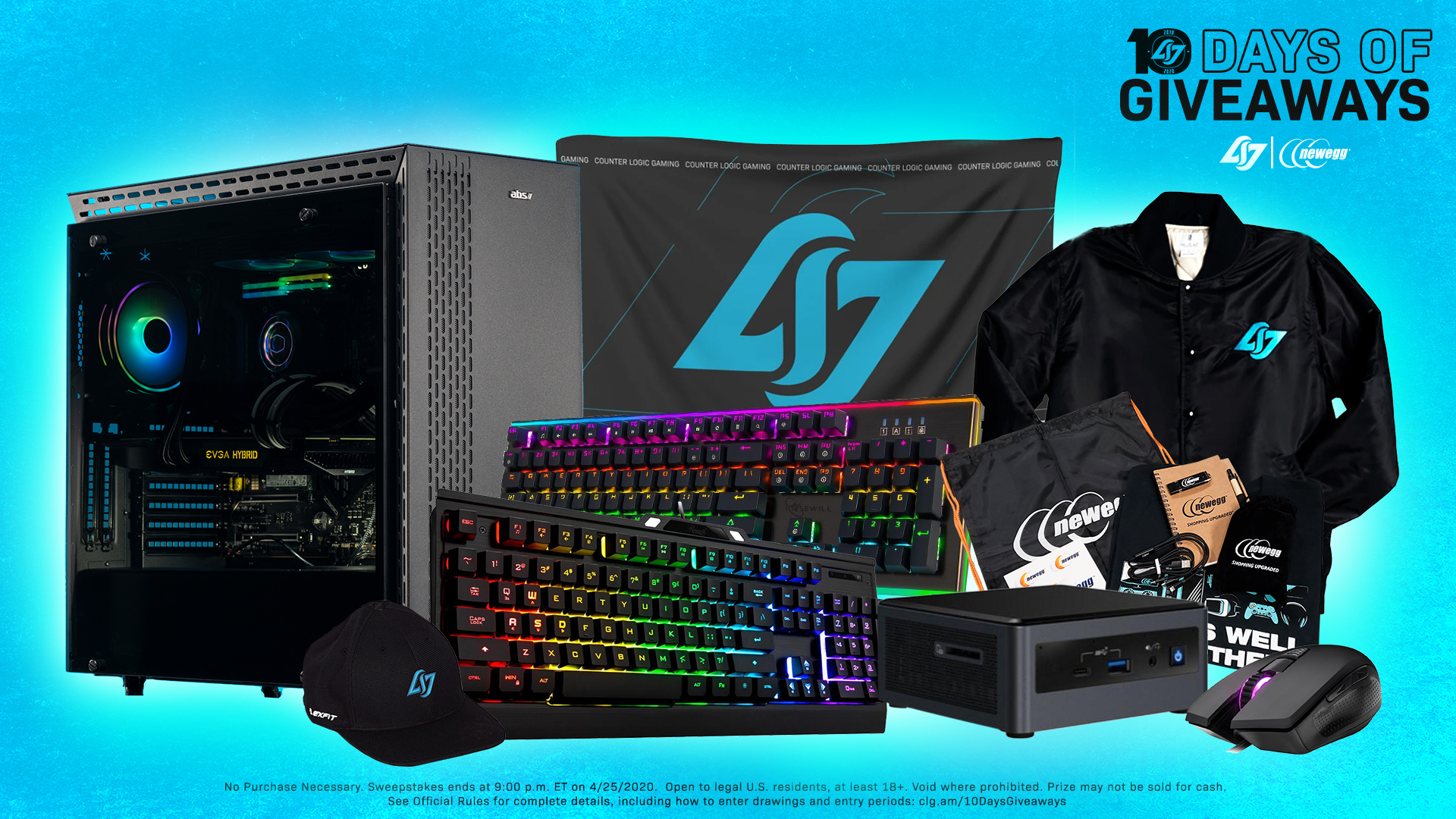 LOS ANGELES– (BUSINESS WIRE) -# CLG10—Newegg, one of the leading tech-focused e-retailers in North America, today announced a series of events and promotions to mark the 10th anniversary of its esports partner, Counter Logic Gaming (CLG). The extended celebration kicks off April 16 and concludes April 25.

"CLG continues to be a great partner to Newegg, as we share a deep connection to the esports movement," said Anthony Chow, Newegg's Global CEO. "We send our heartfelt congratulations to CLG on this important milestone, and we wish them continued success in the future."

On April 16, Newegg launches the CLG 10th Anniversary 10 Days of Giveaways promotion. The sweepstakes gives entrants a shot at winning HotshotGG's ABS Gaming Desktop - a custom-built grand prize valued at $ 3,200 *. George "HotshotGG" Georgallidis - the founder and co-owner of Counter Logic Gaming - is widely known throughout the esports world not just for his role at CLG, but for his involvement in the broader esports movement. Other prizes include daily giveaways, including an Intel Frost Canyon NUC and assorted CLG gear. The sweepstakes runs through April 25 - visit https://www.newegg.com/clg for more information and to enter for a chance to win.

"Growing CLG over the course of 10 years has been a labor of love, requiring the collective effort of everyone in the CLG family, and key collaborators like Newegg who share our passion for esports," said Georgallidis. "Celebrating this milestone with Newegg is a great way to mark the occasion, and to set our sights on even greater accomplishments in the years ahead."

Watch Robeytech on Twitch at https://www.twitch.tv/robeytech to catch him live, building HotshotGG's PC on April 18, and missharvey's PC on April 25. Missharvey - CLG's Director of Esports Franchise Development and Outreach - is a five-time world champion in competitive Counter-Strike, and longtime female pro-gaming icon. The grand prize winner of HotshotGG's ABS Gaming Desktop will be revealed on Robeytech's April 25 livestream. Viewers of both livestreams will also have opportunities to win products from Cooler Master, Rosewill and Western Digital.

Following the sweepstakes' conclusion, a limited number of HotshotGG's ABS Gaming Desktops will be available for purchase on Newegg. Visit https://newegg.io/abs-hotshotgg for more information. Like Newegg on Facebook and follow Newegg on Twitter to stay up to date on the company's latest news.

* No Purchase Necessary. Sweepstakes ends at 9:00 pm ET on 4/25/2020. Open to legal US residents, at least 18+. See Official Rules for complete details, including how to enter drawings and entry periods: https://www.newegg.com/clg.

Newegg Inc. is the leading tech-focused e-retailer in North America, with a global reach in Europe, Asia Pacific, Latin America and the Middle East. Founded in 2001, the company offers its more than 40 million registered customers a comprehensive selection of the latest consumer electronics, entertainment, smart home and gaming products. Newegg is consistently ranked as one of the best online shopping destinations, and the company regularly earns industry-leading customer service ratings. Newegg is headquartered in City of Industry, California, with North American distribution facilities located throughout the United States and Canada. For more information, visit http://www.newegg.com.

CLG is a top tier North American esports organization respected for its championship legacy and passionate fanbase. CLG was originally founded in 2010 as a League of Legends team by George Georgallidis, with the intent of pushing the boundaries of esports and creating a thriving community around it. CLG is now one of the largest esports organizations in the world. CLG fields teams in all leading esports titles: League of Legends, Fortnite, Counter Strike: Global Offensive, Apex Legends and Super Smash Bros. In 2017, CLG partnered with the Madison Square Garden Company, allowing CLG to further disrupt and cement its legacy in esports history. CLG has won multiple championships throughout its history, most notable are the LCS Summer 2015 Championship at Madison Square Garden, the LCS Spring 2016 Championship at Mandalay Bay; and the Halo 2016 World Championship in Hollywood, California. More information is available at www.clg.gg

Razer Announces the Kaira Pro - The Ultimate Xbox and Cloud ...