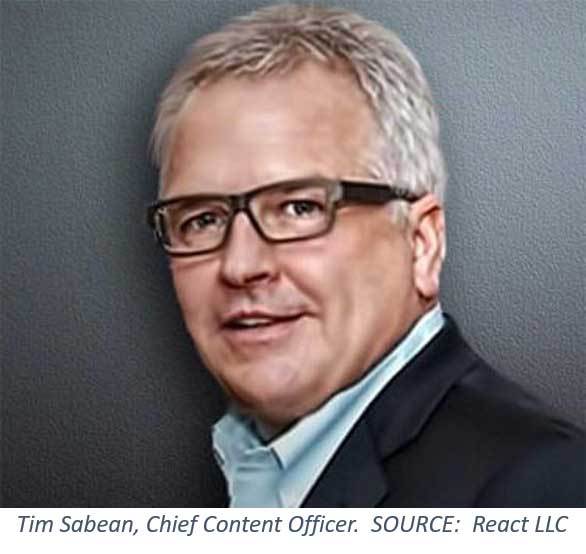 TAMPA, Fla .– (BUSINESS WIRE) -#biggergame–Tom Brady's move from the Northeast to Tampa Bay may have been more visible, but React, LLC ("React"), headquartered in the same market, has now drafted a second iconic leader to its' executive team, announcing today that Tim Sabean has officially been named Chief Content Officer.

Sabean is best known as the radio executive who guided the 20-year migration of Howard Stern from a fledgling 2-station shock jock, to a billion-dollar brand that drew millions to SiriusXM. Tim most recently moved into podcasting as SVP, Digital Content at Westwood One. His breadth of experience also includes VP roles overseeing programming at marquis rock stations including WYSP-FM / Philadelphia, WXRK-FM / New York, KLOS-FM / Los Angeles, WLS AM / FM Chicago, WKRK-FM / Detroit, and WJFK- FM Washington DC. Especially valuable to React's pro sports initiatives is Sabean's decade-long leadership while at CBS Sports Radio, where he built out the Philadelphia Eagles Radio Network.

Sabean's addition to the React team signals accelerated preparation for the launch of React's patented sync-to-broadcast mobile game show, Super Squares®. The company and app have attracted national buzz since the COVID-19 pandemic, two to the unique ability of the Super Squares® app to enable leagues and networks to entice millions of fans to watch repeat broadcasts of football, hockey and basketball games. By comparison, popular daily fantasy apps and TV network-based predictor apps have lost millions of game plays since mid-March, due to their complete reliance on live sports and wagering.

Today's announcement comes less than ten days after React enlisted former NFL player and Director of Football Development Matt Birk, as React's first Commissioner of Pro and ePro Sports. Along with Birk, Sabean will also be putting the finishing touches on "Project Splice ™," a secretive new form of reality sports entertainment that Commissioner Birk hints, "... will do for sports culture and real-time viewing, what hits like Survivor and American Idol did for prime-time TV twenty years ago. "

Sabean recalls, "I remember first hearing about the big idea behind React in 2018 - the idea that advertising could be gamified and adrenalized, to make the media model attractive to audiences. It was like an explosion in my mind; it made me realize that for my whole career, I've ignored the commercial breaks - and that's the revenue stream! Super Squares® proves that React thinks of advertising as a sport, and fans will eat it up - it's exciting, disruptive and revolutionary. No other media company has even come close to figuring this out yet! "

React CEO Frank Maggio tips the company's hand when discussing the caliber and timing of recent announcements. "Tim has proven time and again that he has the unique ability to create cultural phenomena around media personalities and platforms. Having his creative mind focused on the entire content stream - including sponsors and advertising - gives React an almost unfair advantage over other media companies. " Concludes May, "In these very competitive and challenging times, we will continue to add remarkable team members, and focus on connecting fans to brands in real time. Building leadership around professionals like Matt Birk and Tim Sabean demonstrates our commitment to winners and winning, and the brands, networks and leagues that partner with React and our fans will win, too. "

Founded by adtech and media measurement maverick Frank Maggio, React LLC is an experiential advertising technology and entertainment company that thinks of "advertising as a sport ™." By adrenalizing advertising ™, React excites audiences with rewarding, branded two-screen experiences during the most viewed and attended sporting and media events in the world. The company's commitment to "respect, protect, and reward attention" honors user privacy by never selling or sharing personally identifiable information. Details about React can be found at www.react.net, and Super Squares® details are available at www.SuperSquares.com.

British fugitive caught by police: he was going to buy the new ...

Piermatteo Bruno - March 8 2021
And now a little news story for you: Clint Butler, a fugitive who escaped last November from Buckinghamshire's Spring Hill prison is back ...
News

Piermatteo Bruno - March 8 2021
The Monster Hunter Digital Event has just ended and for the occasion Capcom has released more information on Monster Hunter Rise, starting with the new trailer ...