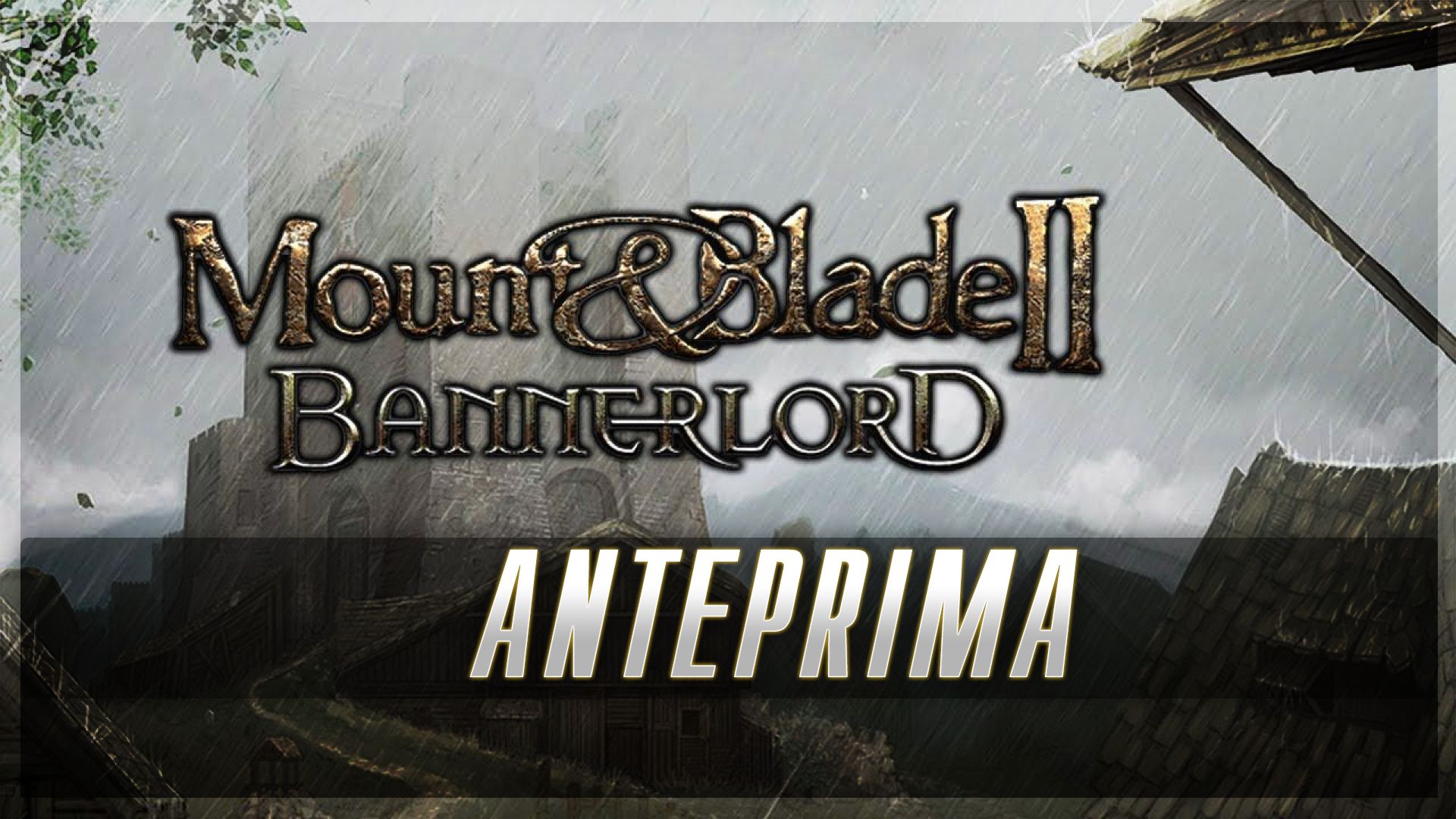 I had heard so much about Mount & Blade in my years as a gamer, the incredible medieval battle simulator, with infinite possibilities and thousands and thousands of mods. Partly out of boredom, partly because I was getting more and more in my hands, I have never had the chance to play it so far: so I took the ball with Mount & Blade II Bannerlord. Posted in early access to Steam from TaleWorlds Entertainments Entertainment after waiting for almost eight years, the new chapter of the series is already very well presented and allows players to dive back into those settings made of pitched battles, sieges and political intrigues that they love so much, albeit with some limitations. I approached the game as a novice, without reading anything and the first impact was quite negative. I wasn't sure what to do and how to move, but slowly the vast world of Calradia opened before my eyes and I was enraptured and fascinated by it. 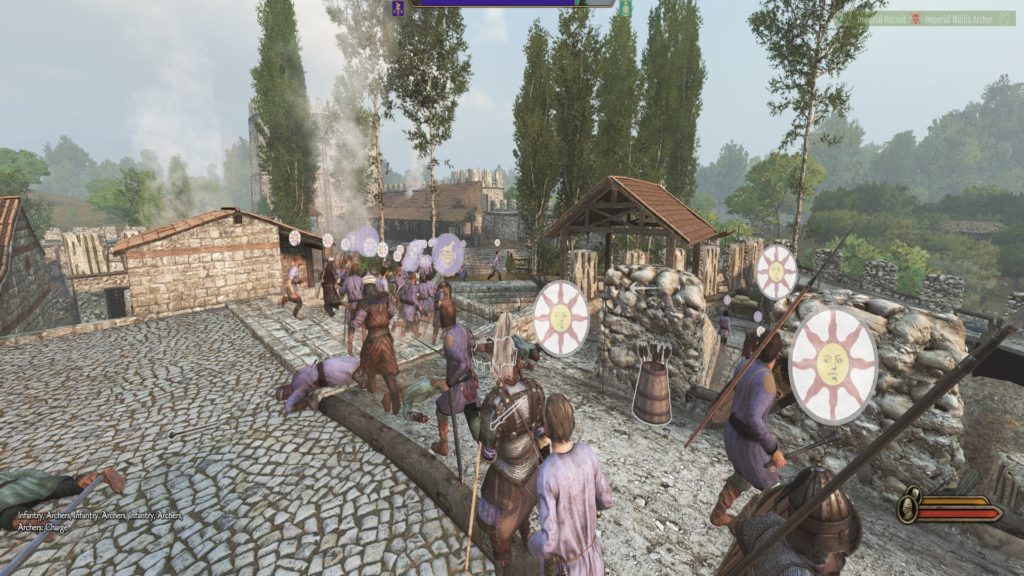 Going to harness Mount & Blade II Bannerlord within a specific game genre is difficult. We could call it a kind of management system with role-playing elements and real realistic simulations of medieval battles. So forget the character that devastates entire armies as in the musou, here with two well placed arrows you are already on the ground. The title opens with the creation of the protagonist and its background that changes the values ​​of the skill tree. In this case a system similar to that seen in the Elder Scrolls is used: the various abilities level up upon completion of the action they require. Soon after we move on to a quick tutorial that explains all the basics of combat with close range, long range and horseback weapons. Once the training is finished the exploratory phase, in which the bird's eye view shows the entire game map, with the various camps, castles and large cities. The system vaguely recalls that seen in Civilization (very far away) but in this case only the protagonist is controlled, whose task is to recreate the legendary Dragon Banner, a legendary banner. The initial missions are only an introduction to what is the true heart of the title. Once the banner has been recreated, we must make a decision: give it to one of the rulers and declare ourselves their vassals or keep it and create our kingdom. Here the first flaws begin. All the component related to the creation of your kingdom has not yet been introduced and developers, at this stage, advise against opting for this choice. The game, at the moment, does not have a real story or precise objectives: let's say that, to "win", you have to conquer the entire game map, to put it briefly, but basically everything is left to the player, given that the title proposes absolute freedom. I personally decided to swear an oath to the Southern Empire in order to help it grow. After joining a kingdom, another subsection of the game opens, in which we can propose more or less advantageous laws and acquire Reputation with the clashes, which we can spend to vote on the proposals of the other lords or to recall them to us, in order to create an army. Be careful when you swear an oath to someone: if the kingdom has declared war on another population, they automatically become your enemies too and you have to look after their armies and patrols that go around the map. 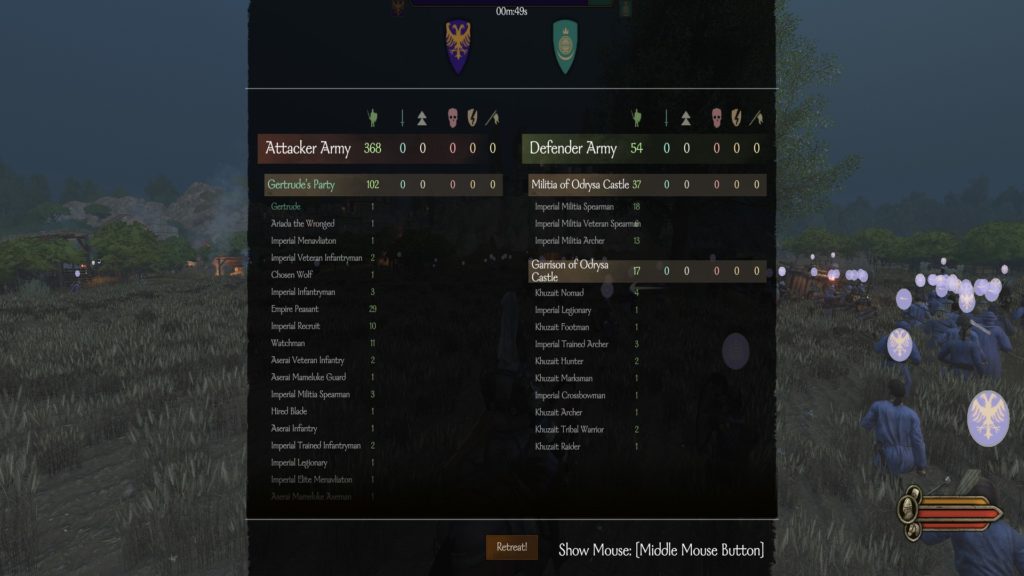 During the exploratory phase we can go to visit various outposts, within which it is possible recruit men for our company o exchange goods. The game has a dynamic market, consequently the prices of the various objects vary according to the purchases made by the various NPCs and by the caravans that move continuously. This could also go to our advantage: for example, if we plan to declare war on a kingdom we can go to its cities, buy all the food possible so that the internal garrison begins to lose men and then subsequently start a siege, but this after having accumulated men and hours of play. At first we must also fear the small companies of brigands who roam Calradia. As soon as we cross the road with enemies, the second phase of the game starts, the one I consider decidedly more fun: the battles! In addition to controlling our character, we also have the ability to issue orders to our troops, move them, put them on the defensive and set all the strategies necessary to achieve victory without losing too many men. At first, against small groups, it is enough to simply declare the charge, but it is in sieges or pitched battles against other lords that the game gives its best. In fact, we can soon find ourselves commanding even 1000 men, divided between cavalry, infantry and archers and we must position them quickly, evaluating the terrain, any obstacles and even the enemy formation. Not always a charge without restraint leads to victory, on the contrary. 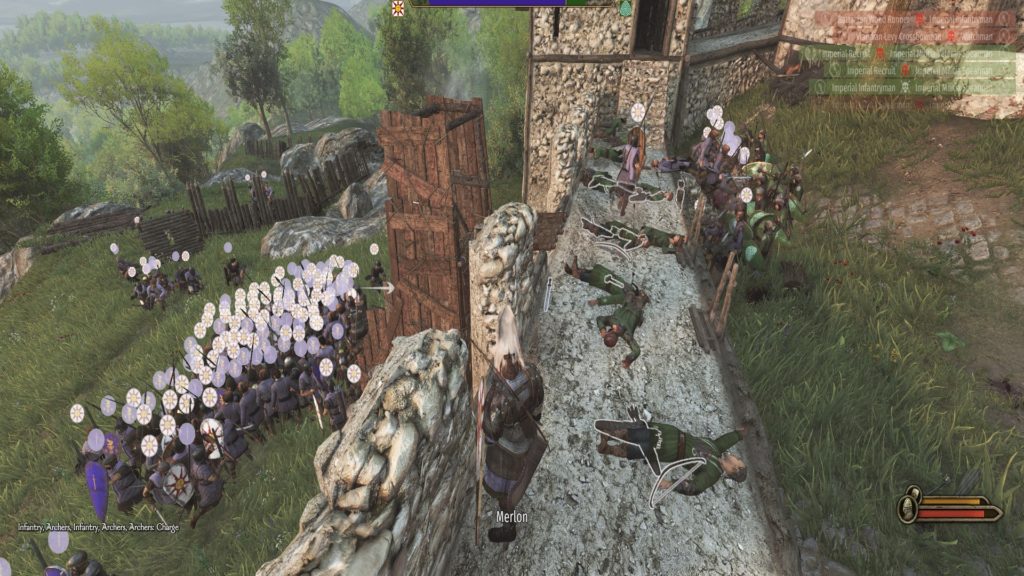 Not to mention the sieges, which are in turn divided into two phases. After declaring the attack on the castle or the city we have to build the camp and the war machines like onagers, rams, ballistae or mobile towers, automatic action that takes time and leaves our field uncovered to the attacks of the enemies. In fact, the NPCs do not stand by and watch: nothing prevents them from forming an army and coming to attack us. And also make sure that you have enough food in stock, otherwise desertions are a beauty. Once everything is organized, we can start the attack. Again we can issue orders but I think at the moment it is better to let the AI ​​do it. Our soldiers in fact advance together with the mobile towers or the ram that we previously built and begin autonomously to assault the enemy walls, even with the use of stairs. Sure, every now and then their intelligence limps slightly and it's not uncommon to see them piled together at the base of the walls as they are covered by enemy arrows, but I must say that TaleWorlds is doing a really good job in the overall improvement of the title. Literally every day a new hotfix comes out and the game is beautifully also supported by the community, which is already filling the pages of NexusMods with hundreds and hundreds of different mods. The release of the game is scheduled for 2021 also forwarded on consoles and, given the trend, the situation seems more than positive.

Lorenzo Damiano - July 14 2020
We are now very close to the release date of Ghost of Tsushima, the expected return of Sucker Punch Productions, set for July 17th ...
News

Lorenzo Damiano - July 14 2020
Deadly Premonition 2, the well-known sequel developed by TOYBOX and created by Hidetaka 'Swery' Suehiro, has recently arrived on Nintendo Switch. How do we ...