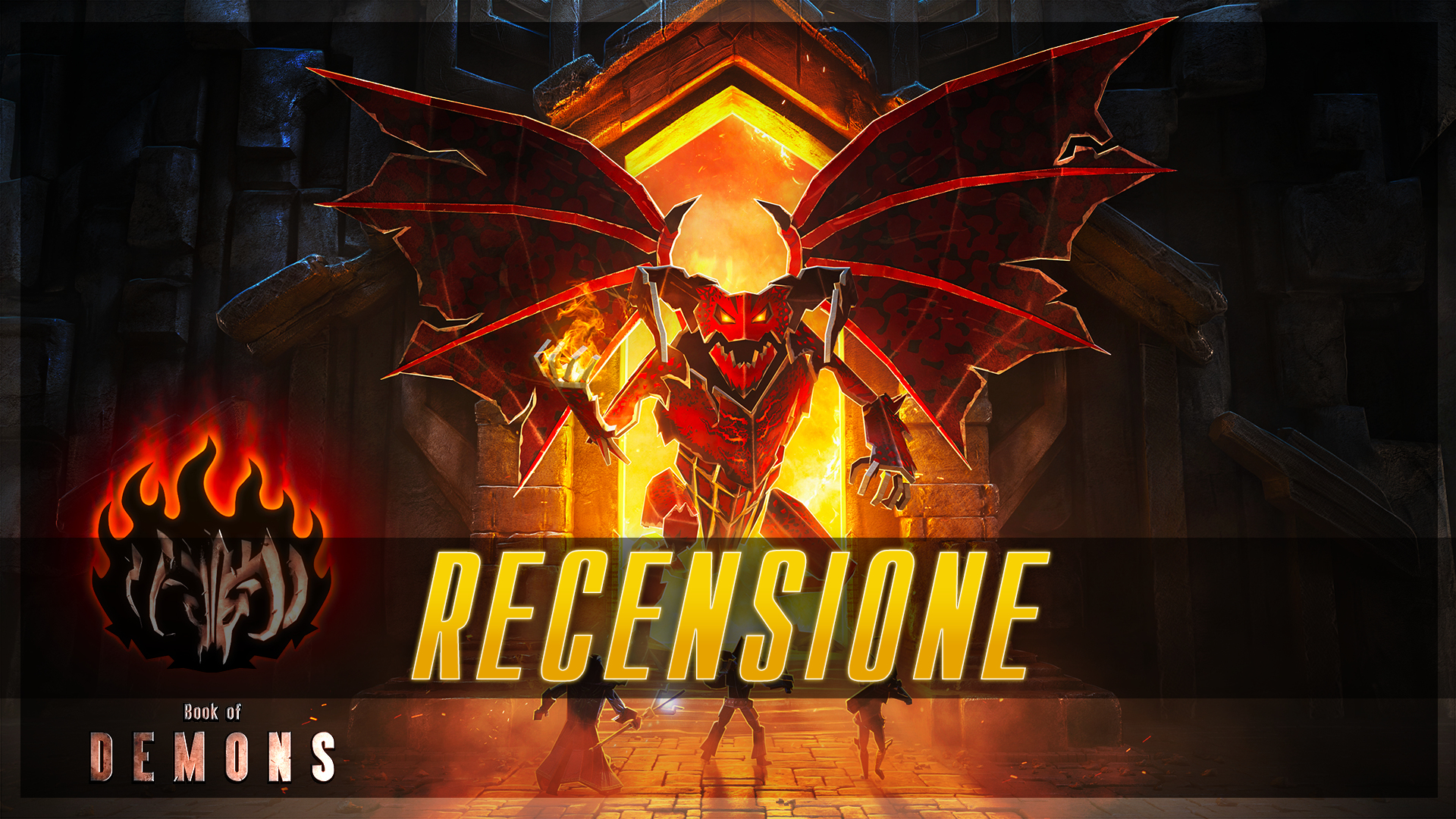 What would happen if we unite a hack n 'slash Diablo-like with the graphic style of a Paper Mario? Although this is a question that probably few have asked, the guys of the independent team Thing Trunk, supported by 505 Games, they tried to give their answer with Book of Demons, a truly peculiar title released at the end of 2018 on PC, and now also brought to Nintendo Switch.

The game in its settings, in the story, and in the enemies, does not even try to avoid the citation to the historical brand Blizzardindeed, it often makes it one of its key points. However, besides being a tribute to the legendary Diablo, Book of Demons also represents a more than valid one parody, and the easy-going humor that reigns through all the characters and situations at stake, goes perfectly with style paper with which it is represented in the complex. 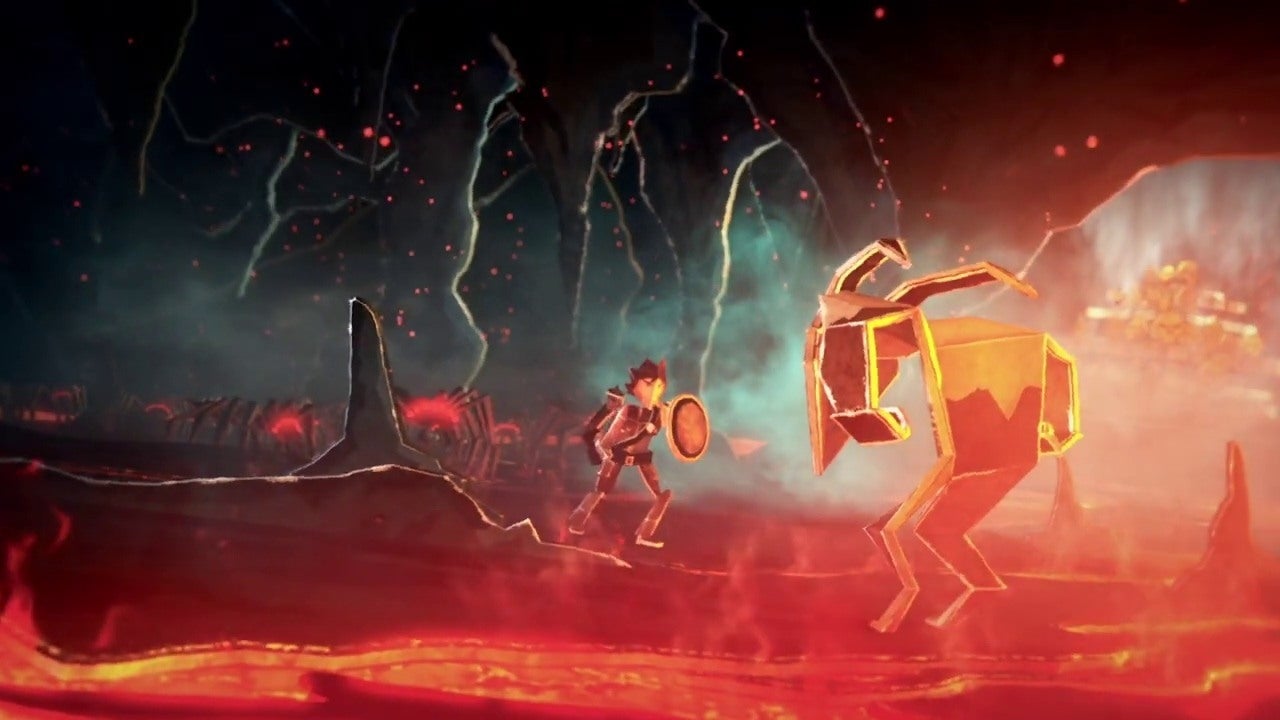 Our adventure begins with the choice of the character class: warrior, thief or magician, with the first as the only option at the beginning, but the other two will be easily unlocked after twenty minutes of play. Without giving us too many frills or explanations, the game catapults us into the catacombs infested with monsters under the village church, where needless to say, a big red demon at the end of the path.

In perfect style dungeon crawler, our goal is therefore to go down through the different floors of the basements by cleaning all the rooms of paper monsters of different types: zombies, skeletons, spiders, ghosts and so on, until you get to the boss in turn, who once knocked down unlocks the next section of levels.

Generally exploration at the bottom of the plans of a dungeon is a very important point in the titles of this genre, however it pains me to say that in Book of Demons this factor is practically zeroed. Our character indeed it is not free to move through the scenario in the directions we prefer, but is forced to follow the corridors preset in style board game. This movement on the tracks also often makes it impossible to dodge enemy attacks and the most fragile characters or without too many area attacks such as the thief, could be forced to take several damage without escape in the event of encirclement by monsters, especially seen and considered that the latter class cannot even shoot arrows if the enemies get too close. 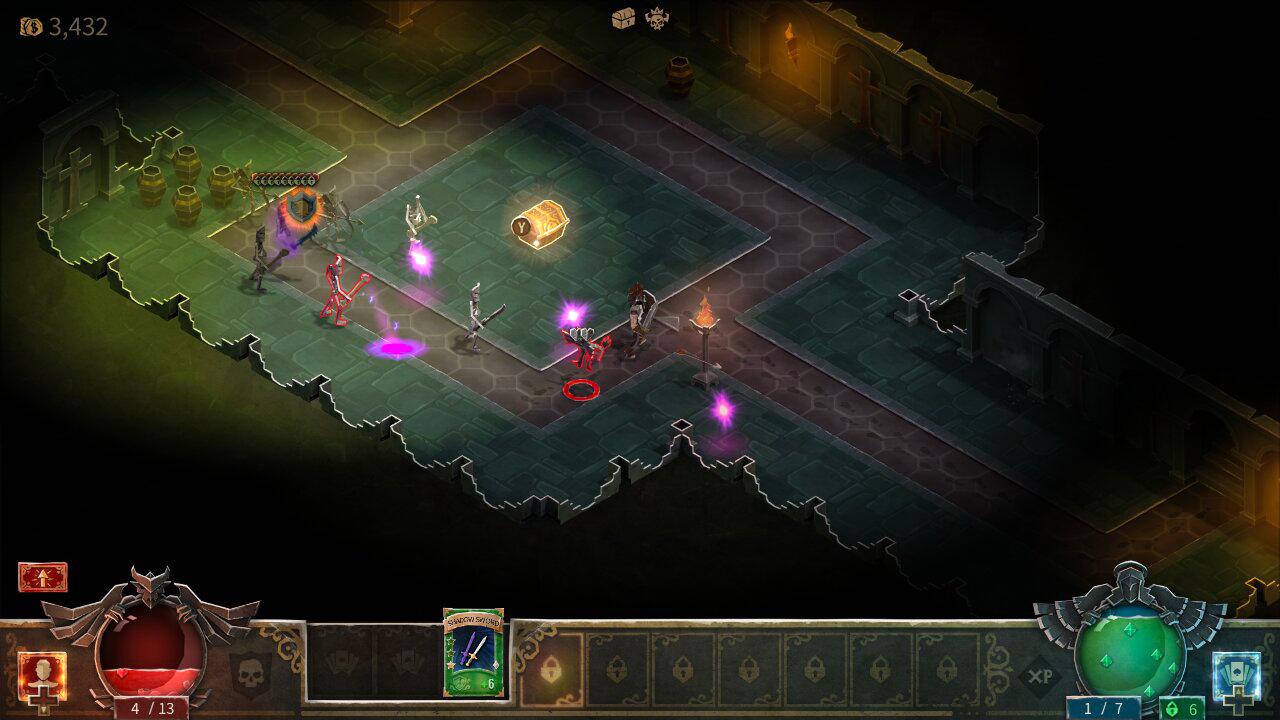 In addition to the linearity of exploration, the other great flaw of this porting of Book of Demons (and not of the game in general therefore) is the control system chosen by console developers. Instead of the classic click on the enemies to set the target, in fact, it is necessary to aim the latter through the right analog stick. However, moving the cursor over the various enemies with the stick is significantly more slow and often too cumbersome and in the most agitated situations it could also lead to a confusion of the player in the choice of priority targets, since basically the character attacks the unit closest to it by default. Even navigating the menus is not very easy since it is possible to open them more together (for example, inventory and shop at the same time) and equipping different objects or spells may not be so immediate, especially if there is a need to change them quickly during a fight. 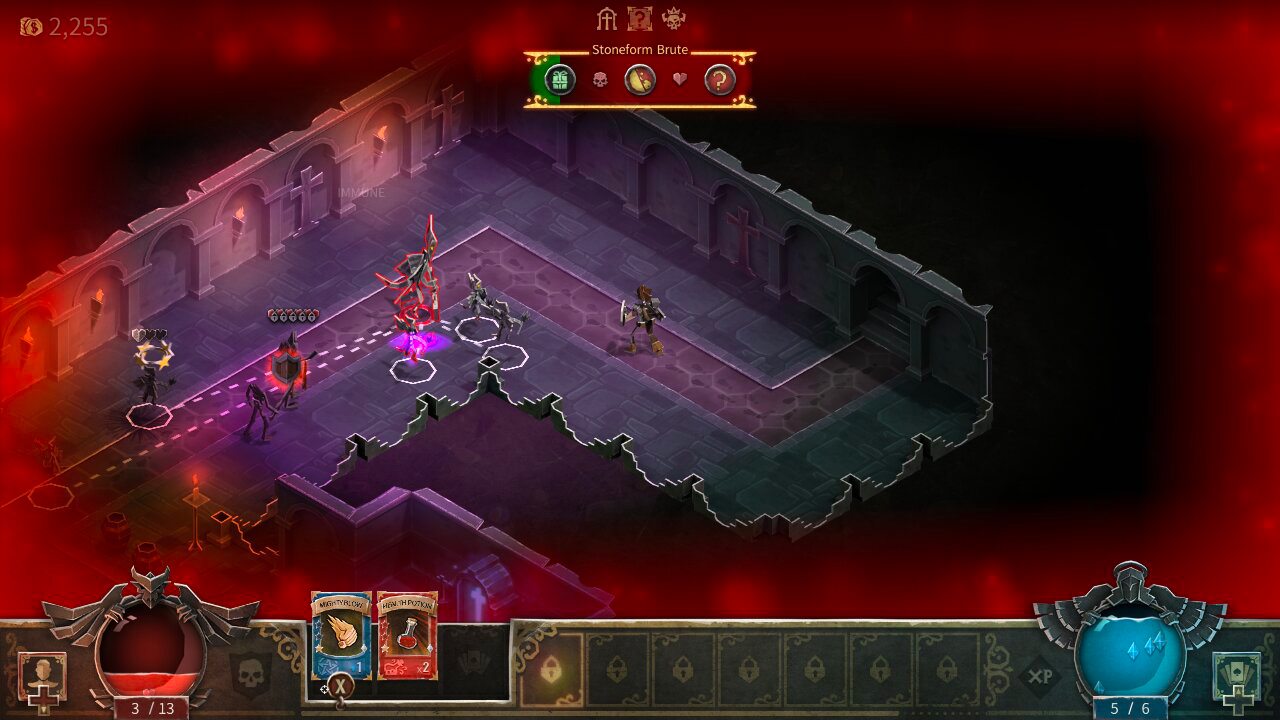 Book of Demons however it shows its muscles in what are the peculiarities of this title, which distinguish it from others of the same genus. Among these, first of all we find the fulcrum of the system combat of the game, which represents equipment and spells in the form of carte. Let it be clear however that this it is not a card game, but a hack n'slash, and therefore the cards and the "deck building”They represent only an alternative system of representing artifacts and magic, while the gameplay remains anchored to the classic plus component action such. As anticipated, the cards are divided in magic, artifacts e Consumable (the classic potions), which can be equipped in limited but expandable slots during the course of our adventure. Choosing carefully the cards to equip in each situation is therefore the key to success in Book of Demons, as only those available in the quick selection can be used in combat. All cards are also available in different rarity and obviously the higher the latter, up to the legendary degree, the more the additional effects are compared to the base municipality. Last but not least, in the dungeons there is the possibility of finding some rune that the fortune teller of the city can infuse into our equipment, further enhancing the various cards available to us.

The other feature that most surprises in Book of Demons it is without a doubt the very original Flexiscope, unlocked after completing the first tutorial levels. This peculiar tool allows the player to select the in advance duration plans in the next section of levels, in order to calibrate the experience based on the time we have in that game session. For example, if we are on the train with our beloved Nintendo Switch and we know that the destination will arrive in half an hour we can set that duration in the Flexiscope, and the game will automatically calculate dungeons that can be completed in that time frame. The curiosity of this system is that the latter evolve over time depending on our style of play. The Flexiocope in fact detects the average time that the player takes to complete certain sections, and therefore evolves his creation of plans according to our style of play. 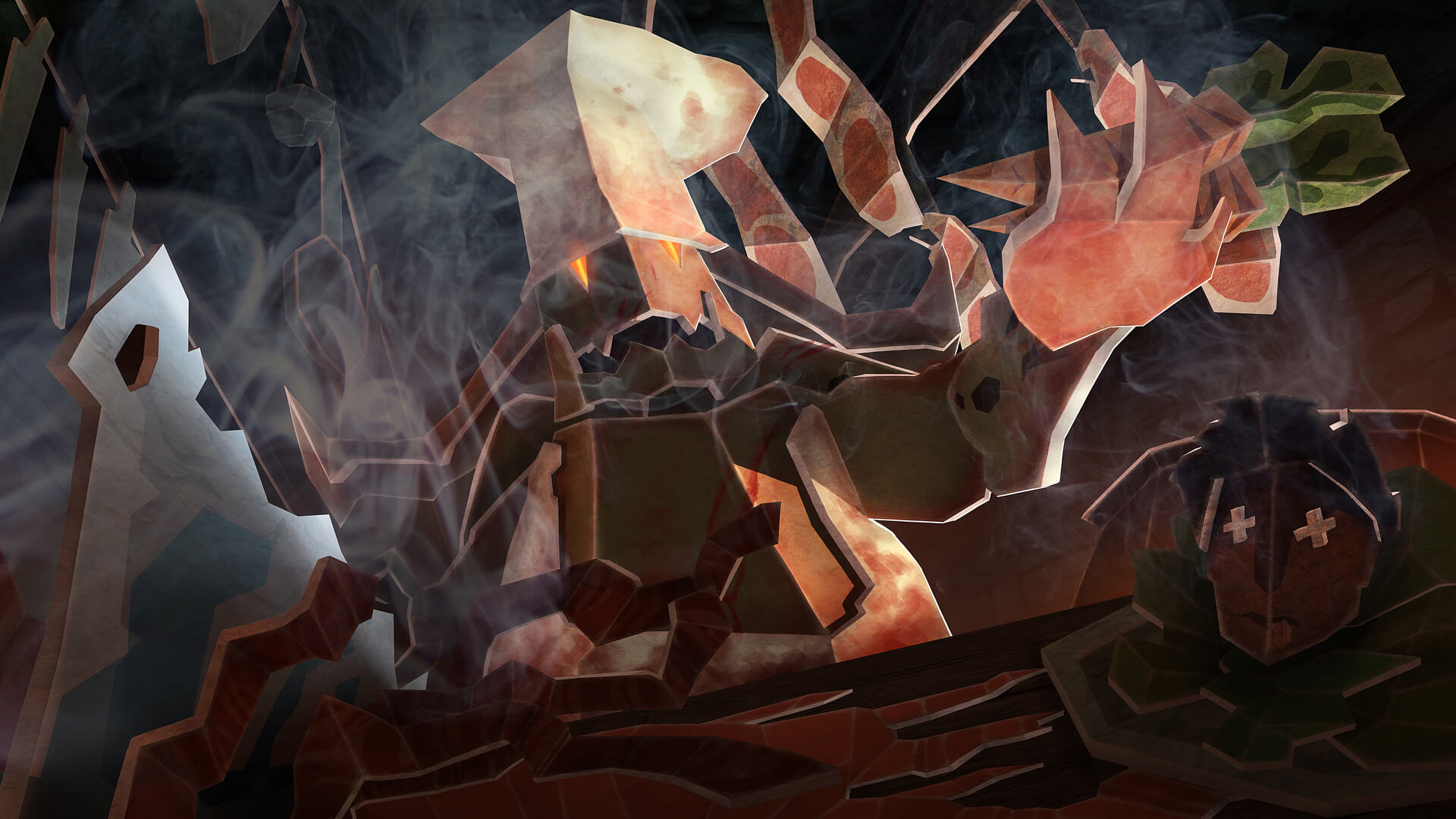 In conclusion, the duration of a complete run of Book of Demons is hovering around the ten of hours, obviously if you choose an average timing with the Flexbiscope, but depending on the needs of the player, the latter can be more or less long-lived. There replayability in addition it is a factor not to be underestimated in this title, in addition to selecting the different classes the experience can vary significantly if you choose the difficulty roguelike compared to the normal one, in which the cards and objects are distributed in a totally random way, and in which if our character dies, this is permanent and forces you to start the whole descent from the first floor again, unlike the normal runs, much more permissive in this situation.

Book of Demons therefore, despite the unbridled citations to the Blizzard saga, it manages to have its own soul and peculiarities that make this production a respectable title both for lovers of hack n'slash, and for those who want to get closer to the brand, attracted by the light-hearted and self-deprecating style of this great little indie.

Andrea Schietroma - March 6 2021
The Division 2 continues its path. On how, Ubisoft thought about providing clarification through a note appeared on the official website that, ...
Digital Card Games

Piermatteo Bruno - March 5 2021
Valve has announced - through a new post on the official Steam blog - the end of the development of Artifact, the controversial card game ...