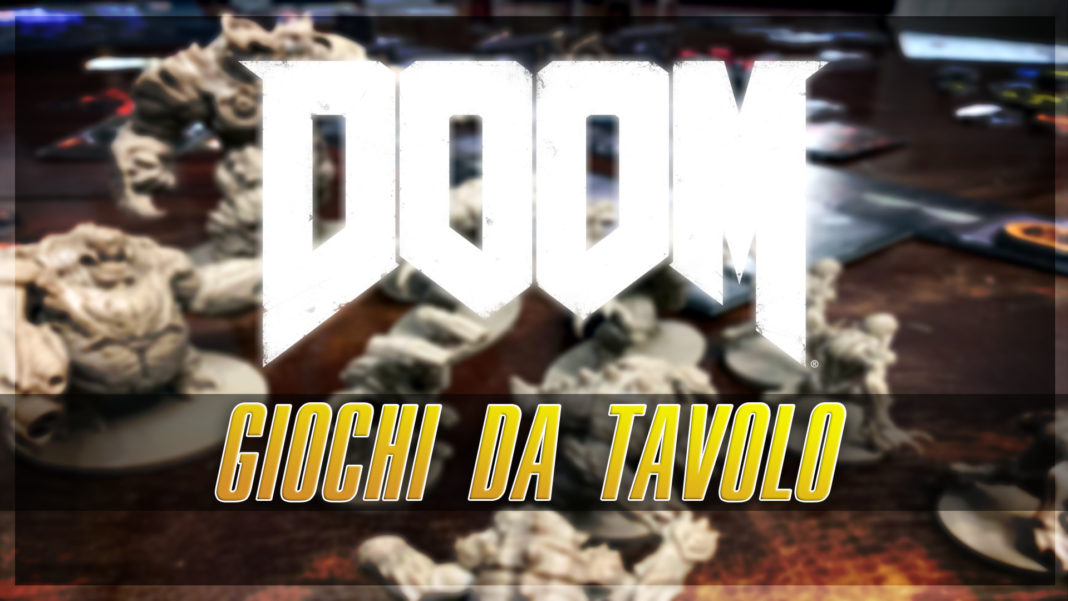 Thanks to the release of phase two, I had the opportunity to visit some "Conjoined" fans of board games and so we finally had the opportunity to get our hands on "DOOM" of the Fantasy Flight Game, game clearly inspired and aligned with the setting and lore of the latest generation video game that we all know.

I start immediately by saying that the title looks great. Already starting from the box it is clear that the desire to create an aesthetically valid product has been there. Surely lovers of the videogame title will notice the unmistakable graphics that immediately catapult us into the mood of what we will gradually explore. 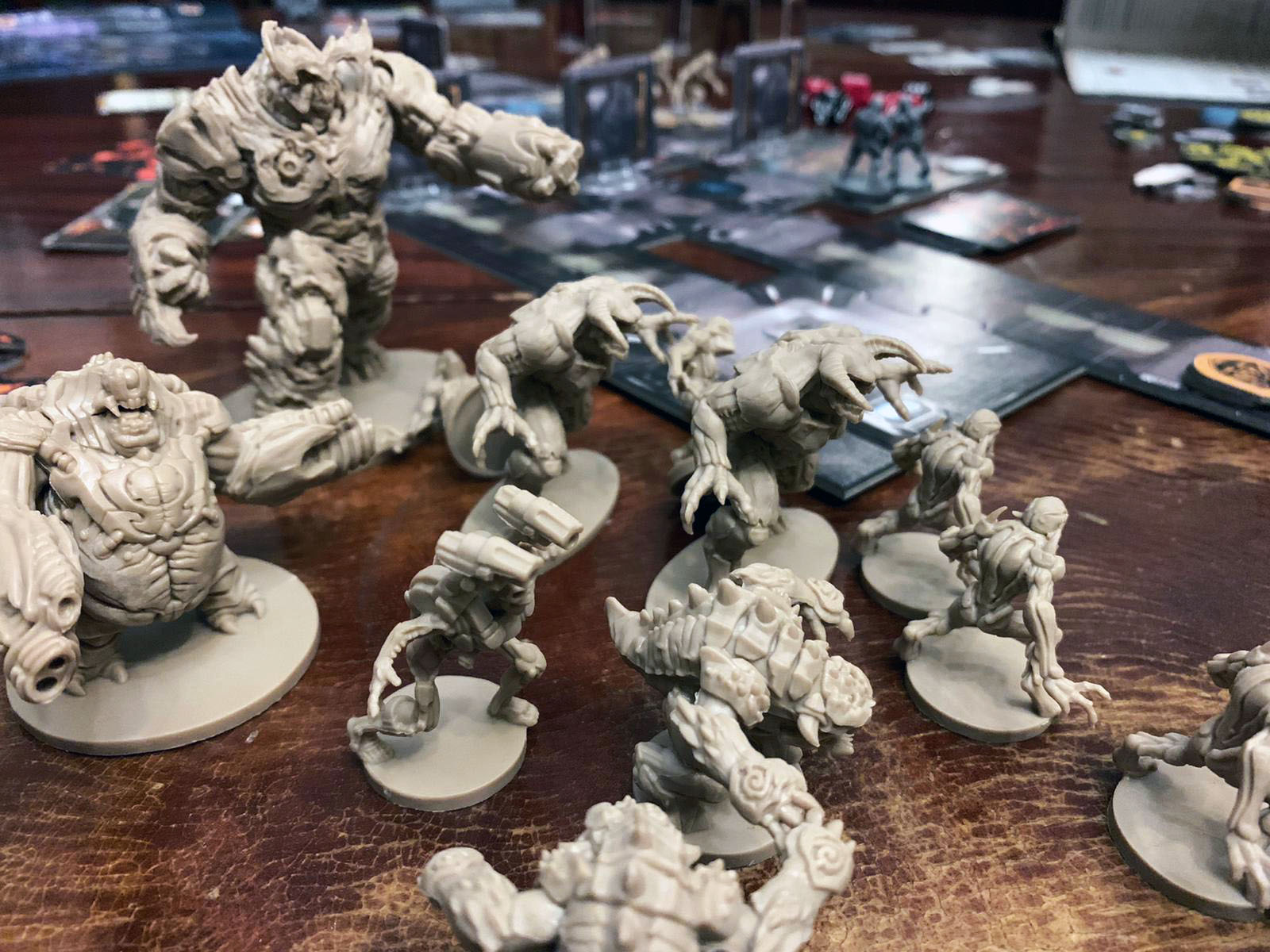 Considering that it is a game based mainly on adventure, it is very important that it is able to immediately transmit to the players a certain degree of immersion and here the components are absolutely the masters. The miniatures are excellent, detailed, large but not too large, perfectly make the idea of ​​what awaits us both to fight and to fight! Demons are perfectly represented in plastic and aggressive poses and faithfully respect those present in the game. On the contrary, the marines are resolute and give us the idea of ​​"get under the bitches" (sorry for the French, but I could not have expressed the concept better). The cards and manuals are really very beautiful, representative, immersive and above all the cards are slightly plasticized, just to prevent them from wearing out with normal use. Of course, for purists we always recommend the use of covers. The scoreboard is representative and above all, fundamental for this kind of titles, it is modular, which makes it extremely comfortable especially when there is to put it back inside the box, and this widens the game possibilities without incurring annoying or boring repetitions. It must be said, however, that in some points it could be a little confusing, but on the other hand it is intended to host the whole core of the action and inside it are represented all the most important things for the preparation of the missions. It should be emphasized that, when a scenario has to be assembled, it can be difficult to understand which pieces are to be used and which are not, as the identification writings of the modules of the board are really too small, and are almost hidden. 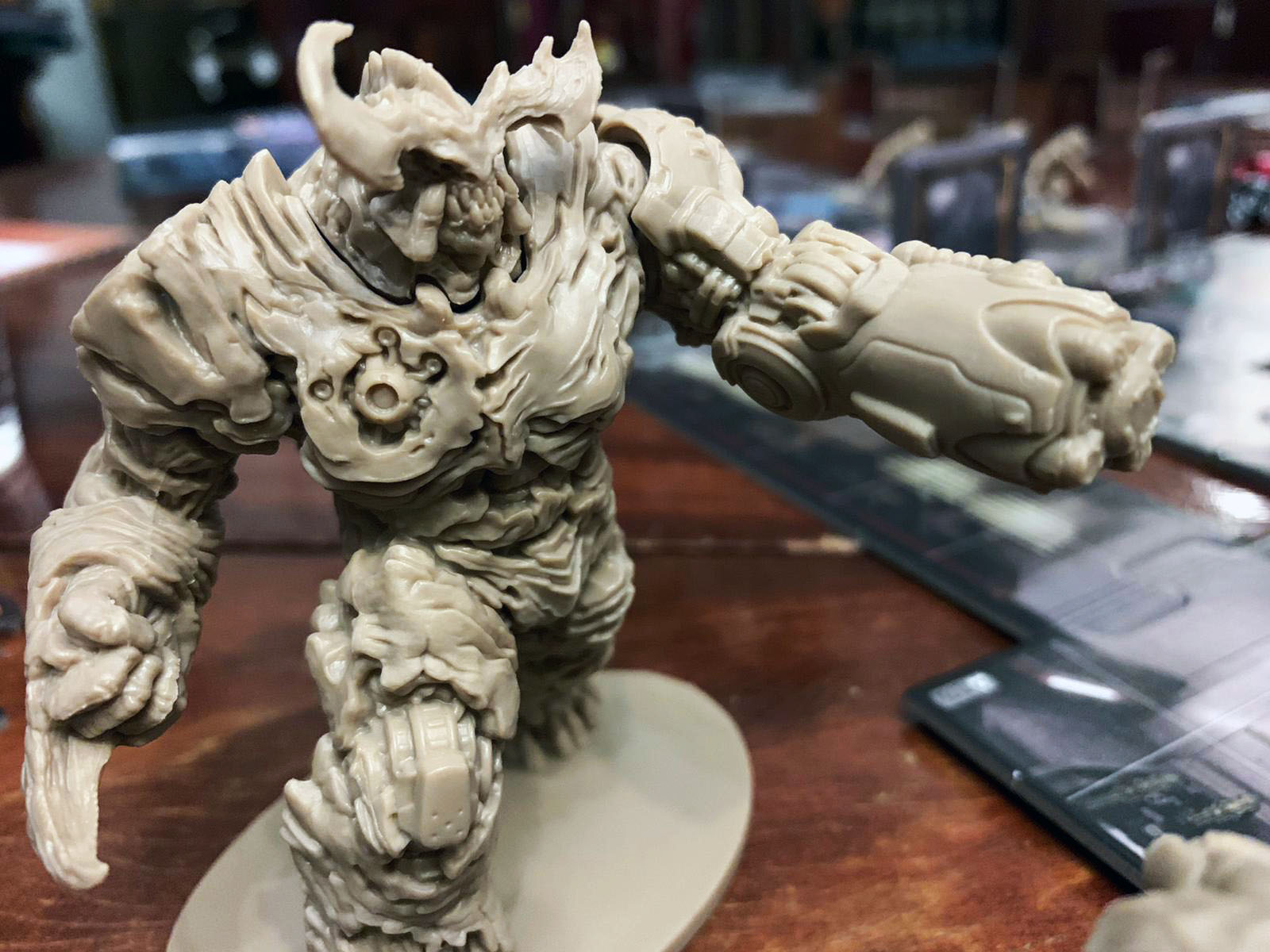 Our initial enthusiasm suffered a setback when we noticed that there are three manuals in the game and each has its own specific function, therefore we should have read all of them: Description of the scenarios, Compendium of the rules, Rules. The regulation and the description of the scenarios are fundamental, while the compendium of the rules is intended primarily to be a support to be used throughout the game, especially if you are a beginner. The scenarios are quick enough to prepare, the important thing is to carefully read the map on the manual that describes its composition and become familiar with the amount of markers we will need. However the sore point comes mainly on the regulation, which in some places seemed to us to take some dynamics very much for granted, but they weren't at all. In summary, you need to pay close attention to how you deal with the reading of the rules, since a minimal distraction could make you understand absolutely nothing about how the action should develop and this could generate some frustration especially in a group where there are people who they try their hand at the game for the first time. 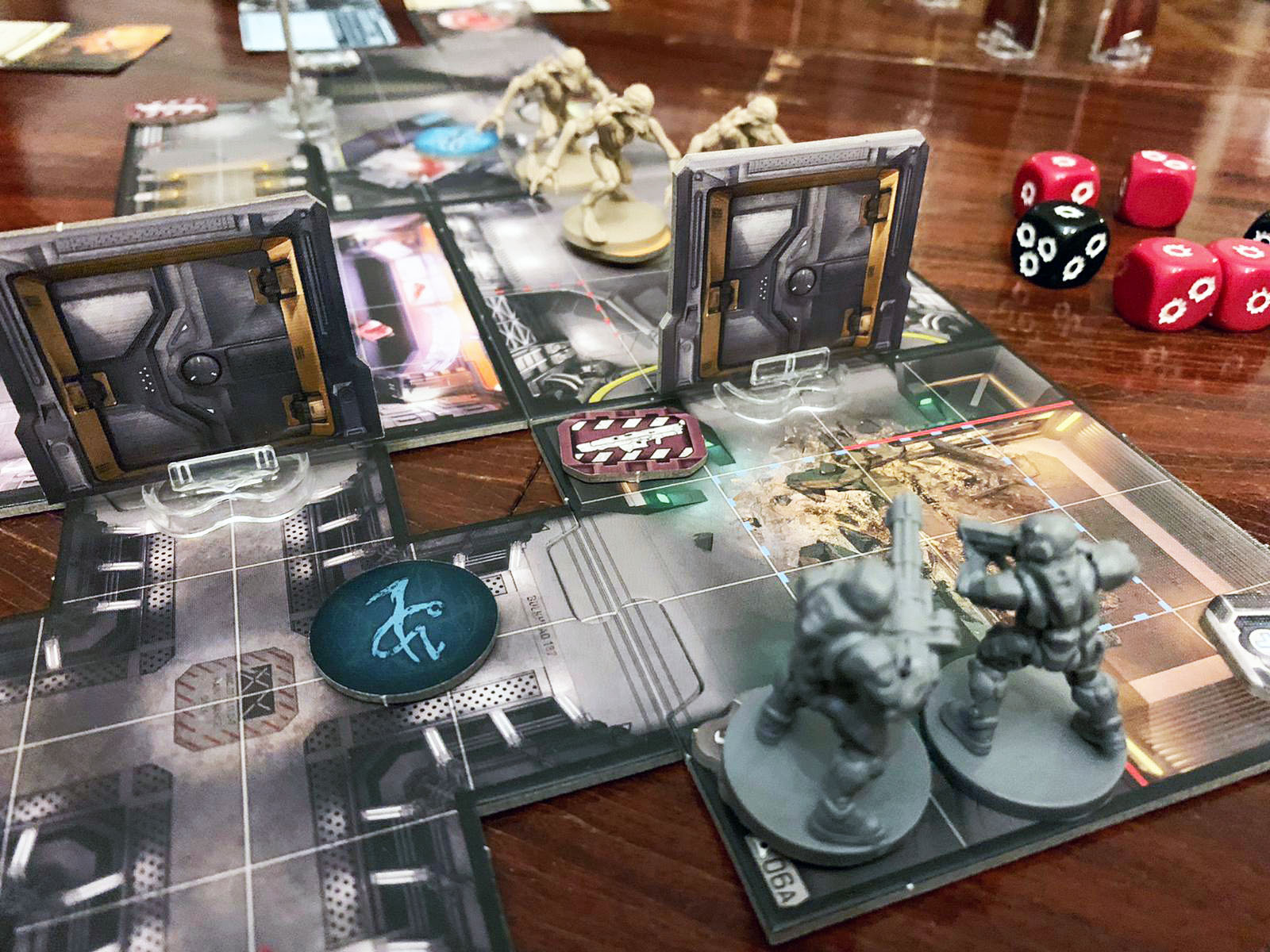 In any case, as soon as I learned the first rudiments and the game started, I can tell you that we immediately had good satisfactions: monsters, weapons to be collected, objectives to be captured, glyphs to be activated, covers to be used ... surely you will always have to think about what to do on your next turn. Also one thing that left me satisfied is the balance of the fights, on which in truth I was initially quite skeptical. Continuing during the development of the mission we realized that it is a truly enjoyable title in many ways and one of the things that really leaves you happy is the visual effect of the playing field as it fills up with monsters and marines. Of course, the games are not short: don't even think about starting to play if you don't have time to dedicate to them, in fact consider that an average game can last up to 3 hours, excluding all doubts and uncertainties about the rules, which will initially take you away a lot of time just to consult the manuals.

So the game is promoted and it is definitely a title for board game enthusiasts who appreciate challenges and who perhaps love DOOM. It is certainly not a simple game, but in my opinion this is absolutely not a defect, on the contrary. The fact is that if you decide to buy it and you will know how to dedicate the right "love" to him, he will certainly return you with fights and evocations of demons to be slaughtered which you can no longer do without. 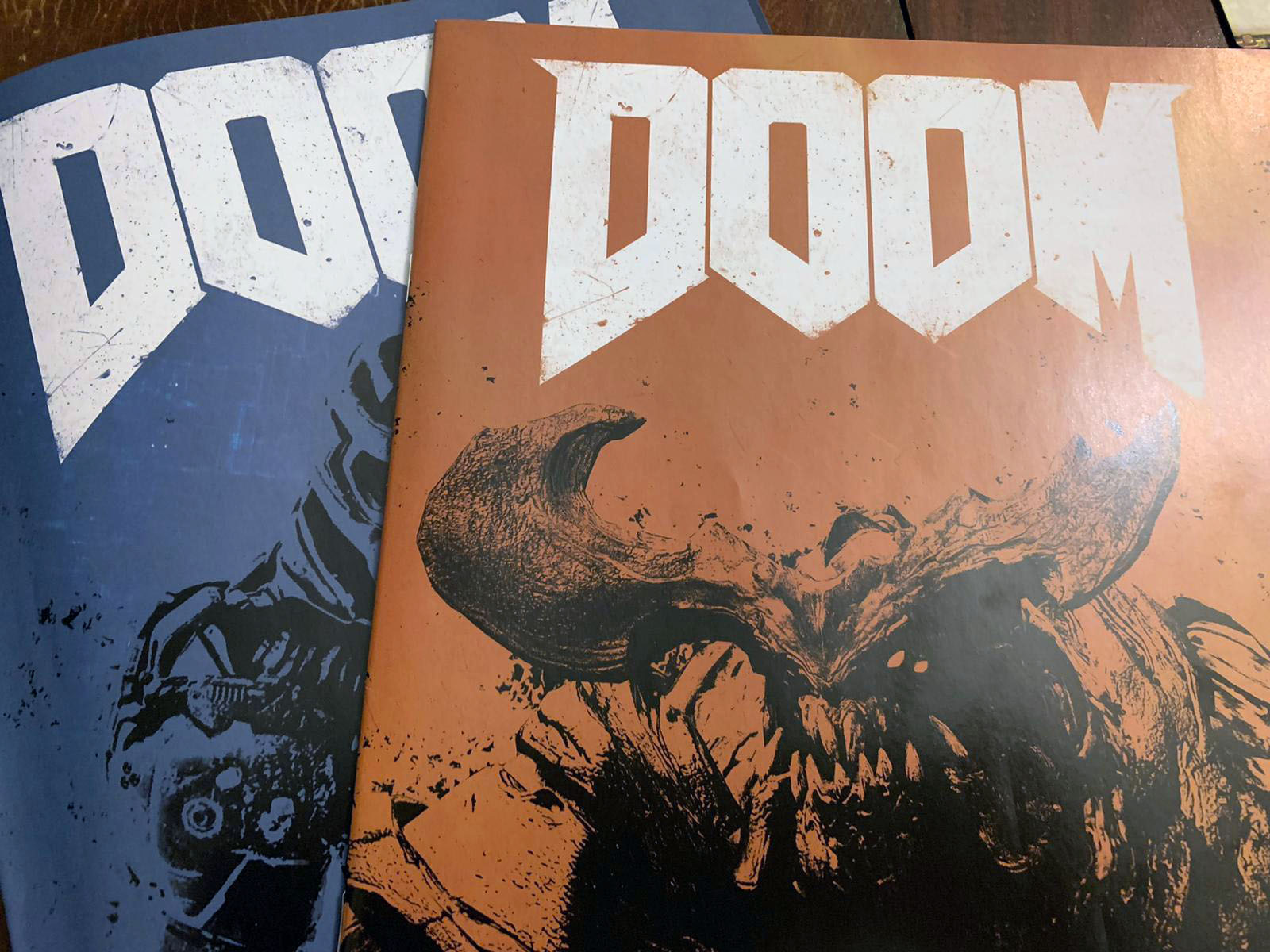 Cards Against Humanity - The staff goes against the workplace

Zynga concludes the transformative acquisition of Peak (based in Istanbul); expands ...

BusinessWire - July 2 2020
Zynga completes the acquisition of Peak starting from 1 July 2020 Peak will maintain its unique creative culture and brand identity Zynga will update the guide ...