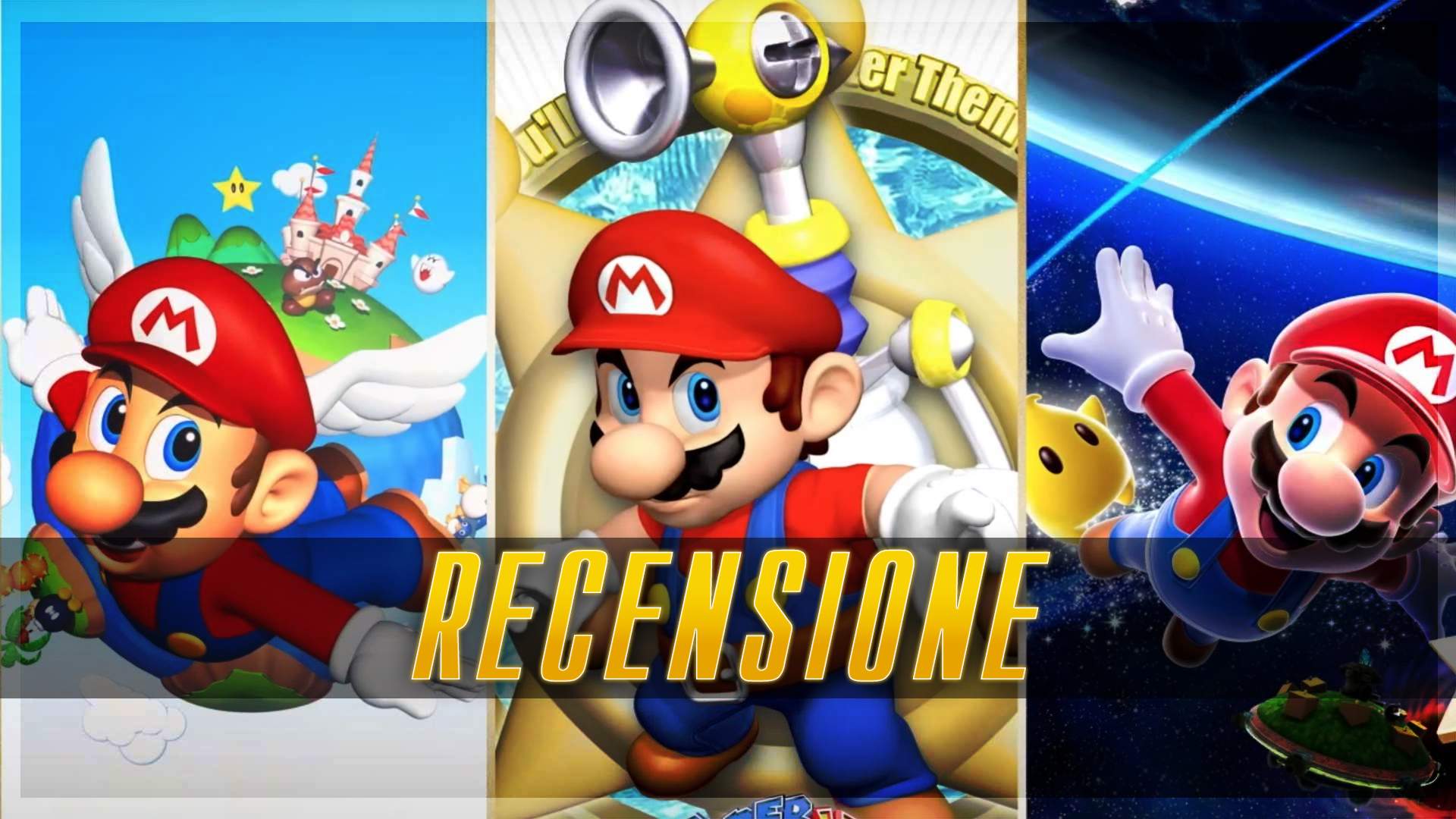 Home Reviews Super Mario 3D All-Stars - Review
Share
Facebook
Twitter
Google+
Pinterest
WhatsApp
within the banquet organized by Nintendo for celebrate 35 years since the release of Super Mario Bros, one of the main courses is the collection of the first three three-dimensional episodes of the most iconic and famous video game series of the Kyoto house: Super Mario 3D All-Stars.
The choice of the name is obviously inspired by Super Mario All-Stars, the first official collection of Super Mario games released more than 25 years ago and revived in these days also among the titles available on the Nintendo Switch online service in the catalog of SNES games. After taking a two-dimensional history review, it's time to take on the Z axis and dive into a new wave of memories with the sacred triptych Super Mario 64, Super Mario Sunshine and Super Mario Galaxy. 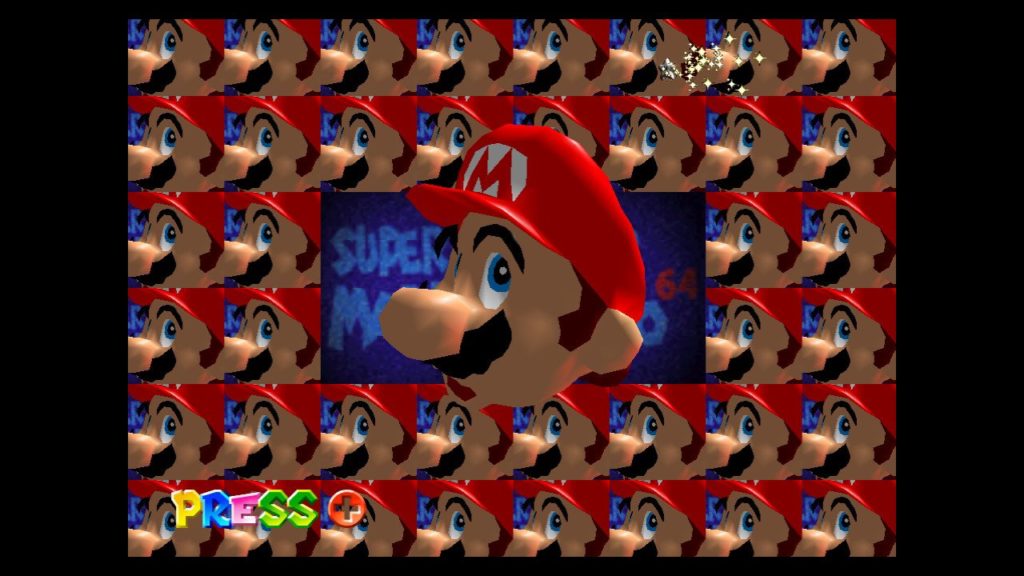 The games in Super Mario 3D All-Stars are re-proposed in a very similar guise to that of the time, without major makeovers, and therefore bringing with them the strengths and weaknesses of the original titles in the strictest sense of gameplay.
Super Mario 64 is presented in 4: 3, with HUD icons and on-screen text recalibrated to be in line with modern monitor resolutions. To be picky, text spacing could be handled better, with a little more top margin in the boxes. The textures of the game have not all been renewed, except in some specific cases such as the paintings of the Boos in Big Boo's Haunt, and this makes your mouth twist a little when the ground appears conspicuously pixelated.
The basic version is the Shindou, also known as International or Rumble Pak Edition in Japan, where it was released about a year after the original game. It has never seen the light of day in the West and also offered compatibility with the Rumble Pak, obviously also re-proposed on Nintendo Switch. Unfortunately for speedrunners, this version also fixed the Long Backwards Jump and therefore we can say goodbye to the possibility of finishing the game with 16 stars. The other famous glitches are instead present, so at least we can have fun going through the walls with the bunny that appears in the basement of the castle. And since Bowser is known as Koopa in Japan, we also salute the infamous "So long-eh, Bowser!" in favor of an anticlimatic and much more informal "Bye bye!" 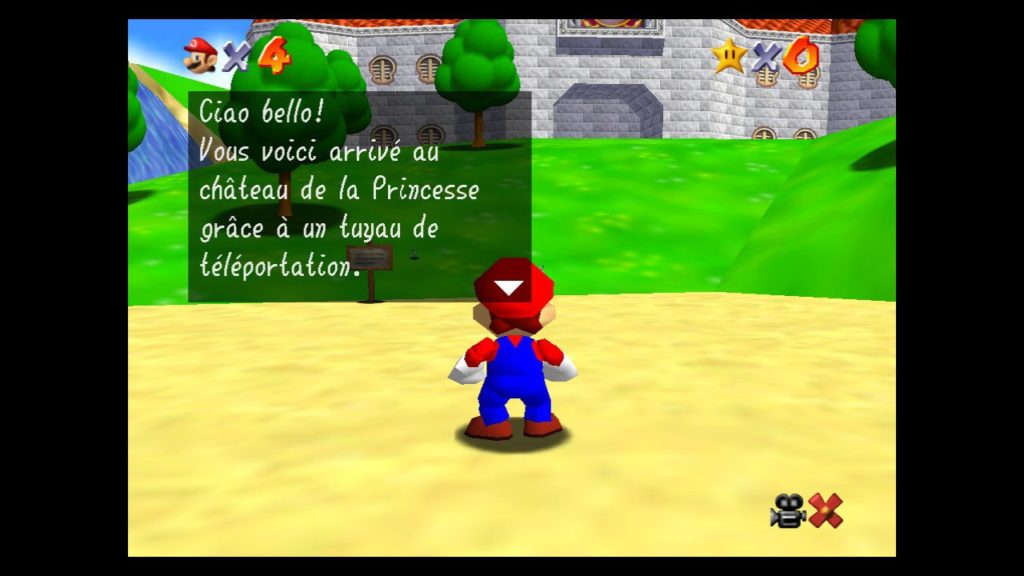 In Super Mario 3D All-Stars, translations in other languages ​​besides Japanese and are also reported the game's framerate has definitely improved: finally you can swim in Dire, Dire Docks in a fluid way. I can't understand why no others have been added in the face of this optimization, in particular on the draw distance, which would have solved one of the most obvious problems of the original game: the terrible pop-up from which it was affected.
The purists will certainly object that this would have had consequences on the gameplay: changing this parameter would have caused the activation of the elements, including enemies, well before normal, going to alter the original experience of the game. It is certainly true, but I still think that entering Rainbow Ride and looking around immediately seeing all the active platforms around the sky would have been a really nice view. 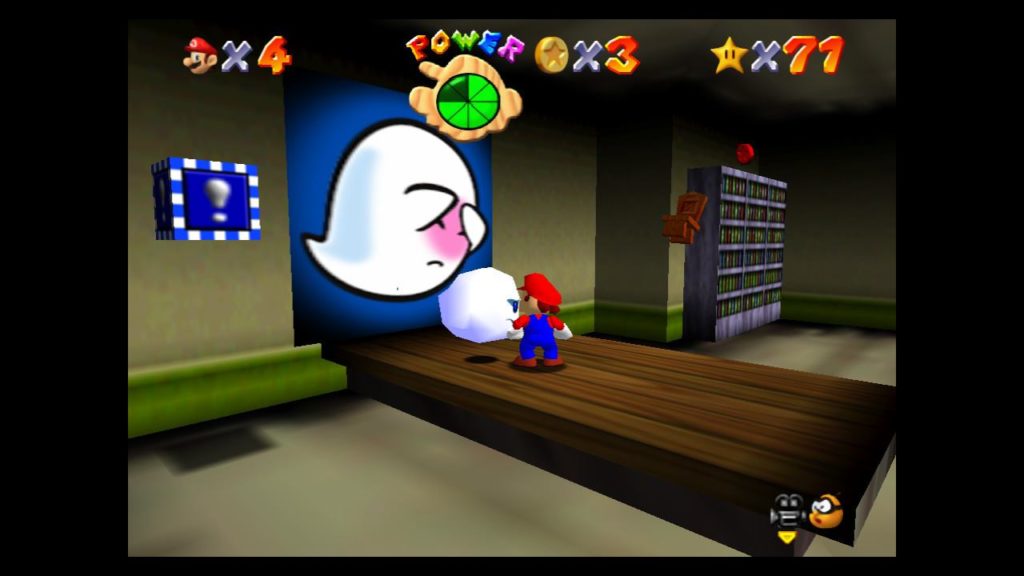 Console change with landing a Delfinia to savor the strangest of the Super Mario 3D All-Stars games, or Super Mario Sunshine. The game has been "expanded" to 16: 9 and the overall rendering is as pleasing as and more than the original. Less satisfying seemed to me the videos, which seem a bit blurry following the upscale to which they were subjected. Unfortunately, this "blur effect" also occurs in the final battle, which is actually a bit annoying. I also wanted to play it on the GameCube for confirmation and unfortunately I had to note this hiccup. Another small flaw: in comparison with Mario Ombra in Delfinia, the game slows down dramatically, very little justifiable. Fortunately, the painful notes end here.
GameCube also means analog backbones, which in the original game regulated the pressure with which the water was sprayed with the SPLAC 3000 and if pressed fully blocked Mario in place. In the controls for Nintendo Switch the solution was split the command in two: ZR to spray water while moving and R to spray it while stationary. Simple and effective solution: you only lose the ability to adjust the intensity of the spray, but the change never creates problems during the game. 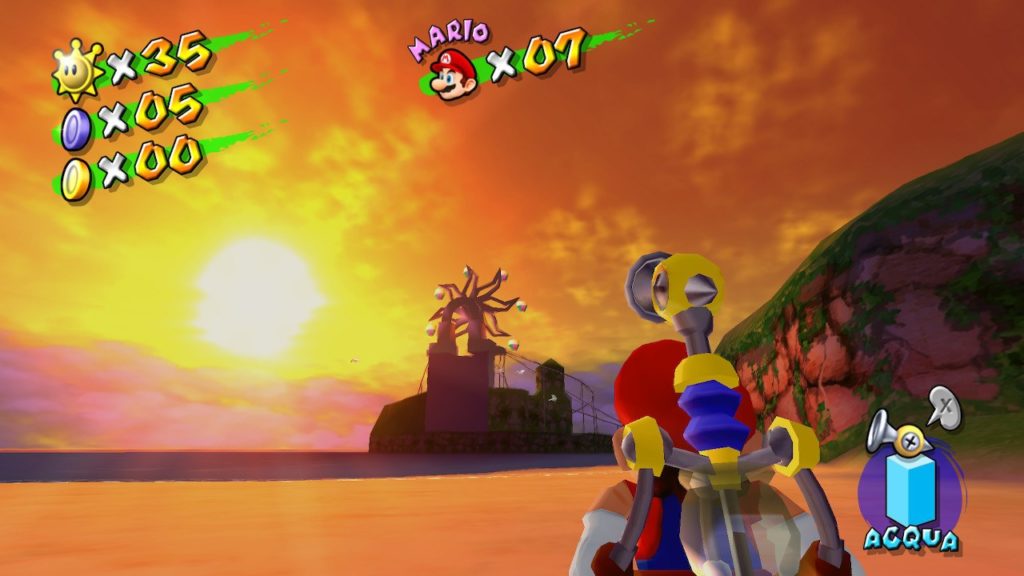 Other than the same type of interventions implemented in Super Mario 64 on the icons, there are no other improvements. So, if you play in Italian, choose the eighth mission of Lido Raggiante and read the sign in front of the entrance to the level, theThe game will go softlock as it was 18 years ago. 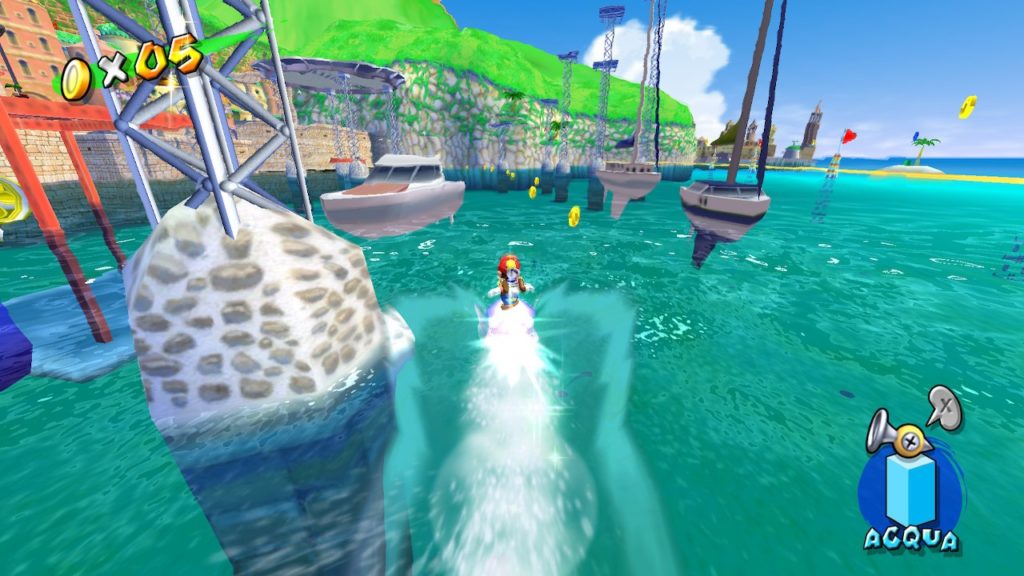 The last leg of this journey into memories takes us to the space of Super Mario Galaxy, which of the three titles offered by Super Mario 3D All-Stars is the one in the most dazzling form. Undoubtedly it affects the most graphic detail of the base game, but Galaxy still seems to have an edge. There are no small upscale issues noted in Sunshine, and indeed the sidereal backgrounds allow you to experience a truly intense sense of depth.
Originally released on the Nintendo Wii, Super Mario Galaxy took full advantage of the features of the Wiimote, especially for on-screen pointing. The solutions adopted in Super Mario 3D All-Stars will not be perfect, but they succeed in the goal of providing a positive experience, where making a mess would have been all too easy. There are basically two ways to go: touch screen in portable mode or controller accelerometer. 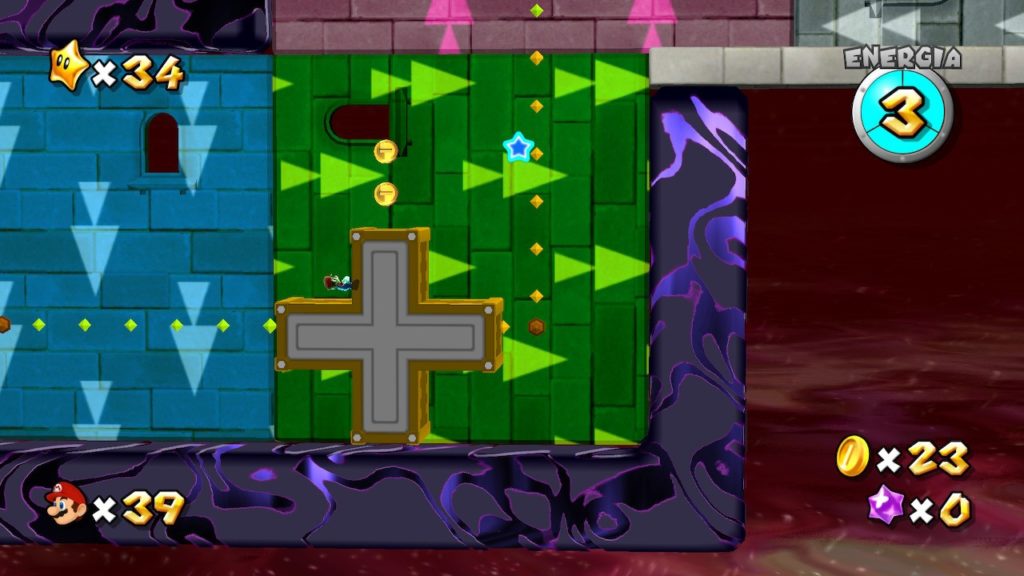 The touch screen tries its best, but is very uncomfortable. It may still be fine if it's just about collecting Star Bits, but trying to use it in more dynamic situations is prohibitive. Fortunately, the accelerometer comes to our rescue: pressing R activates the pointer in the center of the screen, which can then be moved by tilting the controller. It may sound complicated and unintuitive, but anyone who has chewed a little of Splatoon knows that the mechanism works great and gets used to it very quickly. When playing in handheld mode, it is necessary to unplug the Joy-cons, or directly use another remote controller, to access this control method, otherwise you are forced to use the touch screen. 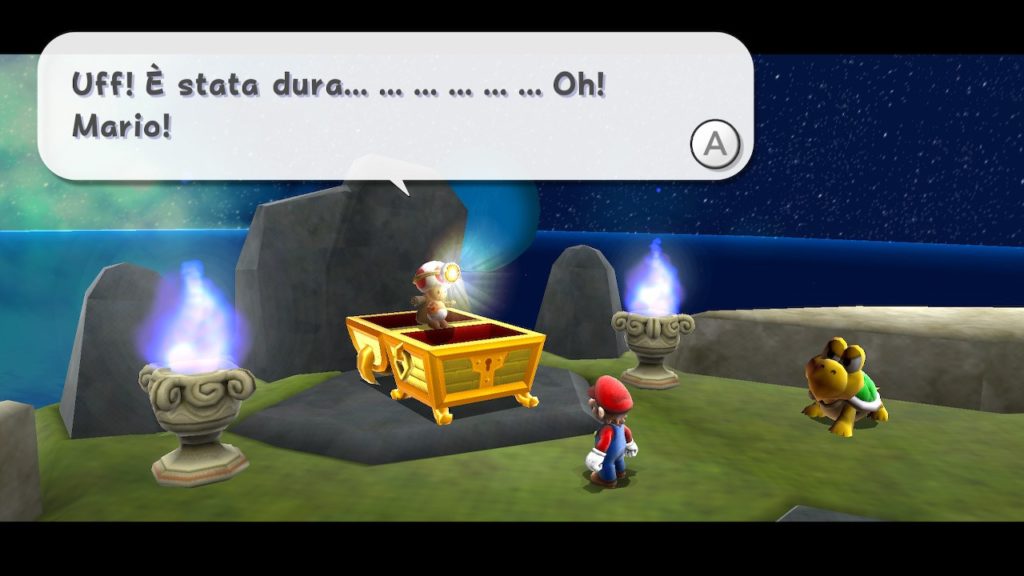 All three Super Mario 3D All-Stars games maintain a very high degree of playability and that has nothing to envy to the original counterparts. Retracing the deeds of the mustachioed plumber is, needless to say, a great emotion and an immense pleasure.
At this point, being a collection, it would be time to talk about the extras. Here, this is the most painful point of all: there are none, if not the soundtracks. For the rest nada, niente, niet, rien de rien. There isn't even an introductory movie or a rolling demo: just three seconds of animation, one per game, and then the fixed title screen.
This is indeed an inexplicable aspect and a huge missed opportunity. Super Mario 3D All-Stars comes out to celebrate the story of three great games: it could be an opportunity to show a gallery of concept art, screenshots of beta versions or discarded ideas, even small videos of some behind the scenes and instead nothing. Given the certainly not economic cost of the title, expecting something more was absolutely legitimate. 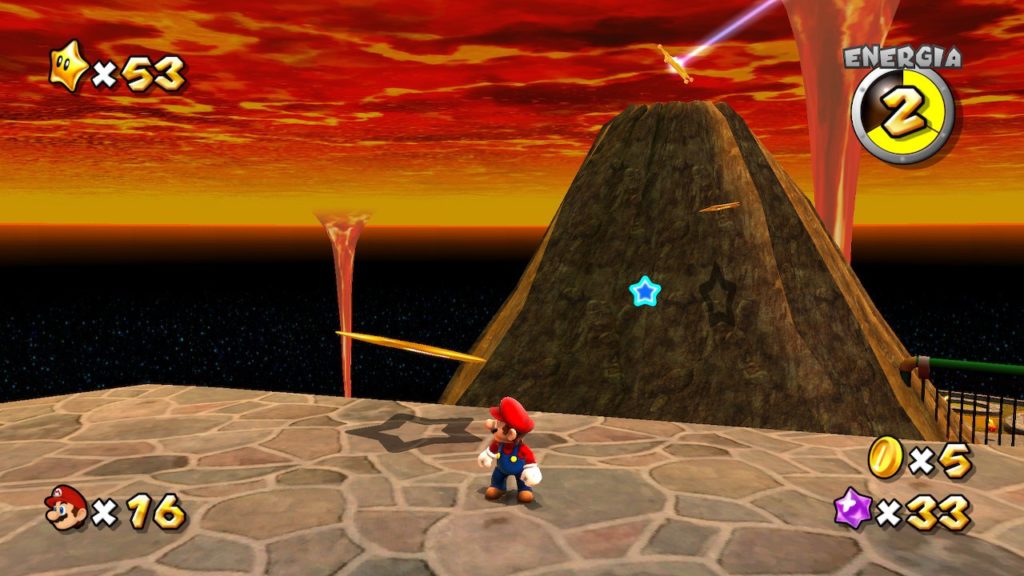 Pulling the strings, is Super Mario 3D All-Stars to buy or not? Those who have never played these titles and want to fill their gaps will have nothing to regret. Moving on to those who have only played a few titles to get to those who know them by heart, the discussion becomes much more subjective: the cost is undoubtedly high for the contents offered. However, the convenience of having the three titles available in one place is high. For those who are in love with this saga, the economic effort can be easily done. You know very well that as much as you look for reasons not to buy it, then you will want it anyway.

Vincenzo Marino - February 25 2021
The State of Play ended with a very welcome surprise for Final Fantasy fans. Final Fantasy VII Remake will in fact be published ...
Midgar awaits us
News

Vincenzo Marino - February 25 2021
Five Nights at Freddy's returns to terrorize players in this new incarnation, completely original compared to the canonical series. During the State ...