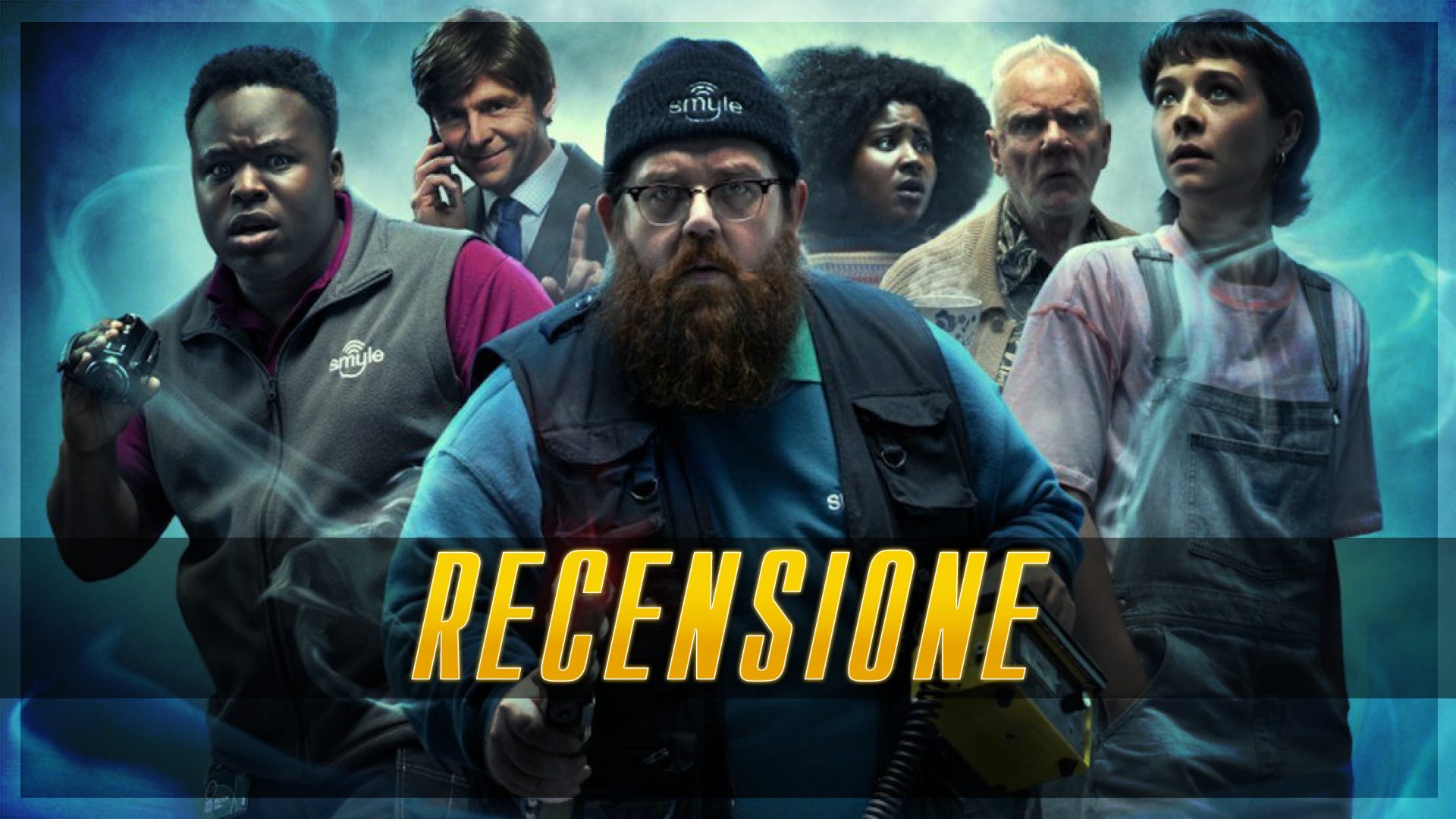 As can be guessed from their participation in the project, Truth Seekers is a comedy that is tinged with horror using as a starting point the internet communities interested in the occult and the supernatural, which often lead to conspiracy theories. This connection is evident from the first (and unfortunately one of the few) scene with the two friends: Dave (Simon Pegg) is a manager of Smyle, a large company specializing in futuristic 6G, and is essentially forcing Gus (Nick Frost), router, to take a young man under his wing to teach him the trade. Strongly opposed Gus complains that he already has enough dead weights on his shoulders, but eventually gives in, and we make the acquaintance of Elton (Samson Kayo), who was silently watching from the corner. But Gus's hard rind doesn't hold up for long, and he'll soon open up to the rookie, much to involve him in his hobby and in what he considers his vocation: find and film evidence of supernatural phenomena. It matters little that so far he hasn't collected anything. At the same time, Astrid is also introduced, a young woman about whom we still know nothing, except that she is haunted by horrible apparitions. Part of the main cast also Susie Wokoma and the immense Malcolm McDowell, who plays Gus's aging father, fresh from the recent discovery of the internet and social networks.

Elton is our stand-in and the point of view from which we approach the world of Gus, made up of unlikely experts and conspiracy theories, ectoplasm detectors and vlogs, all while carrying on, in his own words, “The most boring job in the world”. In reality it is thanks to their use that Gus and Elton will take on the role of “Truth Seekers” making interesting discoveries, since every request for assistance suddenly seems to be linked in some way to supernatural manifestations. The chemistry between the two protagonists is there and works (even if Simon Pegg's lack is conspicuous and undeniable), starting a bit subdued but stabilizing in time for Astrid's arrival. Their role, however, is somewhat scaled down as the episodes continue: while the protagonists remain, a lot of screen time is given to the rest of the cast, fortunately also to Malcom McDowell, whose character initially seemed a sort of cameo.

Truth Seekers is an interesting product, excellent from a technical point of view, with excellent special effects (or which at least look like these on a PC screen), with some glaring exceptions. But above all, even without the genius of Edgar Wright behind it, maintains the right balance between comedy and horror elements, which come out strengthened by the mixture of the two. The performances are fantastic, over the top but without exceeding, also here consolidating the tone that the show seems to seek, without getting too far off in either way. The music of Robin Foster is also excellent, especially the outro of the credits, disturbing and intriguing in equal measure. I do not want to do any spoilers on the plot, it starts well and ends a little less well, from the fifth episode it accelerates and has some pacing problems but gives the right space to the characters, so much so that a veteran of comedy like Nick Frost is not constantly the center attention. The biggest disappointment was the paucity of scenes with Simon Pegg, who (at least for now) is basically relegated to a supporting role, but there's still time to be pleasantly surprised in a possible second season. The scenographies are sometimes not particularly inspired, as well as the segments shot by hand by the characters, but it could also be a choice of the authors to underline the dozenness of many "content creators" who deal with paranormal phenomena. The photography in some scenes is inexplicably overexposed, and the lense flare is largely abused in some shots.

The eight installments of Truth Seekers are introduced by flashbacks referring to events that they provide a general context about the world and a particular one for the episode in question, giving an almost anthological nature to the whole, or at least giving more depth to the vertical plot. This episodic narrative is also the main source of payoffs, given that after four episodes that limit themselves to setting the story in motion, four more episodes follow that close it in a not exactly great way. The horror elements are certainly not revolutionary, but they do not even leave an unpleasant sense of already seen, however it is a characteristic and not cheap approach to the subject. The management of the horror elements themselves maintains a certain English aplomb even in the most excited moments, keeping far away from the parodic style of American productions.

After all I was positively impressed with Truth Seekers, a modest production with many highs and some lows, but that's basically manages to entertain the viewer on several levels. I highly recommend watching the original language - the actors absolutely deserve it.

Fallout, the TV series will go into production this year