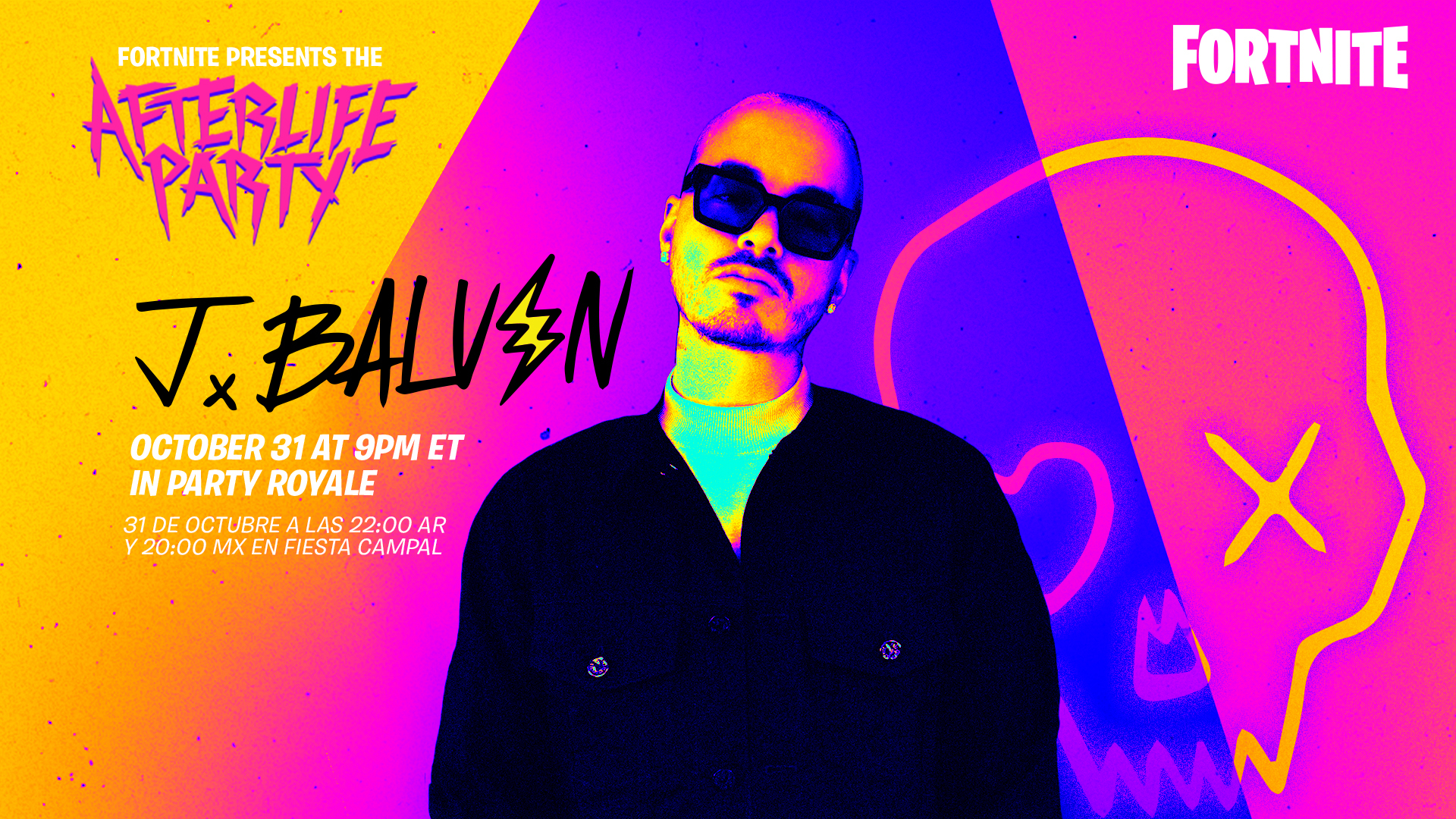 This unique, one-of-a-kind performance will premiere on Halloween night (Saturday, October 31, 2020, at 9 PM ET / 6 PM PT). The concert will take place in Fortnite's Party Royale mode, the game's no-combat social space where players can get together with friends to catch concerts, watch movies, or just chill. The show acts as a headliner for this year's Fortnitemares event, an annual game-wide event that starts in Fortnite today. Fortnitemares 2020: Midas' Revenge features new gameplay, challenges, in-game rewards, and more. The concert will also simultaneously premiere in Houseparty, the face-to-face social network owned by Epic Games.

“I am always looking for innovative ways to connect with fans that have been so incredibly supportive of my career and music, as well as gain exposure to future fans,” said J Balvin. "Partnering with Fortnite is an out of this world way to perform a concert in 2020."

“This show is going to be incredibly special, and nothing like our players have seen so far,” said Nate Nanzer, Head of Global Partnerships at Epic Games. “J Balvin was the perfect partner to work with to create an unforgettable show as his music appeal is boundless. We are honored to work with him and bring his music to fans worldwide. "

J Balvin and Epic Games will be bringing this performance to life using innovative XR (cross reality) technology using LED walls and camera tracking. Fans won't want to miss this unique performance on the big screen at Party Royale, where Balvin will perform in a completely virtual world created exclusively for this event.

In honor of the show, a new nightlife take on a Fortnite favorite, the Party Trooper Outfit, is available in the Item Shop now all the way through November 1 at 8 PM ET! All Party Trooper owners that attend the Afterlife Party in Fortnite will unlock the exclusive J Balvin style for the outfit.

Fortnite is available as a free download on PlayStation 4, Xbox One, Switch, PC, and Android via www.fortnite.com. New to Party Royale? Find out how to get to Party Royale and the Main Stage in our newcomer's guide.

Founded in 1991, Epic Games is an American company founded by CEO Tim Sweeney. The company is headquartered in Cary, North Carolina and has more than 40 offices worldwide. Today Epic is a leading interactive entertainment company and provider of 3D engine technology. Epic operates Fortnite, one of the world's largest games with over 350 million accounts and 2.5 billion friend connections. Epic also develops Unreal Engine, which powers the world's leading games and is also adopted across industries such as film and television, architecture, automotive, manufacturing, and simulation. Through Unreal Engine, Epic Games Store, and Epic Online Services, Epic provides an end-to-end digital ecosystem for developers and creators to build, distribute, and operate games and other content.

"Reggaeton's Global Ambassador" - 4-time LATIN GRAMMY winner J Balvin is now one of the Top 10 streaming artists in 11 different countries on Spotify and Top 10 in 14 countries on Apple Music, regardless of language, and has developed a legion of fans worldwide. Hailed by Billboard as “the biggest breakout act Latin music has seen in many years” and Pitchfork as “the face of modern Reggaeton,” Balvin is leading a second generation of Musica Urbana stars that have propelled Latin music to an unprecedented global embrace. His latest album, Colores, saw both critical acclaim and commercial success. With “Blanco,” “Morado” and “Rojo” going # 1, J Balvin brought his total to 27 songs earning the # 1 spot on the Latin Airplay Charts over the course of his career. Most recently, his collaboration with Dua Lipa, Bad Bunny, and Tainy, “UN DÍA (ONE DAY),” grabbed the title, garnered over 400M streams and is RIAA certified 6X Platinum. With his music and impact on the culture, Balvin has cemented himself as not only a leader of Reggaeton but as a torchbearer of the new state of Latin music by continuously expanding the limits of the genre and paving the way for "la nueva escuela."

Warframe coming to PlayStation 5 this week

Gian Luca Cama - November 25, 2020
The free to play title Warframe will be added to the PlayStation 5 catalog later this week. Seven years after its launch, the ...
BusinessWire