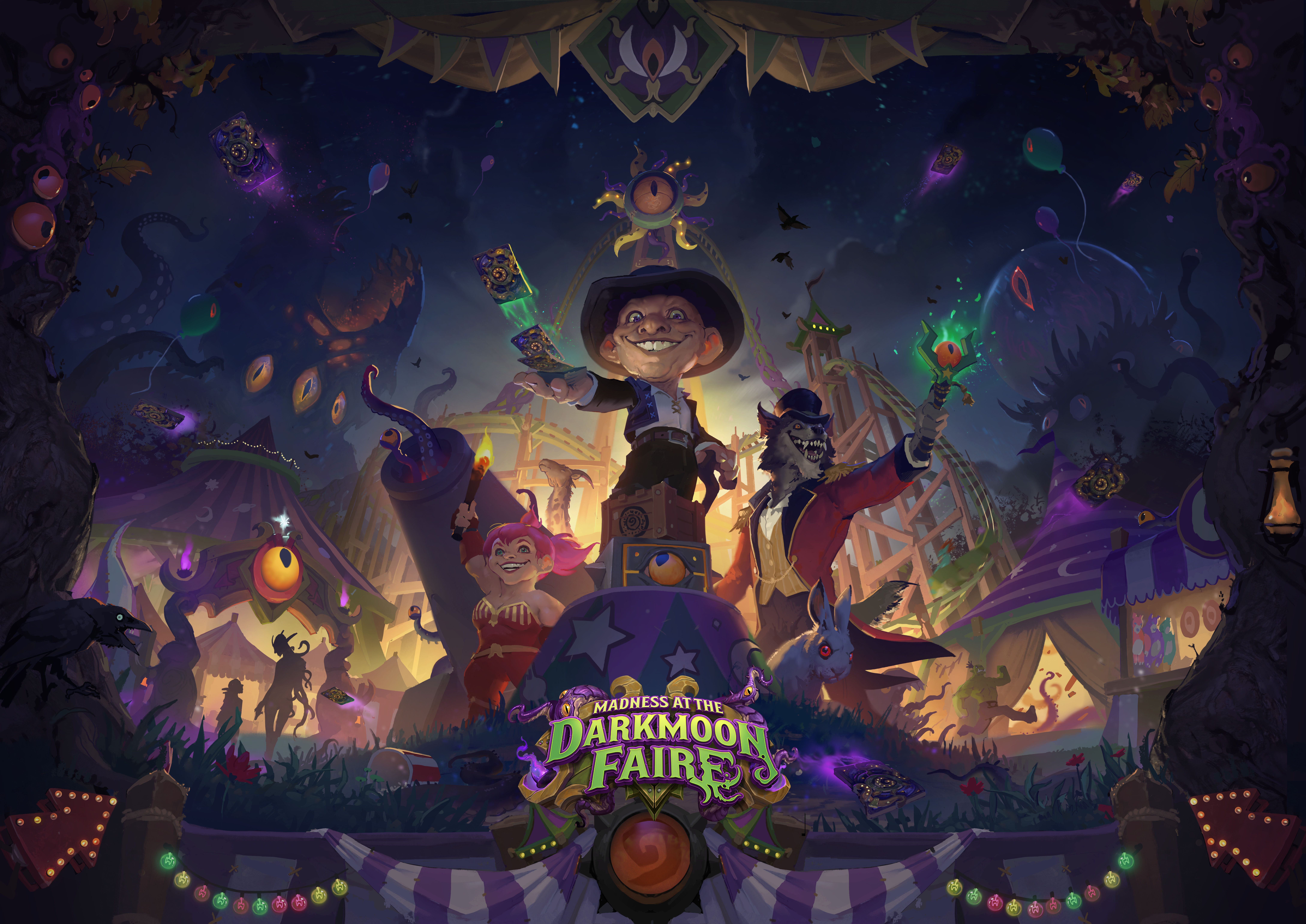 IRVINE, Calif .– (BUSINESS WIRE) –Azeroth's famed traveling carnival has come to town with Madness at the Darkmoon Faire™, the latest expansion for Blizzard's smash-hit free-to-play digital card game. Anyone looking to experience the dazzling wonders and attractions should take heed — the fairgrounds hum with the ancient evil of the Old Gods, who are eager to tempt players with 135 all-new cards corrupted by their terrifying power.

The Old Gods, who first came to Hearthstone in 2016's fan-favorite expansion Whispers of the old gods™, return in Madness at the Darkmoon Faire as new Legendary minions that evoke their match-swinging powers of days long past. In addition to the dreaded C'Thun, N'Zoth, Y'Shaarj, and Yogg-Saron in minion form, players can also harness Old Gods Artifacts—Powerful new spells that recall the original abilities of these ancient horrors from Whispers of the old gods. Players seeking a further edge can add cards with the new Corrupt keyword to their decks, which upgrade into substantially more powerful forms in-hand when a higher cost card is played.

"The Old Gods spawned the creation of some truly astonishing decks the first time around, so we're thrilled to welcome them back to Hearthstone With Madness at the Darkmoon Faire, ”Said J. Allen Brack, president of Blizzard Entertainment. “We're also excited to begin the first season of Hearthstone Duels. It's encouraging to see early-access players having a blast with it, and we're looking forward to see it evolve and grow now that it's available for everyone. "

Today marks the start of the inaugural season of Hearthstone Duels, an all-new and Completely free competitive game mode that combines the thrill of the player-vs.-player Arena mode with the delightfully unpredictable and over-the-top deckbuilding experience from the game's most beloved Solo Adventures. duels challenges players to build starting decks from their own collections and improve them with additional cards and game-changing Treasures after each match.

Each season, the pool of available cards in duels will be refreshed from Hearthstone's vast card-set catalog, and they'll be accompanied by new Heroes, Hero Powers, and signature Treasures. The theme for this debut season is Wizard Duels, starring a cast of Heroes pulled from the scholars and luminaries of the Scholomance Academy™ expansion.

Players can also try their hands at Hearthstone Duels Heroic mode to earn rewards such as in-game gold, cards, card packs, and Arcane Dust. Heroic mode duels runs can be accessed by paying 150 gold or purchasing a Tavern ticket for $ 1.99 USD. The better the player's record at the end of the run, the greater the rewards.

Hearthstone recently introduced the new Rewards Track, which allows players to earn in-game gold, cards and packs, cosmetics, and more. It includes a free track that is open to all players, and a paid track that can be unlocked by purchasing the Tavern Pass for $ 19.99 USD. Purchasing the Tavern Pass at any point during the expansion will immediately grant the Golden Silas Darkmoon Legendary minion, an XP Boost that lasts for the duration of the expansion, and all paid track items up to the player's current level. Progression along the Tavern Pass paid track will also unlock the following items: the Annhylde Alternate Warrior Hero and Card Back, three Jaina Hero Skins, three Thrall Hero Skins, and one of Hearthstone's first-ever collectible Cosmetic Coins.

For more information on Madness at the Darkmoon Faire and Hearthstone Duels, visit:

Assets are available at https://blizzard.gamespress.com/hearthstone.

With more than 100 million players worldwide, Hearthstone is Blizzard Entertainment's internationally acclaimed, free-to-play digital card game designed for novice and veteran card-slingers alike. Players can choose from 10 powerful hero classes and customize their decks with minions, spells, and weapons based on the unique fantasy of the Warcraft® universe. Featuring a variety of game modes from epic head-to-head to story-driven Solo Adventures, Hearthstone offers a vibrant and rewarding experience stacked with strategy, personality, and fun. Hearthstone is available globally for Windows and Mac PCs; Windows, iOS, and Android tablets; and iOS, and Android mobile phones.

Best known for blockbuster hits including World of Warcraft®, Hearthstone, Overwatch®, The Warcraft, StarCraft®, and Diablo® franchises, and the multifranchise Heroes of the Storm®, Blizzard Entertainment, Inc. (www.blizzard.com), a division of Activision Blizzard (NASDAQ: ATVI), is a premier developer and publisher of entertainment software renowned for creating some of the industry's most critically acclaimed games. Blizzard Entertainment's track record includes twenty-two #1 games* and multiple Game of the Year awards. The company's online gaming service, Battle.net®, is one of the largest in the world, with millions of active players.

*Sales and / or downloads based on internal company records and reports from key distributors.