We thought 2021 would be a year better after 2020 saw a pandemic explode globally. Yet it seems that things can get even worse. Because none of the problems of 2020 seem to end, indeed, it seems to worsen. But here we are on PDVG. We are interested in being able to buy the latest generation consoles and new CPUs and GPUs for our computers. A task that appears somewhat arduous, that's why.

Why is there a shortage of GPUs and consoles and do they cost so much?

Because the demand is greater than the supply.

Why don't they increase production?

All producers are trying to increase their production capacity but it is neither a fast nor a cheap process.
Many new factories announced will only be ready in years. Do you think that the recovery found money to try to restore Italy amounts to 206 billion in 6 years. Which is the same density of spending as a single semiconductor manufacturer to increase production.

How did this come about? Whose fault is it?

People who buy too much.

No, that's not true, it's a conspiracy to keep prices high. The fault lies with the producers.

Let's say it was a combination of factors. At the start of the pandemic in 2020, world governments seemed aligned: enforcing restrictions that would lead to recessions. So all the manufacturers have lowered their forecasts and started canceling orders and in any case relaxing production in view of the "if people don't have money, they don't spend it".
What was never more wrong and the absurd increase in sales of the videogame and computer sector, both for leisure and for DAD, smartworking and mining, has practically upset all plans.

Who is it that produces electronics for the world? How is the production organized?

There aren't many factories in the world. The big producers are Samsung, TSMC ed Intel. Production takes place by planning what I need months in advance. Let's take a company like Apple. It is estimated that it will sell 1 million iPhone 12. It will therefore need 1 million chipsets, screens, memory units and so on. Then he goes to ask the component factories to have 1 million iPhone 12s for a given month and the daily production is calibrated to achieve that goal. There is no particular shortage of iPhone 12, which means that the balance between forecast, supply and demand has been hit by Apple. Try to imagine a customer first telling you: "Oh look, we're going to sell less this year, cut my supplies by 20%." You, as a good factory, take that 20% of lost production capacity and immediately sell it to someone else, like the US military or Apple. Then the first customer comes back saying: "I got it all wrong, I have nothing left of the warehouses, isn't it that I increase production by 40% compared to before?" and you manufacture you have no more space to satisfy it. 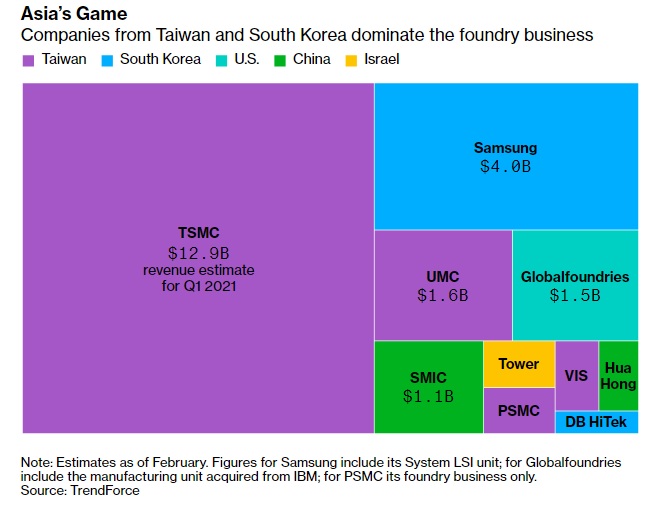 But then the problem lies only in the production? Are the raw materials from which these components originate all right?

For consumer electronics, yes. For cars, we have to make a different speech: the transition to electric cars is considerably stressing the extraction capacity of the elements necessary for the construction of batteries. Technologies are being developed that are less and less dependent on these materials in the years the whole process will stabilize.

Obviously, being different products, everyone has different needs. AMD found itself inside the perfect storm. All of their chipsets are built by the Taiwanese TSMC factory. This factory, in the summer of 2020, had doubled its delivery times: from about 3 months to 6 months. It also has the task of manufacturing the entire line of AMD processors, AMD graphics cards and the chipsets of all next gen consoles. All with the same technology. Nvidia does not fare better by relying on Samsung as a manufacturer, having a very underpowered production compared to the requests. Nintendo, being based on an older production process, run in and with a stable production compared to requests, has not suffered problems. Intel, having its own factories and a milder demand in the consumer sector, has no problems. At the moment. The automotive market is exploding and imploding at the same time as already mentioned, between the transition to electric cars and the growing need for batteries and electronics.

When will all this end?

So when exactly will it end?

Hard to say. The problem is shifting to components costing $ 1 each. Devices found in practically everything. Let's talk about display driver, responsible for managing screens, e voltage regulators to manage the energy flows of the components. These are built with outdated but super tested and tested methods and trying to alter them is a huge challenge. By the end of the year it is assumed that this problem will also affect Intel, which has resisted for now thanks to its factories. Some governments have realized that basing 80% of global chipset production on 3 cross factories is something that is not going to last. TSMC has announced investments for 100 billion dollars in three years to expand its production capacity. Intel will build a new manufacturing facility in Arizona for 20 billion ed will offer its factory services to third parties.
According to several experts, the situation should improve by 2023. But if there are other inability to predict supply and demand, we will have problems for the whole decade.

Yes, but when can I buy a console without fainting or waiting for bots in chats?

What do you buy consoles to do that there are not yet next gen games. They are all postponing them. Don't be in a hurry.

And to get my computer back?

Pray for the virtual coins to crash so the market will be flooded with GPUs used for mining. Right now the hope is the pre-assembled system integrators, which have priority channels over the shop that sells the single component.

But aren't the GPUs used for mining worn out and therefore useless?

In general they are calibrated to be able to operate 24/7 in higher efficiency regimes. Once recovered for gaming, if you let it work at a more relaxed pace, playing well with the settings and after a replacement of thermal paste and control to the heatsink, they still prove to be functional.